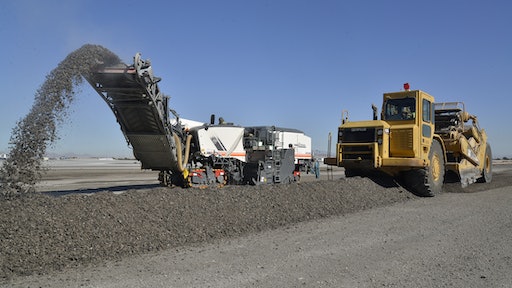 Instead of five to six haul trucks recirculating, Las Vegas Paving uses two paddle wheel scrapers to pick up windrows of RAP and deposit the material on airfield unpaved areas, where it will be compacted and used for erosion control.

The cold milling, performed by the General Contractor Las Vegas Paving Corporation, was among the initial steps in Phase I of the $65 million rehabilitation of the airport’s longest runway, the 14,505-foot east-west Runway 25R/7L. The runway is 150 ft. wide with 50-ft. shoulders.

The work is being undertaken in two phases, for a total of 12 months, with work split over two years. The runway – the third-longest commercial airport runway in the United States – is shut down for reconstruction through May 1, to be reopened for the summer months, and then closed again Oct. 28 through May 1, 2016.

Prior to its closure, about one-third of all takeoffs and landings at McCarran involved the closed runway. In addition to conventional sources, portion of the project's $65 million price tag will come from funds generated from McCarran Airport's slot machines.

“We’re milling and removing the runway, and paving it back,” said Bill Magee, project superintendent, Las Vegas Paving Corp., Las Vegas, Nev. “We’re not stopping the mills to load trucks, but are running the mills as one continuous operation. The mills are placing reclaimed asphalt on the ground, and we’re picking up the RAP with paddlewheel scrapers, which are placing the millings on infield areas for erosion control.”

The millings will remain permanently in those areas, Magee said. “They are spread 4 in. deep and compacted,” he added. “Proof-roll compaction to consolidation is all that’s required, with no exact compaction ratio; it will be used for erosion control, so you don’t want 100 percent compaction.”

Paddlewheel scrapers were selected because the RAP was destined to stay on-site. “Keeping up with the mills using the scrapers is less expensive than loading on five or six trucks, dumping in the infield areas and looping them around,” Magee said. “Paddlewheels are more expensive, but our efficiency paid dividends as we are using only two, one for each mill, as opposed to six trucks.”

Two Wirtgen W 250i cold mills with 12.5-ft. drums were being used for volume milling. The W 250i is Wirtgen’s largest cold mill, incorporates high-performance production and control systems, and is Tier 4 interim emissions-compliant. “Time requirements on the job are very tight, as paving takes place even as milling continues,” he said, “We are cutting 100,000 to 120,000 sq. yd. every day, six days a week, 10 hours each day, with these two mills,” he said.

The existing runway had a 2-in. friction course, with approximately 15 to 17 in. of asphalt pavement below, with another 4 to 6 in. of aggregate base. “Our requirement is to remove the asphalt, and regrade the surface of the aggregate base for placement of 19 in. portland cement concrete pavement,” Magee said.

Of that 17 in., Las Vegas Paving was cutting 5 to 6 in. deep with each pass. “The material appears to be very hard in the initial two passes,” he said. “Aircraft have been landing on it for 15 years since it was last paved, so it’s heavily compacted. Once we get through to the lower surface it comes out faster,” he said. “But the subsurface conditions vary. For example, in one area we found an old road that had been paved over, and we had to take it out as well.

One operator attested to the toughness of the asphalt surface. “We’re going only 20 to 22 feet per minute, as opposed to 50 feet per minute normally,” said Michael Koja, operator.

“I love this machine,” Koja said. “It runs like a Cadillac!  It’s really simple to run and operator friendly. The platform displays everything I need to see, and the controls are really simple.”

The Wirtgen vacuum cutting system (VCS) -- which reduces wear on cold milling equipment while enhancing the work environment immediately around the cold mill – was Koja’s favorite feature of the machine.

The VCS extracts fine material particles at the cutter drum by creating a negative pressure in the drum housing. The mix of air and water vapor is evacuated and then fed back into the flow of the milled material transported on the conveyor via a hose system. Better air quality and visibility in the working environment of the machine operator and ground crew members significantly improves crew comfort and productivity, while wear and tear on the machine is significantly reduced.