Why to Phase a Project in 27 Segments 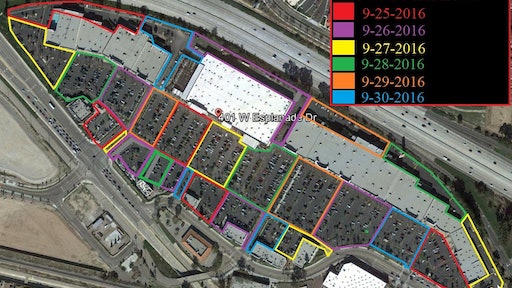 Sometimes it’s not the job that’s the challenge but the preparation for the job.

That was the case for Rose Paving’s project at the Esplanade Shopping Center in Oxnard, CA, which is the recipient of Seal & Stripe: Large Job Award for 2017.

“The shopping center has more than 40 tenants including Nordstrom Rack, Dick’s Sporting Goods, T.J. Maxx, The Home Depot, Walmart Neighborhood Market, each of whom has needs and requirements specific to their business and to their lease agreement,” says Scott Shaw, director of sales, Pacific Division for Rose Paving, Bridgeview, IL.

That meant negotiating a potential minefield of store hours, high-traffic days (and hours) that varied from tenant to tenant, required store access and parking availability, and basically making sure all tenants were on board with the plan. Then Rose Paving had to execute the plan.

Shaw says negotiating work phasing is nothing new to Rose Paving – nor is it new to most commercial sealcoating contractors. But the size of the job and the number of tenants and their varied lease agreements created a hurdle Rose Paving needed to leap.

“It was a huge work in progress between Rose Paving and the property manager. We’d put a phasing plan together and present that and it would work for some tenants but not others, so we revised it and presented it again, then revised that and we kept at it until we had a solution that satisfied every tenant and the property manager and that enabled us to meet our production targets.”

He says that even once the project was underway Rose Paving made adjustments based on requests or complaints relayed from tenants to the property manager to Shaw and Danny Espinoza, project manager.

“We totally understand that because these stores all have sales goals they’re trying to hit and our work was disruptive. We didn’t want to hurt their sales numbers so if someone asked us to make a change we did,” Shaw says. “We based our plans on tenants’ needs, and we adjusted them during the job. Whatever they needed we gave them.”

Rose Paving divided the project into six 24-hour phases, which meant crews would be starting and completing work on roughly 160,000 sq. ft. of pavement each day. The parking lot was divided into 27 workable areas, and each phase included as many as seven workable areas, but areas were spread out strategically to minimize disruption.

“Staggering the workable areas each day ensured traffic flow could get from one end to the other at all times and enough entrances into the shopping center to accommodate the daily traffic.”

Once the phasing plan was in place, Rose Paving hit the site at 6 a.m. each day for six consecutive days, blocked off that day’s work areas and delineated traffic routes through the parking lot.

The crew, which ranged in size from 8 to 10 people, cleaned the pavement in each day’s designated areas, then applied two coats of sealer, the first by squeegee and the second by spray. To aid production the sealer supplier provided product at the site each morning.

He says that the size of the property was a challenge but the biggest challenge, and what makes the job stand out from other work, was coordinating with the property manager and the tenants.

“The center is big and very busy so thousands and thousands of people shop here on a daily basis. We disrupted all of them every day we were out there by blocking off access to stores or diverting driving routes through the parking lot, and our goal was to minimize disruption and get off the property as quickly as we could.

“Once we got all the 40-plus tenants on board with the same plan we had to execute it like we said we were going to,” Shaw says. “Because that’s how we were able to get them to agree to the phasing, by promising we’d hit our target numbers and deadlines and have the areas they were concerned about reopened on schedule.”

The 50-page book will outline the components of a successful sustainability program, along with guidance for developing and implementing a sustainability plan, as well as for reporting on plan progress.
NAPA National Asphalt Pavement Association
November 7, 2019
Follow Us