How to Preserve Low-Volume Roads 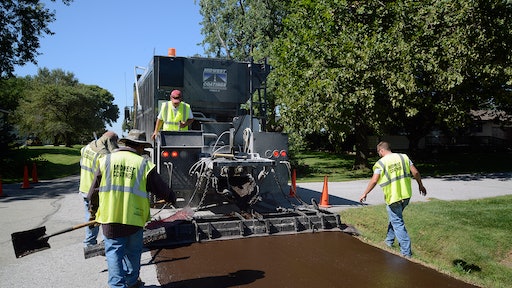 A pavement maintenance contractor in the upper Midwest is helping small municipalities preserve their pavements with value-added pavement surfacings.

Early last fall, Midwest Coatings prepped streets of Farragut, Iowa -- in the southwest corner of the Hawkeye State -- for winter with a series of road repairs, followed by slurry surfacings.

"We had been to Farragut in late summer to repair edges sloughing off into drainage ditches," said Tracy Thompson, president, Midwest Coatings Co, Inc., Modale, Iowa. "We milled that out and placed hot mix asphalt for repairs, and returned to surface the pavements."

"We are placing a CSS-1h emulsion using a 3/16 minus limestone aggregate," Thompson said. "It's very fine, and limestone is the most readily available aggregate in this area. It leaves a nice, finished surface, and it's DOT-approved. When we can, it helps to use the same material on every job, as it keeps us from having to calibrate equipment each time."

Farragut is located in Fremont County, Iowa, and in 2010 had a population of 485. As such, generating funds for infrastructure work can be difficult. But these street resurfacings were funded in part by a state grant.

"Most municipalities in Iowa receives a state Road Use Tax for pavement work," Thompson said. "Some will skip work one year and combine projects the next. That's what happened here, when our work on New Orleans from 2015 was combined with Webster in 2016."

And the work in Farragut was ideally suited for pavement preservation with "the right treatment on the right road at the right time," as promulgated by FP2 Inc. and the National Center for Pavement Preservation. The streets were in relatively good shape, perhaps losing small aggregate from the surface, but eminently serviceable.

"Now is the time to put these treatments on these streets," Thompson said in early autumn. "Their timing is right. You will see a lot of chip-sealed streets in these towns, but Farragut laid hot mix asphalt, so we have a nice substrate on which to place these slurry surfacings. A lot of times someone will try to slurry an existing chip-sealed street. They will be in pretty bad shape sometimes, and they're not ideal candidates."

In addition to street prep, getting the slurry pavers ready is the first task of the day. Thompson's crews were prepping two VSS Macropavers for the work ahead.

"We went ahead and loaded the trucks with oil in our shop, and are loading them with rock and getting the box set up for the right width in the town," Thompson told Pavement Maintenance & Reconstruction. "One street is 18 ft. wide, the other is 20 ft. wide, so we have to adjust our box as it's normally a bit wider."

A test strip will be about 100 ft., to confirm all is set to what it should be. "We make sure everything is looking right, and working the way we like it," he said. "Then we'll continue with the placements."

A minor amount of hand work with squeegees was required, and before that, branches were trimmed. "The city had a bunch of trees that were hanging over the streets more than we'd like, so they were kind enough to do tree trimming before we arrived," Thompson said. "These trucks are pretty good-sized, so we need ample space above to get clearance."

In advance of brooming, Midwest typically will seal cracks larger than 1/8-in., but on this project there were none. "If there are cracks larger than 1/8-in., we will rout and seal those," Thompson told PM&R. "But those were nonexistent on this job, and because the slurry design we are using will fill any cracks that are smaller than that, routing and sealing was not necessary."

Logistics plays into how Thompson programs his work. Midwest Coatings was placing the slurry surfacings in Farragut in the late morning, and then would move to another job site later that day as the season was coming to an end.

"This morning we traveled about two hours to get to Farragut," he said. "Our next move this afternoon is about six hours away. Our goal is to get this work wrapped up so we can mobilize to our next project."

Midwest Coatings is relatively new to slurry surfacings. "We started slurry sealing about four years ago," Thompson said. "The state of Iowa began combining slurry work with other types of work that we already did, and we felt that we would be missing out on some business if we didn't do slurry. So we jumped into it, buying two VSS Macropavers in 2013."

At first Thompson considered buying used equipment. "I found myself on top of a slurry paver in the pouring rain in a really bad neighborhood in Miami," Thompson said. "My wife was sitting in a rental car looking at me, thinking 'what are we doing here?' It was then that I realized slurry seal machines are not something you buy used. You go new. The manufacturers will provide so much help to you as you learn to use them, and VSS has been really good about helping us with every aspect of the machine. We underwent a learning curve the first year, but now we have it down."

"Chip seals typically can leave loose aggregate," Thompson said. "We've used that to our advantage to promote slurrying instead of chipping. But we also chip-seal. So if we have a situation where the customer wants to do a cape seal [a slurry or micro surfacing placed over a fresh chip seal] then we are equipped to do it."

Midwest had the slurry assemblies mounted on Peterbilt 348 chassis, also new at the time. "You can put the assembly on anything you want," Thompson said. "We already had a relationship with a Peterbilt distributor, so with the assistance of VSS, we got them spec'd out exactly the way they should."

Midwest's VSS Macropaver assemblies are equipped with an 850 gal. oil (emulsion) tank on the driver's side, and an 850 gal. water tank on the passenger's side. An aggregate bin is located behind those tanks, and an operator's station is at the rear, with the pug mill situated right there.

Emulsion, water and aggregate are combined at the pug mill before entering the towed box, which places the slurry surfacing. "We also have a fines feeder if we want to introduce portland cement per the mix design, and there's also an additive tank," Thompson said. "In Farragut we are not using cement or additive."

The asphalt emulsion already contains water, but additional water is added depending on ambient conditions. "As the temperature and humidity changes throughout the day, you may need to add a little bit more water," Thompson said. "It also depends on how much moisture is in your aggregate. You may need to adjust the mix as weather conditions change."

Nonetheless, the slurry primarily is the asphalt emulsion with aggregate, with water dosed as needed. The CSS-1h emulsion used was not polymer-modified, and was breaking within an hour, with no traffic allowed until the break. "We came out days earlier with flyers to notify the residents on the streets on which we were working," he said. "You have to make sure everybody is on the same page."

In addition to slurry surfacings, Midwest has the ability to do micro surfacings with its Macropavers. "We also do a lot of what Iowa calls 'slurry leveling'," Thompson added. "If you have transverse cracks that are causing vibrations, we will slurry those transverse cracks. We also will do a strip slurry seal down the centerline or shoulder joint." Iowa specs on these processes may be seen here: http://www.iowadot.gov/erl/current/GS/content/2319.htm

It has 17 routers, all Crafco products, and six 400-gal. Bearcat crack filling machines. In addition to two older Bart Mills, set up for multiple-sized heads, Midwest has a Wirtgen W 600 small cold mill with conveyor, used for patch work.

Midwest Coatings also operates two, 2,000-gal. distributors from E.D. Etnyre & Co. used for chip sealing and fog sealing. One was used in Farragut to supply emulsion as the job was too small for a transport drop. A new Weiler Model 385 intermediate-size paver also is used by Midwest for city street paving and spot overlays on higher volume pavements.

Tom Kuennen is a freelance writer in the surface transportation industry and can be reached at www.expresswaysonline.com.