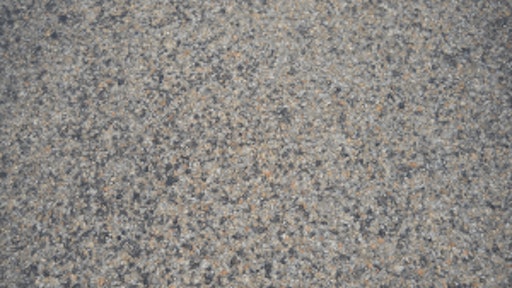 A close-up of the highway's three-course surface treatment that included the use of CRS-2P, a cationic rapid setting type of emulsified asphalt modified with the addition of polymers, and expanded clay lightweight aggregate (LWA).

Daily rains, high tides and south winds of hurricane caliber had taken their toll on Louisiana Highway 3147, a coastal marsh state highway in Vermilion Parish. Located along the Gulf of Mexico, the road was disintegrating under the constant exposure to water, causing washouts and soft spots. With daily maintenance needed to allow motorists to safely travel the posted speed, the state decided it was time for improvements.

The Louisiana Department of Transportation and Development (DOTD) ordered a 12-inch limestone base and a three-course surface treatment for the five-mile stretch of road. A flexible pavement was chosen for the site, considering the coastal marsh climate and the flexibility of the existing aggregate surface.

The three-course surface treatment included the use of CRS-2P, a cationic rapid setting type of emulsified asphalt modified with polymers, and expanded clay lightweight aggregate (LWA), a product from nearby Big River Industries in Erwinville, LA.

In three applications, CRS-2P was sprayed onto the new asphalt road surface and covered with a layer of expanded clay LWA. Finally, the road surface was rolled using a pneumatic rubber tire roller to embed the aggregate into the asphalt.

"The three-course treatment used two applications of size 2 LWA, with a smaller, size 3 expanded clay LWA applied over top to help fill in any gaps in the size 2 aggregate," says Terry LeJeune, a representative for Big River Industries. "This provides more skid resistance and makes the road safer, which is important under the wet conditions motorists regularly experience on this road."

Applied by subcontractor P.R. Parker Co., this was the first three-course treatment the company did for the state, and one of the first company President Phillip Parker says he knows of being installed in Louisiana in at least 10 years.

"Louisiana has put a lot more money into road preservation using chip seal," Parker says. "This surface treatment seals the surface of the existing pavement to keep water from infiltrating into the base and subgrade, which would cause the road to fail.

"Water acts as a lubricant on the soil and base below, and allows it to move, and that's what causes rutting and other base failures," he continues. "I believe the state chose a three-course chip seal treatment for the road along the coast, because it does have more water on it than other roads."

Expanded clay LWA, produced by Big River Industries, Inc., has been used widely on all types of asphalt roads in the past 40 years, exceeding more than 3,000 miles of asphalt pavement annually. LWA has been used in more than 20 states because installation costs are competitive with, and LWA offers many advantages over, ordinary aggregates.

The quality of expanded clay LWA results from a carefully controlled manufacturing process.

In a rotary kiln, selectively mined clay is fired in excess of 2000 degrees F. The clay expands, cools and is then processed to specified grading. The result is a high-quality, lightweight aggregate that is inert, durable, tough, stable, highly insulative and free-draining, ready to meet stringent structural specifications.

Routinely, a 20% longer life can be expected due to the LWA-asphalt bonding improvement. Expanded clay LWA has an ionic affinity for bonding to asphalt because of its surface charge and its rough, ceramic microsurface texture.

In addition, it can be easily wet down before application to the asphalt to eliminate dust from adhering to the particles and preventing bonding, unlike natural aggregate, which is coated with dust.

According to Harold "Skip" Paul, director of the Louisiana Transportation Research Center, expanded clay LWA performs as well as any other aggregate, based on surveys evaluating LWA and other aggregate applications on roads over a 10-year span. "In fact," Paul says, "It may even perform better in some cases."

Natural aggregates polish, becoming slick under the wearing action of traffic. Conversely, expanded clay LWA is a ceramic material that is porous throughout, so as it wears, fresh interior cells with rough edges are continually exposed.

"Think of it as a sponge, which has holes throughout its thickness," explains Jeff Speck, vice president of sales and marketing for Big River Industries. "If you cut the sponge in half, you still expose the holes.

Expanded clay LWA is surrounded by a ceramic matrix that is hard. Those holes and the surface together expose a rough texture. It never polishes because it is not a solid particle, whereas limestone is a solid particle."

Under a number of friction tests conducted by researchers at the Louisiana Transportation Research Center, Paul says there was no comparison to LWA.

"Lightweight aggregates had the highest friction numbers; they scored 20 to 30 points above any other material out there," Paul says. "It is the safest material from a friction perspective."

At one point during the three-course chip seal treatment on Louisiana Highway 3147, Parker and his crew had to stop working because a herd of cattle were being driven down the road by some horsemen.

Aside from those unexpected visitors, the remote location of the job proved to be the main challenge, with a pontoon bridge to maneuver across and special considerations to get equipment to the site, Parker recalls. With little access to crushed limestone in the vicinity and the ready availability of expanded clay LWA, the choice of which aggregate to use was clear.

"An advantage to using the lightweight material was the freight in trucking costs," Parker says. "It performs as well as any other materials, and it is a whole lot less expensive to haul to the job, and in Southern Louisiana, where there is no natural stone, it is a major concern."

Expanded clay LWA is typically half the density of natural aggregate, resulting in one ton of LWA yielding twice the volume of natural material. This translates to half of the costs to haul LWA, resulting in fewer drivers and trucks being assigned to the project, as well as less disruption to motorists.

"We can haul twice as much LWA in one load as hard crushed stone, from an economic and environmental standpoint, you're burning a lot less diesel fuel to get material there when you use lightweight." Parker says. "I recommend using LWA whenever geography makes cost a major issue and when skid resistance is a necessity."

LWA offers lower direct and indirect costs over the service life of the road. According to LeJeune, the key to a successful chip seal maintenance treatment is to take care of it before roads are too far gone.

With the success of Louisiana Highway 3147 coming on the heals of the research conducted by the Louisiana Transportation Research Center, it seems likely expanded clay LWA will become a commonality on other roads in the region and other parts of the country. ƒÞ

The CSV does not require a permit to transport so the unit can be transported legally at all hours with an 8-ft. 6-in. maximum transport width.
Rosco - A LeeBoy Company
March 8, 2017

The award recognizes the highest quality of workmanship and compliance with the best standards of practice when using asphalt emulsions.
Asphalt Emulsion Manufacturers Association (AEMA)
April 22, 2014

Crafco has industry-leading crack sealing products to help you get the most from your efforts. Rout-Clean-Seal to double sealant service life!
October 1, 2020
Chip Seal Equipment & Materials