Milling machines are generally used in pavement preservation projects to remove an old worn surface in preparation for a new hot mix asphalt overlay, but the Buffalo Creek Bridge project called for total removal to accommodate a roadway realignment. 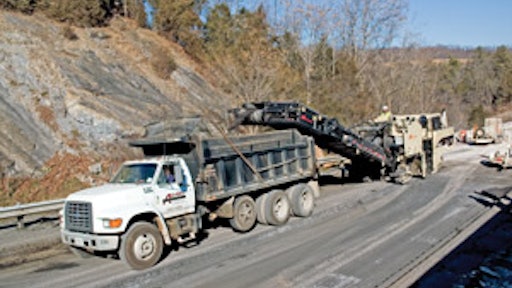 When the Virginia Department of Transportation let the Interstate 81 Buffalo Creek Bridge project near Lexington in 2006, new pavements were required on both the northbound and southbound approaches to the twin bridge structures, and those new pavements required milling to remove old pavements. What's interesting to note about this project is that it was not your typical "mill and fill'' road restoration.

The $27.1-million I-81 Buffalo Creek Bridge project called for replacing the two existing northbound and southbound two-lane bridges, built in 1966, with three-lane bridges to improve safety and traffic flow. The new bridges were constructed nine feet higher than the original bridges to level out the incline to and from the structures, and a 1.5-mile truck climbing lane was added to the northbound section of the highway to improve traffic flow out of the valley. The bridges were constructed adjacent to the existing structures, which called for realigning I-81 to and from the bridges. That's where Lanford Brothers entered the picture.

"We were hired to remove the old pavement approaches once traffic was redirected across the new bridges," says Al Soltis, vice president of Lanford's road maintenance division, which includes the company's milling operation.

While Lanford's typical milling project involves removing a worn and distressed surface course in preparation for a new HMA overlay, this project called for full-depth demolition of the asphalt pavement approaches to and from the old bridge structures.

"The old pavements were approximately 30 years old and 12.5 inches deep," Soltis says. "We used several different milling machines on the project, and it gave us a chance to try out a prototype of Ingersoll Rand's new MT-2000 milling machine."

Lanford has three Caterpillar, two Wirtgen and one CMI milling machines in its fleet, and since milling is such an important part of its service offering, the company is always interested in new technology.

"It's a good mid-class miller and worked well in a two-pass approach. It left a clean surface, with no stray millings behind the machine, and it delivered a good production rate in filling trucks," he says. "Our operators liked the operator's platform, the rear cameras and the safety features of the automatic stop sensors if anyone moves a foot in front of the tracks."

The MT-2000
The MT-2000 is a four-track, front-load, half-lane milling machine powered by a 600-hp Tier 3 Cummins engine. It offers three distinct drum cutting speeds, including a deep-cut power bulge feature that provides higher torque at lower engine revolutions per minute to power through tough material or deep-cut applications. A high-speed selection provides maximum speed on shallow cutting depths, while the standard cutting speed is used to provide maximum horsepower and efficiency at normal cutting depths.

The MT-2000 can run either a 78.75-inch or 86-inch drum, with both drums available with weld-on or quick-change tooth holders, and fine or standard tooth spacing patterns.

The dual operating stations on the MT-2000 have four-way sliding seats and console storage compartments. The control panels adjust to accommodate an operator who is seated or standing, and move laterally for ergonomic operation.

Putting it to the test
Lanford had to remove approximately 11,000 tons of asphalt on the realignment project.

"We had to remove the full-depth of asphalt on the 12-foot-wide travel lanes and the adjacent shoulders," Soltis notes. "In some areas the roadway was 30-feet wide and we had to deal with grade issues leading to and from the old bridge structures."

The old southbound bridge approaches represented a bulk of the milling required on the project and Lanford's milling crew attacked the project by milling down the grade in one pass and then back up the grade in the second pass.

"We were able to load a truck in about a minute and a half with the MT-2000," Soltis says. "At times, we also ran the machine in tandem with our other milling machines during the two weeks we were working on the project."

For Lanford and Ingersoll Rand, the project provided an opportunity to test the new milling machine.

"We always welcome the opportunity to test new technology and I think Ingersoll Rand was interested in finding out what our operators thought of the machine. They (IR) were very interested in operator comfort and any improvement suggestions we had to offer," Soltis says. "They spent a lot of time talking to our operators during the two to three weeks we were testing the machine, and we felt the machine performed well as a medium-sized milling machine."

According to Jerry Brown, project manager for C.W. Hurt, removing the old pavement approaches was essential to accommodate lane expansion of the new approaches to the bridges, and also facilitate restoration in completing the project by July.

"With widening the new bridges to three travel lanes and adding a truck climbing lane, we did need some of the old right-of-way," Brown says. "But before we could build up the base to match the new elevation of the bridges, we had to have the old pavements removed. And the old right-of-way not used in the realignment has to be restored to natural vegetation. So, when this project is completed, you'll never be able to tell where the old bridges were located and where the old pavement approaches to the bridges were located."

So even on a full-depth demolition of a pavement to realign a roadway, milling machines play a vital preservation role. In the case of the I-81 Buffalo Creek Bridge project, the IR MT-2000 joined Lanford's milling fleet to not only remove an old pavement that will eventually be recycled into new HMA mixes, but also restore the land back to its natural state.

The upgraded RX-700e cold planer features the increased power of an 800-hp Caterpillar engine. The new Tier 4 Final engine does not require DEF fluid as a component of the after-treatment system, reducing the operation costs typically required at this emi
February 14, 2019
Follow Us