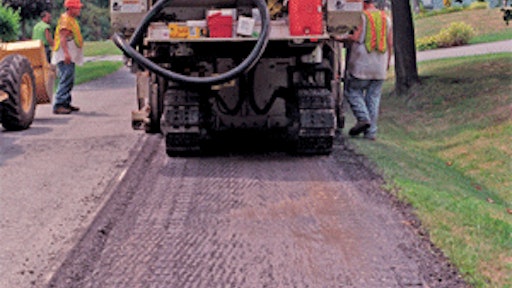 When the initial formations of the milling machine were developed in the early 1970s, Donegal Construction Corp. didn’t exist. Throughout much of the next decade, when these low horsepower, rear discharge cold planers enjoyed their heyday, the Greensburg, PA-based contractor was in its infancy as an asphalt paving and dirt contractor.

It wasn’t until the CMI Corp. ushered in the modern era of high horsepower milling machines with the industry’s first front discharge cold planer that Donegal even considered getting into the business. “Prior to 1989, we hired Adam Eidmiller Inc. for all of our milling,” recalls Don Pfeifer, vice president of Donegal Construction Corp. “We kept three of their five milling machines busy throughout the season.”

With company principals at Eidmiller retiring in 1989, Donegal officials saw an opportunity to expand the business in a new direction, so the paving contractor purchased its former vendor. The milling business turned out to be a natural fit with Donegal’s existing paving operations. This wise acquisition has paid off through expansive growth in the milling side of the business, which in turn has expanded the paving operation.

Although these machines would successfully grind off the existing road surface, they had several drawbacks. Low horsepower ratings limited productivity, and these machines could not keep up with the growing demands of contractors. Also, the rear discharge conveyor hampered visibility and raised safety issues.

“Terex Roadbuilding’s predecessor, the CMI Corp., introduced the PR500FL in 1989, and that was the industry’s first version of today’s milling machines, which include more powerful engines and front discharge conveyors,” says Jack. This was also the same year that Donegal saw the opportunity with Eidmiller and entered the milling business.

“At that time, we laid as much asphalt as any other large paving contractor in Western Pennsylvania,” says Pfeifer. “We had a lot of jobs requiring a miller, and we saw this as an opportunity to expand our business.” And expand they did.

When Donegal acquired the business, it inherited five milling machines, three of which were consistently tied up by Donegal’s paving crews. It wasn’t long before Donegal added three more milling machines to the fleet. Within five years, Donegal tripled the original fleet size, employing more than 15 cold planers and crews.

Through expansion of the customer base and purchases of milling operations in North Carolina and Florida, Donegal has grown beyond its Pennsylvania borders and operates throughout the Northeastern and Southeastern United States. With a fleet of 36 milling machines and more than 100 crew members, Donegal stands today as one of the largest milling contractors in the Eastern United States. According to Pfeifer, “Roughly 75 percent of our business comes from the milling operations.”

Variety is the spice

The growing demand for its milling services has caused a paradigm shift in Donegal’s business. The company now places more of an emphasis on its milling operations. With a majority of the business generated by the milling machines, Donegal keeps its cold planers busy in a wide variety of markets and applications.

The company’s main Greensburg facility takes care of business north of the Mason-Dixon Line, and its North Carolina operation, Delta Contracting, handles business to the south. Although the majority of business comes from Pennsylvania and New York, Donegal mills in states as far south and west as Alabama and Mississippi.

The company’s customer base and types of milling services offered are just as varied as the number of markets in which it operates. In addition to milling for its own paving operations, Donegal works for both public and private entities. This is why the company employs different sizes and brands of milling machines.

For its two to four feet wide utility cuts, the company relies on the older CMI PR500 cold planers, some of which date back to the beginning of its milling operations. With many city contracts, often Donegal’s half-lane machines are jumping from street to street, grinding off surface layers so a fresh overlay can be paved.

“Many cities will do an asphalt overlay of concrete to get a few more years out of the road before complete reconstruction,” says Pfeifer. “Many times we are back on the same road milling off the original overlay, so the city can get another few years out of the road.”

The company’s milling machines will also be found on the mainline, milling sections of highways and interstate for overlays.

However, the majority of Donegal’s jobs call for quick in-and-out completion, so the machines must be mobile.

Since the majority of the jobs require quick turnaround, all of Donegal’s cold planers are currently half-lane machines. The company’s version of a full-lane milling machine, according to Pfeifer, is two half-lane machines running in tandem.

One reason is the difficulty of transporting a full-lane milling machine. While Pfeifer concedes that all cold planers require a permit load, the half-lane machines can be transported in most markets as is. Full-lane machines require some component disassembly to move, which is more of a hindrance.

A second reason is versatility. With the multitude of jobs performed by Donegal each year, every cold planer must work in different applications. “We don’t always have the luxury of bringing in a perfectly-matched machine for the application, so our milling machines must be productive in multiple applications,” explains Pfeifer.

Another requirement for Donegal’s milling machines is to have the right weight-to-horsepower ratio. A productive cold planer needs the weight to keep it in the cut and deliver a properly graded milled surface. It also has to have the power to propel the cutter through deep cuts while keeping up production rates.

This is one reason why of the 20 Terex/CMI milling machines Donegal has in its fleet, nine have been the PR600 model. As a matter of fact, over the years Donegal has worked closely with the former CMI Corp., now Terex Roadbuilding, in testing and operating the PR600. “We actually saw the machine when it was on the drawing board and were one of the contractors to provide feedback before it was prototyped,” says Pfeifer. “We have worked through every issue with the PR600, and I can say that it is a well-balanced machine.”

The Terex/CMI PR600 differs from its milling ancestors in a number of ways. First, the machine is available in either a three- or four-track configuration. “There are a number of factors from price and operating expense to operator preference that go into determining which track configuration is the best for a contractor,” says Jack. “It’s our duty as a manufacturer to help the customer make the right decision for its operation.” Donegal uses the four-track design of the PR600 for machine balance and increased undercarriage service life.

Another departure featured in the PR600 lies in the exclusive cutter housing design. “The housing is shaped like a trapezoid with the bulkhead and moldboard tapered toward the cutter,” says Jack. “This reduces the amount of material retained in the housing, which lowers cutter and tool wear while enhancing production.”

The machine’s 48-inch-diameter, 86-inch-wide cutter drum delivers up to a 14-inch milling depth. The machine is capable of performing a full, 14-inch plunge cut, which aids in working close to obstructions. Forty-two-inch upper and lower conveyors quickly clear the cutting chamber of millings to help give Donegal the production rates it requires.

While weight is a benefit in the cut, it can be a hurdle when moving the machine from job to job. However, the PR600 meets most of the weight limits of the markets Donegal serves. According to Pfeifer, “All millers require a permit load. We can go just about anywhere we want to go with the PR600.”

With the grueling applications and high utilization rates faced by Donegal’s milling machines, the contractor expects the manufacturer to help support the equipment. The packed schedule means the company cannot afford a long-term breakdown. “We stake our reputation on keeping to the contracted time tables, and that is why we have many repeat customers,” says Pfeifer.

The company’s service department, one that would make most manufacturers envious, ensures Donegal will stick to the schedule. If a machine goes down and cannot be fixed in the field, that machine is taken to the service department and another replaces it to finish the job.

Although Donegal stocks most of the high wear items for its cold planers, the company still depends on the manufacturer for support of emergency breakdown issues. According to Pfeifer, “Just as we stand behind the service we provide, we expect our suppliers to support their equipment. Otherwise they will not be a supplier for long.”

Commitment to the customer, buying the most versatile equipment for the job and demanding the best customer support from cold planer manufacturers has been Donegal’s recipe for success. Since starting its milling operations 16 years ago, the company has experienced extraordinary growth. It now stands 25 times the size it was in 1989.