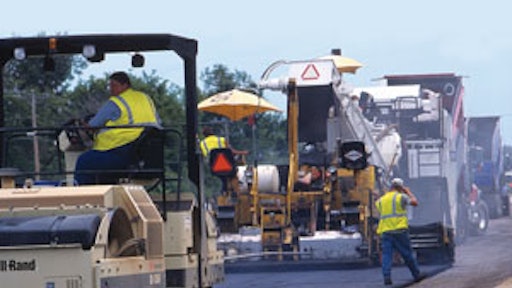 Wisconsin State Hwy. 14 located west of Madison has been just one of many state roadways undergoing a major transformation over the past few years. The highway is a major east/west artery in the southwestern part of the state for both commercial trucking and commuter traffic. The original Portland cement two-lane road was resurfaced in the early '80s with asphalt, but heavy traffic and Wisconsin winters turned the 20-year-old surface into a washboard ride.

This summer, Rock Road Companies of Janesville, WI was awarded the bid to rehabilitate a 12.2-mile stretch of the road from Mazomanie west to the Wisconsin River at a cost of $3.7 million.

In early June, initial grading began to accommodate several passing lanes designed into the project. On July 14, work on the actual road surface began as milling and paving crews started to transform the 30-foot-wide road into a new 40-foot-wide road.

Kraemer Company of Plain, WI used a Wirtgen W2000 and a Caterpillar PR 1000 milling machine to peel five inches of asphalt off the concrete road base. Working in tandem, the two milling machines deposited windrows of the milled material (approximately 60,000 tons) along the shoulder of the road to be used as part of the crushed based after the seven-inch-thick concrete road was rubblized by Antigo Construction of Antigo, WI. Antigo Construction is a pavement breaking specialist, and on this particular project, used Badger State Highway Equipment MHB Badger Breakers to rubblize the concrete.

Once the concrete was rubblized, Kraemer grader operators spread the milled asphalt back over the crushed concrete base and compacted it in preparation for Rock Road's paving crew.

Originally, the project called for three 1 3/4-inch mats — a leveling, a binder and a surface course — to be constructed after the milling and rubblization portion of the project was complete. Rock Road recommended changing that to a 3-inch leveling/binder mat followed by a 2 1/4-inch surface mat. The contractor did not think a 1 3/4-inch leveling mat would hold up to the projected 9,400 vehicles (many of them heavy trucks) that travel the road daily before the binder and surface mats could be put down.

Compaction, smoothness and completion were all critical factors in the project that required 103,000 tons of HMA. Safety and minimal disruption to the traveling public were also important considerations in how Rock Road needed to execute the project. Since it was a two-lane road with no suitable detour routes, construction had to be limited to a moving one-mile work zone, with flaggers controlling traffic flow from both ends.

It really required a cooperative team approach from all the companies involved on the project, notes Bob Kennedy, vice president of Rock Road. With the exception of some weather delays, the milling, rubblizing and paving crews have managed to travel close to one and one-half miles in a 10-hour day.

"When everybody and everything is in synch, we can cover some ground," Kennedy says. "That's the way it's supposed to work, and even when we run into a glitch from time to time, our goal is to be as efficient and productive as the equipment and crews allow us to be."