What You Need to Know about Updates to Milling Machines

Experts from Roadtec, Wirtgen America and Terex Roadbuilding discuss the silica issues and how it affects your equipment 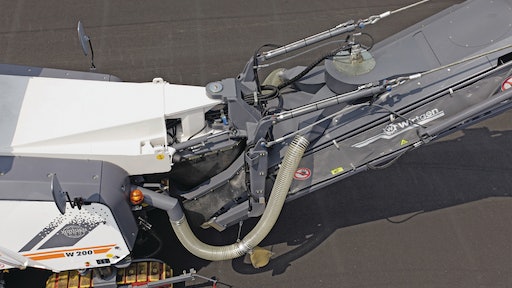 The basic configuration of the Wirtgen milling machine starts with a cutter drum inside the cutter housing where the asphalt is milled up, and that drum is constructed so the millings are augured to the center of the housing where it is ejected through a window onto a conveyor.

“Prior to the partnership being formed in 2003 there were some observations done by OSHA or NIOSH people where they saw a milling machine working on the East Coast and observed this plume of dust…” says Tony Bodway, operations with Payne & Dolan. “Prior to that, no one studied the silica or dust issue on milling machines.”

Soon, the team came together to begin research on silica dust and the use of milling machines.

“The first stages from 2003 through 2006 was trying to understand exposures, and in that process trying to understand where dust might be generated internal to these machines,” says Gary Fore, a retired NAPA Vice President for Environment, Health and Safety. “That was a technical exercise. We would bring engineering diagrams and turn these machines upside down, inside out. From an engineering point of view, we would also look at where dust can get generated.”

That led the team to look at the redesign of the water system in the machines. Some time was spent trying to figure out how to redesign the nozzle systems internal to the machines to get at the source of the dust.  In 2008, the team organized for a field trial in Marquette, MI using prototypes focusing on the changes to the water systems.

A third field test took place in 2010 in Shawno, WI. Each manufacturer brought their own set of nozzle system designs. The idea was to find and optimize the best system for capturing any dust that was generated during asphalt milling.

With the information gathered over the course of the research conducted by the Silica/Milling Machine Partnership contractors can expect to see updates to equipment involving the water spray systems and mechanical evacuation systems. The optimized dust control systems set by the team will help contractors provide a safe environment for their employees.

“It’s driven by safety, naturally, and the desire to limit the exposure of milling crews to any silica dust,” says Jeff Richmond, president of Roadtec Inc. “As manufacturers, we’re looking at what the most economical and effective way to eliminate silica dust emissions around milling machines.”

One key component of milling machines is the water spray system used for cooling cutter bits on the cutter drum, which can offer some dust suppression capabilities. To maximize the effectiveness of water spray systems, several alterations have been made to optimize the flow, pressure and nozzle locations.

According to Scott Lyons, engineering manager at Wirtgen America Inc., the Silica/Milling Machine Partnership recognized the importance of properly maintaining and operating milling machine water systems to ensure dust control. This focus led to the creation of a basic best practices guide for water spray systems to assist contractors when milling. This was created in 2008 when the team gathered in Marquette, MI for Mill Fest to test each unit’s water spray system.

While additional components continue to gain importance in milling equipment, it remained crucial to establish best practices information for the water spray systems. Regardless of milling machine modifications, water spray systems will remain essential to the milling process because it is an important element in cooling the cutter drums and cutter bits.

Terex made changes to include a piston-type pump that can develop higher pressures. “It is a positive displacement pump, and every rotation of the pump produces a certain amount of volume allowing us to optimize the nozzle placement of water and the penetration,” says Musil..  “If you run it at a higher pressure the water can get to where it needs to be quicker, and you are also using less water by having it go directly to the hot tip.”

For years the only means of dust suppression was through the water system. However, this was only a side benefit to a system whose primary design is to cool cutting teeth. “In some cases, the water hitting the hot cutter teeth turns into steam, which expands the volume to create a positive pressure inside the cutting chamber, which results in the dust escaping the chamber,” says Musil.

“Construction equipment manufacturers were already using vacuum system controls on asphalt pavers resulting from a similar successful partnership effort in the late 1990’s,” Lyons says. “It became evident that vacuum based controls could provide another level of reduction in airborne dust.”

With the focus turned to mechanical evacuation systems, Musil believed that the only successful option was to place the milling chamber under a negative pressure so that clean air from the outside would be sucked into the milling chamber while no particulate dust  would be released. “A fan was used to create the negative pressure,” Musil says. “The covered and side-sealed conveyors already on the machine were used as duct work, and the rubber flaps placed on the conveyors became section seals. I collected the dust in the air stream and it’s discharged into the truck where the  RAP millings from the milling machine are already going. Terex (CMI) had used a similar vacuum evacuation system on its milling machine in the 1980s.”

According to Richmond, from a design point the changes aren’t too radical. “We’re looking at the changes as an addition to our existing machinery, and it will be an add-on extraction system/fan system,” Richmond says. “We have currently engineered the addition into all of our Tier 4 powered products and will make this a standard feature at a point in time when NIOSH goes forward with its decision about regulation and compliance.”

While the water spray systems are generally efficient, Richmond believes the fan system will take dust suppression to the next level. Roadtec’s system has an independent hydraulic fan with a series of duct work designed to draw the dust out of the transition between the cutter housing and the primary conveyor as preliminary testing has verified that this is the best capture point for the airborne dust.

Wirtgen developed its VCS (Vacuum Cutter System) overseas to reduce dust collection in and around the mechanical systems onboard the machines. “The basic configuration of a half-lane milling machine starts with a cutter drum inside a cutter housing where the asphalt is milled up off of the road,” Lyons says. “The drum is constructed so that it augers the millings to the center of the housing where kicker paddles eject them out through a window in the front of the cutter housing onto a ‘pick-up conveyor.’  The pick-up conveyor then transports the millings and dumps them onto a ‘discharge conveyor’ that can be raised and lowered and swings from left to right for loading trucks.”

Contractors must still be aware that the water system of milling machines is the primary dust control system while the vacuum system provides a secondary level of dust control.

Contractors can expect to see a few changes with the implementation of the new components to the milling machines. Changes to any type of equipment often results in changes in price, maintenance and the possibility to retrofit older units.

With the new components, a price increase of about 3 percent is expected for both Roadtec and Wirtgen milling equipment. “When you add additional components to a machine, in this case this system, there will be additional cost,” Musil says. “We want to arrive at the best solution we can to protect our workers health—that’s number one. We are all in this together to improve our workers health.”

Roadtec’s new system will be available for purchase as an equipment option in January 2013. “The new system won’t be mandatory until NIOSH sets the date,” Richmond says. “Contractors need to be prepared when the regulation is written, and they need to be aware that in our opinion this process will move forward in the not too distant future making fans the industry standard.”

It is essential for contractors to be aware of the importance in maintaining and operating their equipment’s dust control systems properly to ensure the safety of their workers.