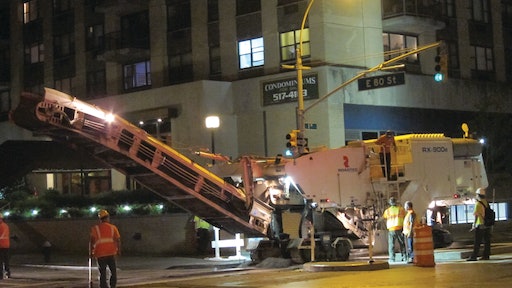 The Roadtec RX-900e milled the concrete at 1 inch deep, traveling at 35 to 40 feet per minute.

First Avenue in New York City has to rank as one of the busiest city streets in the world. It is a concrete roadway that spans five lanes wide; traffic runs one way to the north. The avenue carries passenger vehicles, taxis, buses and trucks that total into the thousands every day. Over the years, First Avenue in the city’s Upper East Side had become polished, cracked, spalled, faulted and patched with asphalt in various locations.

So the city decided to rehabilitate 52 blocks of the roadway, in a combined effort between the Department of Design and Construction (DDC) and the Department of Transportation (DOT). The most cost-effective solution, the city determined, was to mill down the concrete to level it out and overlay the surface with a special polymerized asphalt (see box).

Milling concrete is not uncommon, but it’s also not easy. When done with a regular asphalt milling drum, the milling machine slows to a crawl. Production is difficult and tedious.

Working at night, the milling machine could mill along, going about an inch deep, at 35 to 40 feet per minute, says Rule. “With this style of drum we could increase the ground speed, and increase their tooth life,” says Rule. “We were there for two nights, and in two nights they only changed maybe a dozen teeth. And the surface they got was beautiful. It was finely textured, and enabled them to get a good bond with the asphalt overlay.”

Tim Penza, project coordinator for Carlo Lizza & Sons, explains it this way: “The special drum gave us the ability to profile the concrete. We cut 8 feet wide with one pass. We went from a quarter inch deep at the crown to 1.5 inches at the curb. We cut 70 feet wide by 52 blocks, which is about 14 lane miles. The project stretched from 72nd Street to 125th Street on First Avenue.

“We micromilled, then we blew out and sealed the cracks with patching material,” continues Penza. “Then we put down 100 percent liquid asphalt tack coat and then a fiberglass fabric. The DOT paved the overlay on top of the fiberglass fabric; the overlay was 1.5 to 2 inches thick.”

Aly Lizza Jr., head of Lizza’s New York City Division, says: “Micromilling gives you a much finer finish. The finish is very fine and evenly grooved. It produces a completely different finish than you get by milling asphalt with a regular asphalt drum.”

The contractor closed half of First Avenue at a time, for a nightly working distance. “Our traffic patterns varied, depending on the arterial streets coming into First Avenue,” says Penza. “We had to square up every night, so we did some sections from curb to curb every night.”

Aly Lizza Jr. says he appreciates the job the milling machine did. “We really used the hell out of that drum on the concrete," he said. "It held up great though. Everything was new on this project. Milling concrete was new, the fabric was new, and the asphalt mix was new.”

Meanwhile, a Roadtec RX-100e utility milling machine was used to mill around manhole covers and other obstructions.

Eric Brown, Deputy Director of Roadway Paving for the Manhattan Division, New York City DOT, said the city offset the joints in the asphalt from the original joints in the concrete. So if the concrete panels were on 12-foot centers, the DOT set the asphalt paver at 14 feet wide. That measure helps prevent reflective cracking.

Brown said the micromilling enabled the asphalt overlay “to get a better bite on the surface of the concrete. It helped us create a better bond.”

Kraton Performance Polymers, in partnership with NuStar Asphalt, helped create a thin half-inch polymer-modified asphalt overlay for the $7 million First Avenue road resurfacing project, which included 53 New York City blocks, including bike paths and select bus service routes, along First Avenue from 72nd to 125th Streets. These streets have been resurfaced with a thin layer of highly modified asphalt (HiMA) that greatly improves pavement resistance to rutting and cracking - critical attributes for high-traffic roadways used by vehicles and pedestrians in any season, but especially in harsh, inclement weather.

It took the city three weeks of night paving to apply HiMA technology to 53 blocks of concrete, which allowed streets to remain open during the day versus shutting them down for several months and interrupting vital transportation systems.

"New York City DOT's First Avenue project posed a difficult pavement design issue - place a relatively thin overlay on a 30-year-old Portland Cement concrete (PCC) pavement, in poor condition, to maintain curb heights and provide a tough, but flexible surface to resist heavy traffic, climate and movements of the existing street," says Ron Corun, NuStar Asphalt's director of asphalt technical services. "NuStar proposed the use of a high-performance thin overlay (HPTO) mix developed at Rutgers University that has been in use for more than five years on various high-traffic roadways in New Jersey and has performed well.

"Conditions on New York City's First Avenue required a higher level of mix performance, however, so NuStar combined HiMA technology, developed by Kraton Polymers, with the HPTO mixture because of its outstanding laboratory results for both rutting and fatigue," continues Corun. "This combined with the flawless performance of a test section placed in 2012, gave our team confidence that the new pavement would meet the city's needs."

The completion of New York's $7 million resurfacing project is part of the city's $6 billion investment in nearly 1,000 projects over the past six years to keep road infrastructure in a state of good repair. When tons of sand and snow plows are factored into the daily stress and wear of New York's heavily trafficked thoroughfares during the winter season, they will now be more durable and resistant to rutting and raveling than ever before.