The Importance of the Milling Machine

The description of the equipment and process may not reveal the significant role that the asphalt milling machine plays in road construction, but it is key. 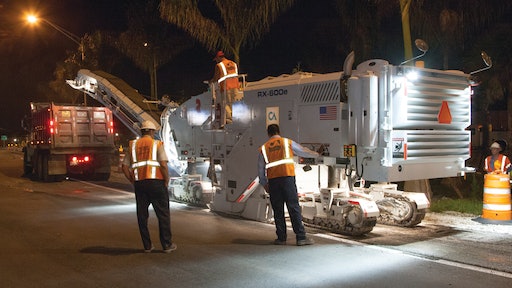 The asphalt milling machine — also known as a cold planer, pavement planer, pavement recycler, or roto-mill — is a construction machine used to remove bituminous pavement or asphalt concrete from roadways. The result is a somewhat rough but even surface that can immediately be opened to traffic.

The milled surface is accomplished by bringing a rotating mandrel or "head" into contact with the pavement at an exact depth or slope. The mandrel has hundreds of hardened spikes or teeth on its surface, which bite and cut away at the roadway's surface. The surface material that is removed is normally fed by conveyor into a dump truck or semi trailer, but can be left in place or windrowed to be removed or recycled later. A water spray system provides cooling for the mandrel, as well as dust management.

In the 1970s, Galion Iron Works, based in Galion, OH, manufactured the first production milling machines, which were called Galions. These first units resembled motor graders in shape and size. The difference was there was a 760 mm-wide (30-inches) milling head where the scraper blade would normally be. The cutter drum was set into action by a large hydraulic pump.

Asphalt milling is the process of grinding up asphalt that can then be recycled. The process came about because many streets were getting layered higher and higher as new surfaces were added, thus reducing the curb height and creating roadway drainage problems.

Early milling machines were simply a mining mandrel attached to a mobile undercarriage. They were designed to remove a layer of old concrete or asphalt so that a new layer could be applied to a better quality base than resurfacing over the old road surface.

From the start, the emphasis for milling machines was to place more power to the cutting drum, which is needed to remove more material. Thus, the cutter head itself and the cutting teeth designs became critical. The cutting teeth would dull fairly quickly and needed frequent replacement. The replacement process could cause enough downtime to greatly detract from the initial efficiency of the milling process itself. So manufacturers worked on designs for quicker replacement as well as increased durability of the cutting teeth. Different sized cutting drums were offered so that machines could mill at different widths.

Milling machines feature conveyor systems to collect the material during the milling process, thus reducing the labor of picking the material up from the roadway. Newer machines require two or more people to operate safely and efficiently. The operator stands on the deck of the machine and controls most of the machine's functions, while a worker on the ground controls the depth of the cut and keeps an eye out for obstructions in the roadway such as manholes and/or water valves.

Today's machines are bigger and more technologically advanced. They are designed to handle any asphalt aggregates in use today.  Depending on the depth of the cut, some of the larger machines can cut close to 15,000 square yards a day, at 75 feet per minute.

In addition to faster speed, added precision to the milling process has become important. The innovation of controls and automation has brought greater precision for controlling slope, depth and speed.

There is no question that the technological advancements made in microelectronics have benefited milling machines. Electronics designed to improve performance, include electronic sensors and a built-in cross slope. A pair of sensors can read a variety of references from 12 to 55 inches directly below the bottom of the sensor. Each sensor can be calibrated and adjusted from the ground level or at the operator's console.

The position of the rotor in relation to the grade reference can be constantly displayed on the central controller. Changes to the elevation controls include the addition of a raise/lower switch that is used when milling around obstacles. In many cases, the electronic control module monitors and regulates the performance of major machine systems, including speed, steering, rotor drive and other functions. If a problem occurs, a warning is issued.

Along with the electronic features that keep milling machines on track are the advances being made in the cutting end of the machines. The ability to change cutting drums quickly to achieve multiple cutting widths with the same machine is a benefit to contractors who may only need one machine to accomplish multiple job requirements.

Roadtec, for example, adds flexibility to its machines by manufacturing and assembling the milling tractors and cutters separately, allowing the contractor to choose from several cutter patterns and widths when ordering equipment. The cutter assembly is designed for quick changing of cutting pattern styles and widths.

Some machines also have the ability to mill in two different directions to accomplish different results. Traditional milling is accomplished in an up-cut direction. Roadtec machines, for example, can down-cut, which is designed to control slabbing, permit pulverizing and mixing, and can be an effective way to remove material over wet base. The down-cutting feature is also designed to convert Roadtec milling machines into cold-in-place recycle machines.

Today's milling machines also reduce the time required to change the all-important cutting teeth. Early machines had the teeth welded on, so tooth replacement required a fair amount of downtime as each had to be re-welded to the drum. Now, teeth are held in variously designed bolt-on housings that permit faster changing. Also, Roadtec machines come with an air compressor as standard equipment allowing the use of pneumatic tools for quicker tooth changes.

A relatively recent innovation to milling has been the introduction of micromilling. For example, Roadtec’s Roadrunner drum design is intended to provide savings in consumable tooling — the cutting teeth. The company claims that contractors can regularly mill all day without a need to change tooling and finish the shift with little or no wear on the carbide. Additionally, working speeds of 100 fpm and up with the drums producing straight line patterns that do not chevron out are said to be common with the Roadrunner.

A big benefit of micromilling that is shaping the future of road milling is that the micromilled surface is smooth enough for road users to travel relatively fast over the surface during construction. Contractors can open the milled surface to traffic and come back later with an overlay. Cold winter states especially can save the cost of patching in the fall by micromilling instead. They then can then get an early start in the spring with paving.

From its early days, the milling machine has had a dramatic impact on road construction. Ongoing improvements and innovations will continue to secure its preeminent role in road reconstruction.

Roadtec announced a new development to the Guardian Telematics System at World of Asphalt 2015. Since Guardian was first rolled out three years ago, it has been focused on up time and diagnostics.

This functionality has evolved and been to now include production reporting. This technology is available on the RX-600, RX-700 and RX-900 milling machines right now and will be coming to pavers very soon. Guardian Production will allow our customers to see in real time or at the end of a day what their production is on that machine. Guardian also shows the operator the exact amount of material they are loading into the truck in front of them eliminating overloaded or underloaded trucks. This saves the customer money in fines or poor truck utilization.

Also available on the milling machines, Roadtec provides the customer the ability to track cutter bit consumption. When customers replace bits, they can simply enter in the number and track it. All of this will give customers more visibility into how they are using their equipment and allow them to maximize their efficiency.