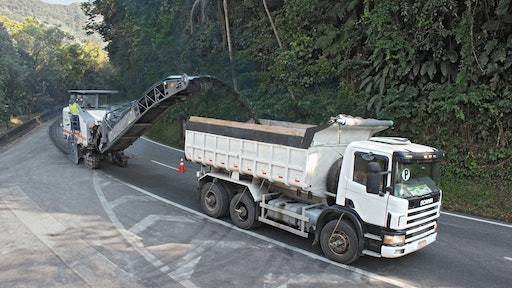 Site Manager Cleiton Farias de Jesus also appreciates the eco-friendly technologies of the W 200. They play a key role in ensuring that his company meets the ISO 14001 Environmental management standard.

The Anchieta-Imigrantes motorway system is the main link between the metropolitan region of São Paulo, Brazil, and the port of Santos, the largest port in Brazil and the busiest in Latin America. Construction of the Anchieta motorway began in 1947, with Imigrantes following at the start of the 1970s. Today the Anchieta handles mainly heavy goods traffic — 95 % of its daily traffic consists of trucks — while cars predominantly use the Imigrantes. Now the two motorways are being rehabilitated over a total length of 186 miles. The removal of the surface and binder course was handled by a Wirtgen large milling machine of type W 200.

The high proportion of heavy-goods vehicles and the significant traffic density place enormous strain on the asphalt surfaces, making regular maintenance vital. The contract for the current job was won by the Baixada Santista Consortium. The construction company CR Almeida, which is part of the consortium and responsible for the milling, worked alternately on both roads — northbound and southbound. While the W 200 milled the Anchieta motorway, which was closed completely, traffic was diverted to the Imigrantes motorway.

For this mammoth project, CR Almeida is using the efficient W 200 large milling machine, which runs in continuous operation 24 hours a day during the rehabilitation work. This is where the powerhouse can really put its enormous capabilities to the test. 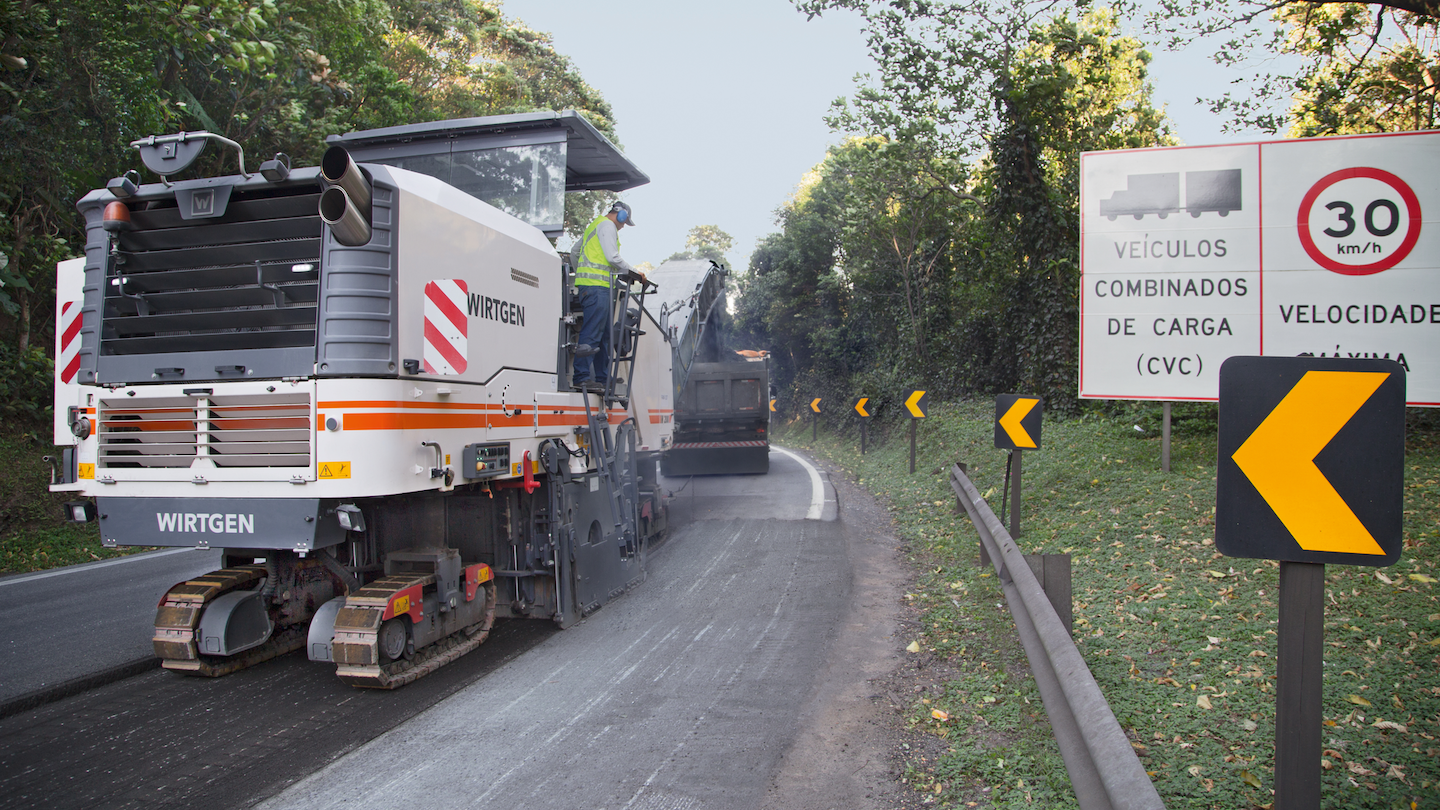 The W 200 large milling machine provides a wide range of applications from surface course rehabilitation through complete pavement removal to fine milling jobs.That’s because the W 200, with its powerful engine delivering a maximum power of 410 kW, is specially configured for high area outputs — whether on large sites or in confined spaces. The maneuverability of the large milling machine particularly proves its worth in the very narrow defiles that snake their way through the Brazilian uplands 25 miles south of São Paulo, so that the W 200 was able to mill both road surfaces over a width of 7 feet and to a depth of 3 inches rapidly and precisely in one operation.

Milling machine operator Janderson de Souza Mota emphasises the ease of handling offered by the WIDRIVE machine control system, which links the most important machine functions together. “While the engine, for instance, sets the operating speed automatically when the milling process is started, it automatically returns to its idling speed when milling is finished. This allows us to reduce not only fuel consumption but also noise emissions.”

What is more, the water required for cooling the cutting tools is regulated as a function of the engine load and milling speed. The load-dependent sprinkler unit allows a water saving of up to 20%. 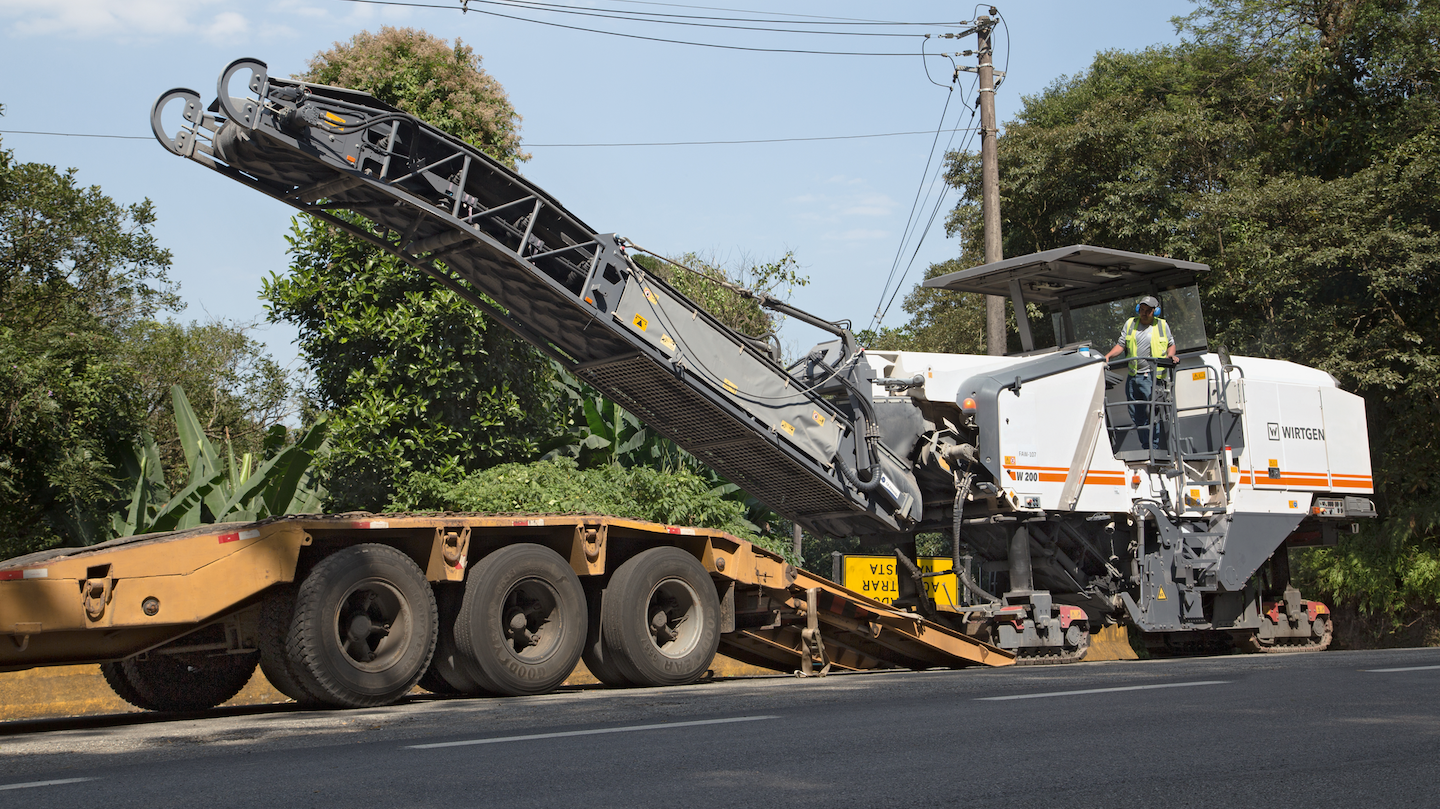 The variable tare weight and additional weights that can be added as required allow the W 200 to be carried even on vehicles with a low maximum permitted payload.“For us that means we need to fill up less water, but the service life of the cutting tools is still longer,” says the site Manager Cleiton Farias de Jesus, delighted with the much lower downtimes.

With the milling work on the Anchieta motorway having been completed faster than anticipated that day, the W 200 even made up time before it was to begin its scheduled night-time job on the Imigrantes motorway. So, without hesitation, Cleiton Farias de Jesus and his team stopped at Cubatao, just a few kilometres away, in order to mill a strip a few hundred metres long over a working width of 7 feet, but this time to a depth of 11 inches. “The site is on the way, and the fact that we can load and unload the W 200 quickly and easily enabled us to fit this little job in today.”

The folding loading belt, for instance, shortens the transport length of the large milling machine, so that it can be transported even on light low-bed trucks with a low overall weight. The weather canopy can also be folded in hydraulically for onward transport. 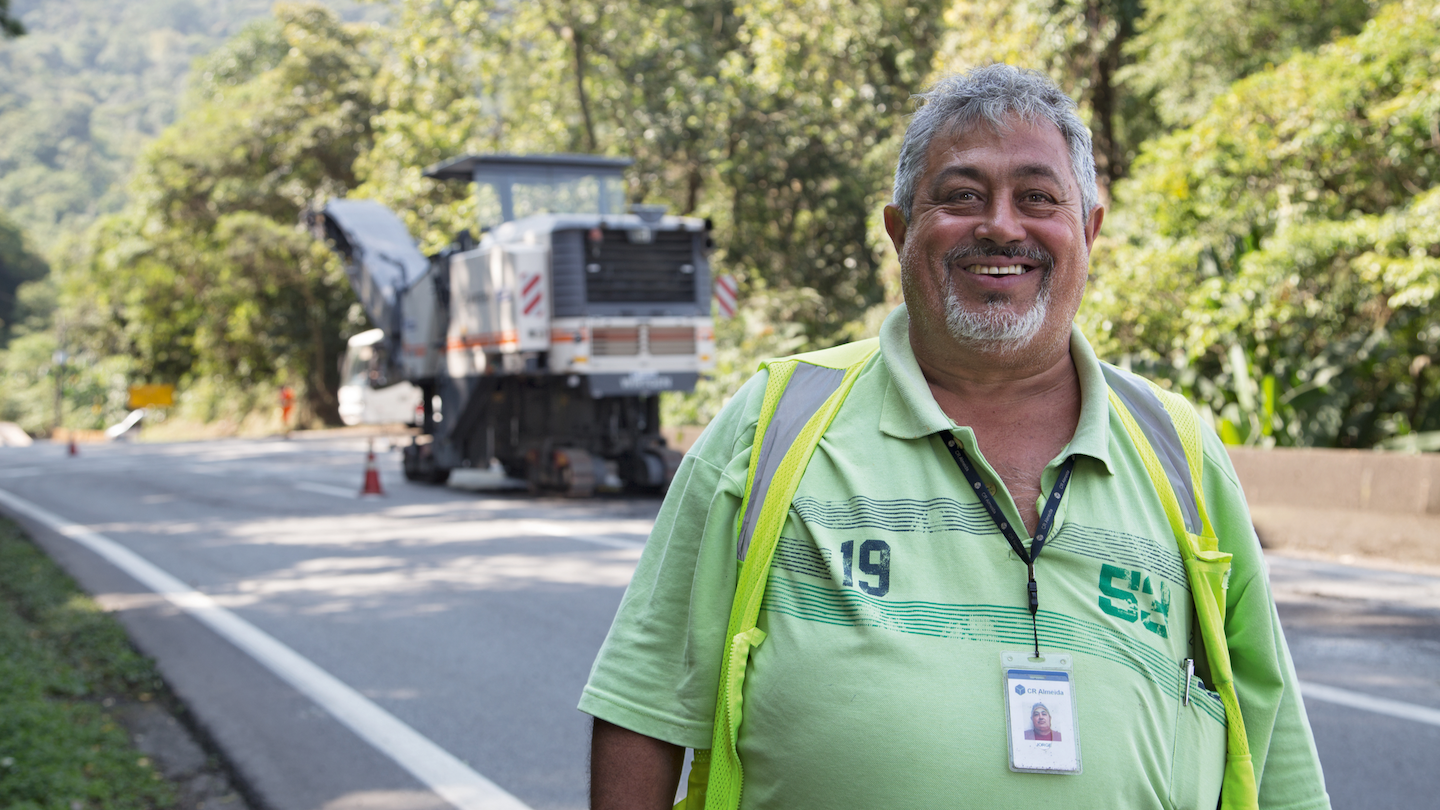 “We use the Wirtgen W 200 because it is extremely economical and can be deployed flexibly”, says Jorge Luis Dos Santos, Production Coordinator, CR Almeida Group.Site Manager Cleiton Farias de Jesus says, “Ease of transport is a decisive criterion and makes the logistics a whole lot easier. This way, we can move quickly from one job to the next and always make optimum use of the W 200’s capacity.”