A 1.5-in.-thick surface course needed to be renewed across the entire width along a 6-mile section of road in Italy 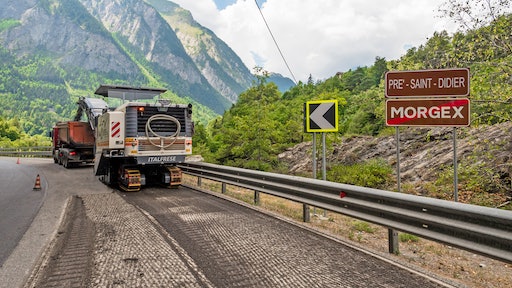 In this area, the Wirtgen milling machine was operating with a high milling drum speed and a high advance rate.
Wirtgen

Somewhat surprisingly, the Wirtgen W 220 large milling machine's first job in Italy did not take the high-performance machine to a highway but to a winding country road at the foot of Mont Blanc in the northwest of the country. It was at this location that the extremely powerful 577-kW machine made its mark, milling the surface twice as fast as scheduled.

The Strada Statale 26 (SS 26) stretches from the flat landscape of Piemont to the Alpine regions around Mont Blanc and includes a link to the Mont Blanc Tunnel. The road winds its way up to the Aosta Valley, reaching altitudes of almost 3,280 feet, and all sections are heavily trafficked both by tourists and freight traffic. It is used by an average of some 5,000 vehicles per day. 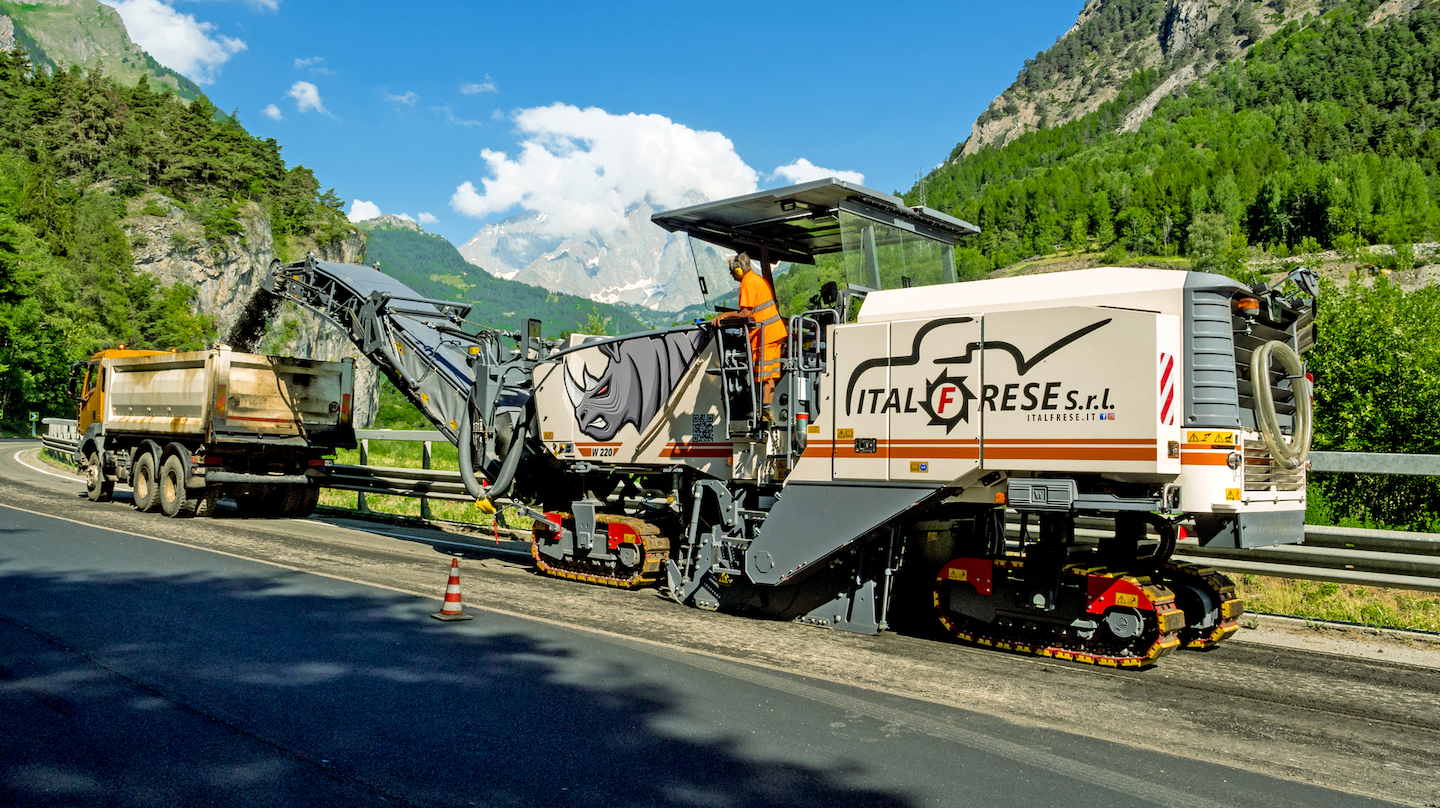 Thanks to the 7-ft. milling width, Wirtgen's W 220 was able to mill off the surface course across the full width of the roadway in just two tracks on most sections of the highway.Wirtgen

Full road closures are extremely difficult to achieve in the Alps, and so only one side of the SS 26 was blocked at one time when the road was rehabilitated in July and August 2018. But the contractor, Italfrese s.r.l., a Piemont-based company and one of Italy's largest milling contractors, was able to shorten the construction period by using the W 220. This is partly due to the machine ability to mill across 7 feet in a single pass, meaning that just two passes were required in most areas, rather than three. What's more, the milling machine operated at an advance rate of 92 to 98 feet per minute — even at inclines of around 5%. Ultimately, the milling contractor completed the milling work in just half the time that would have been estimated for one of the smaller machines usually used on confined sections such as those on the Alpine pass. And all of this without compromising on quality.

Ernesto Franco and Emanuele Franco, Managing Director and Technical Director of Italfrese, were well aware of the time savings when planning the job: "In the run-up, we investigated which of our 12 milling machines could complete this job as economically and quickly as possible. And the answer was: the new W 220. Though the milling machine was operating at quite a high milling speed, it had not yet reached its technical limits. The immense engine power and the sophisticated control system enabled the machine to mill at a constant speed, even in regions at higher altitudes and on hairpin bends — a feat achieved while maintaining a moderate fuel consumption.“

Milling performances like these are achievable thanks to the excellent weight-to-power ratio of the new W 220: An operating weight of 80,160 pounds meets an engine output of 777 hp.

Intelligent use of power

In addition, the powerful drive enables asphalt pavements to be removed not just layer by layer, leveling unevenness in the surface course or increasing the grip, but also by removing entire roadways down to a maximum milling depth of 13.8 inches in a single pass. The Franco brothers agree: "This extra power often makes all the difference on large, time-critical projects at airports or on highways." Particularly when operating at large milling depths, the W 220 has another handy feature up its sleeve. The right-hand side plate can be raised by 17.7 inches, so that a curb can be scanned as a reference, even when working at large milling depths, and the machine can remove the pavement completely. Even just in front of Mont Blanc at an altitude of 3,280 ft., the W 220 operated at full capacity at top speed.Wirtgen

A glance at the traction drive shows that its power is harnessed intelligently, since Wirtgen has equipped the W 220 with the intelligent ISC traction drive. It delivers optimum traction with electronic traction control, adapts the advance rate of the machine to the current engine load and regulates the current speed of the external and internal crawler tracks on bends. On the SS 26, this was particularly advantageous on the many hairpin bends.

Thanks to the variable milling drum speed of the W 220, on which three speeds can be set from the operator's stand, the machine operator can also influence the milling texture, i.e. the surface finish and the peak-to-valley depth. For the project on the SS 26, the Italfrese team decided to combine the maximum milling drum speed with a high advance rate when milling off the surface course. Meanwhile, the HT 22 quick-change tool-holder system and type W 7 cutting tools ensured cost-efficiency.

Despite creating a machine with an immense power development, Wirtgen's development engineers were able to greatly reduce noise emissions. The Italfrese team immediately noticed this on the job at the foot of Mont Blanc. Thanks to this feature, the team has no concerns about working in residential areas, and indeed the milling contractor already has such a job lined up for its new powerhouse.

Crafco has industry-leading crack sealing tools to help you get the most from your efforts. Rout-Clean-Seal to double sealant service life!
March 1, 2021