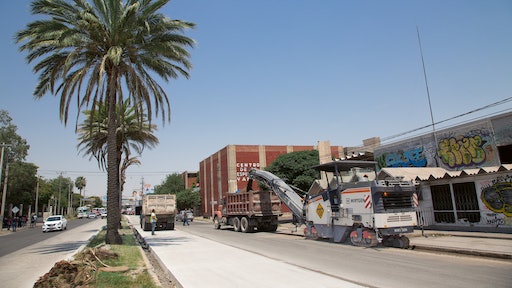 A Wirtgen W 150 CF compact milling machine was taksed with milling 15 miles of one of Mexico's most important economic and industrial centers.
Wirtgen

The project in one of Mexico's most important economic and industrial centers includes a new, exclusive hydraulic concrete BRT lane plus the rehabilitation of two adjacent asphalt lanes. The project will result in better, faster mobility with improved transportation security for city residents. 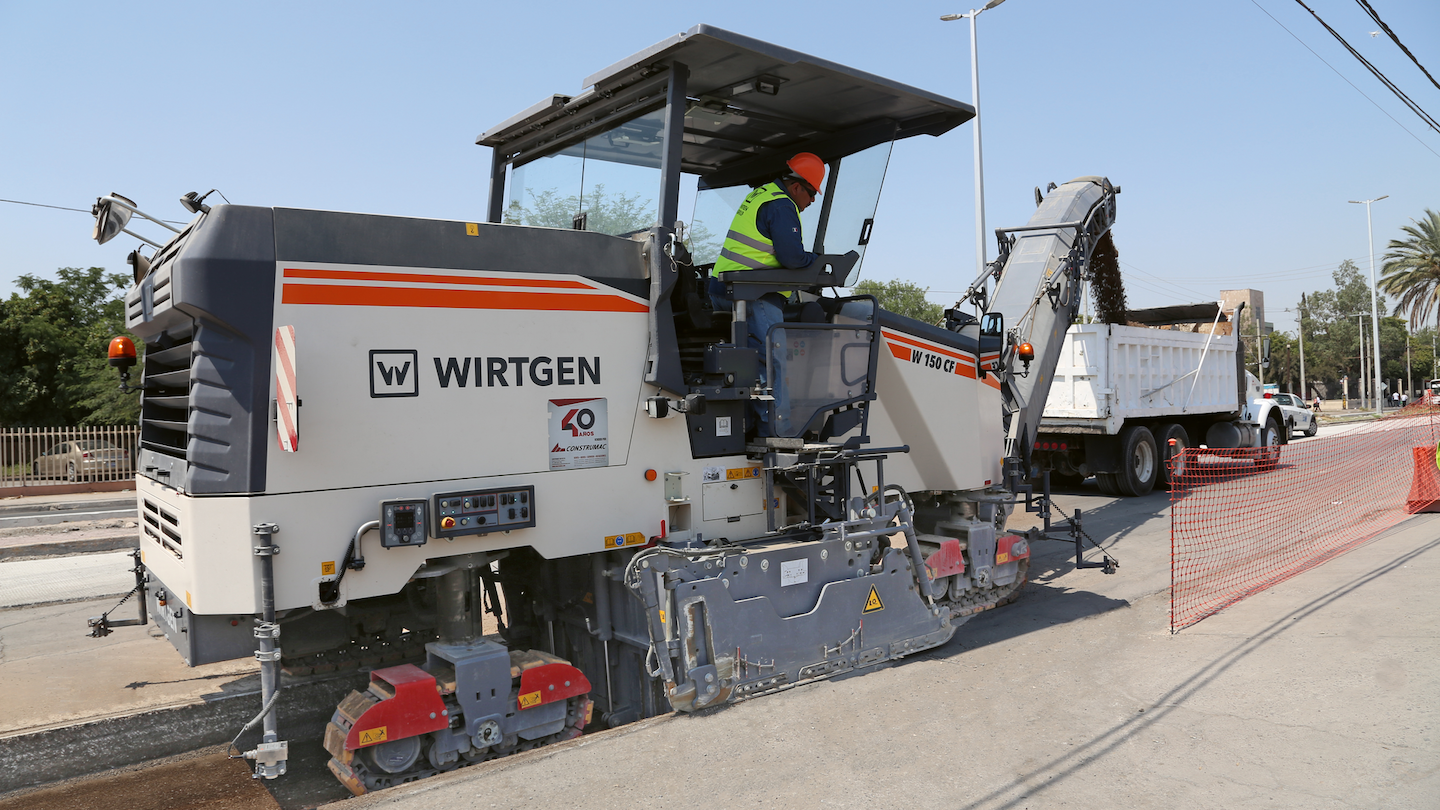 The Wirtgen W 150 CF was equipped with a 71-in.-wide milling drum to increase productivity.WirtgenHowever, before being able to build the new lanes, milling contractor TATSA (Triturados Asfalticos de Torreón S.A de C.V.) faced the challenge of removing the complete pavement at a maximum milling depth of 10 to 12 inches. With the W 150 CF it was possible to fulfill this task in one single pass; but depending on the stretch requirement, TATSA was also performing milling of the layers in two or three passes.

“These roads are old and have been paved over many times during several years without any milling work. In some parts the pavement is even above the sidewalk,” explained Eng. Gisela Gutiérrez, production coordinator at TATSA.

The entire project covers a length of 15 miles and includes the integration of 5.8 miles of central confined lanes in Torreón and 9.3 miles of highway between Torreón and Matamoros. The tender stipulated a single milling machine that could work at several locations in the city within the same day. Due to this requirement and the large-scale project in confined spaces the contractor chose Wirtgen’s 150 CF with a 71-inch milling drum assembly. With the extended drum, the most powerful cold milling machine in the compact class is now even more versatile and ideal for surface course rehabilitation on medium to large jobsites. Furthermore, W 150 CF’s optimized machine transport weight — despite its tremendous engine power — spoke for itself. 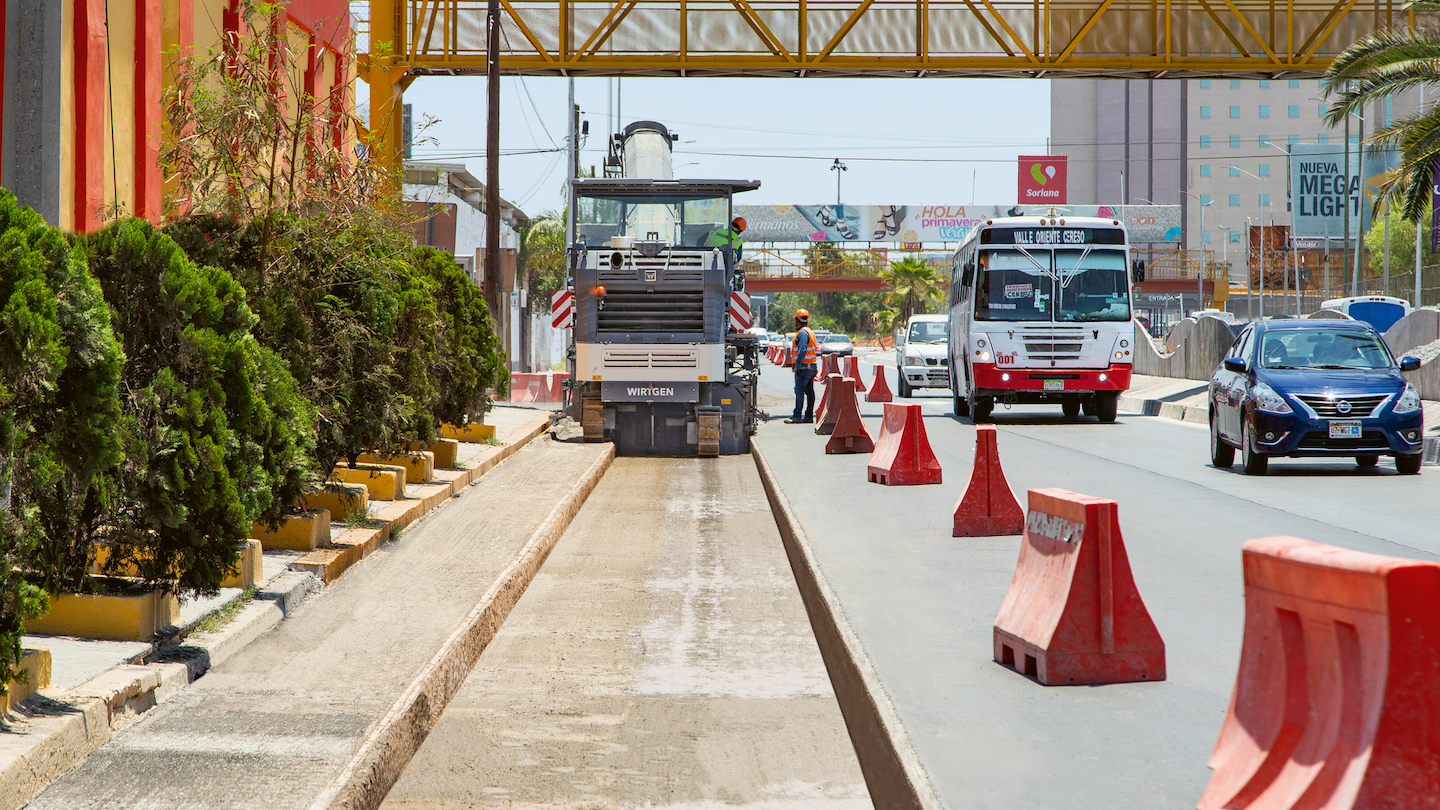 On the Mexico project, the milling machine had to complete anywhere from one to three passes due ot the uneven road layers.Wirtgen
“Before participating in this tender we talked to the application experts from the Wirtgen Group dealer Construmac. And soon we were sure the W 150 CF would be the best solution for this job. After its arrival, the machine immediately convinced us. In the meantime, we ordered a new unit for further projects in Mexico,” says Eng. Ruben Tinoco, owner of TATSA.

Today, urban jobsites are required to be much more dynamic and fast, causing minimal impact to the traffic, routines of residents, workers and people passing the area. So in Torreón minimizing the traffic interruptions were an essential goal. According to Tinoco, the plan is similar to what he could experience on jobsites in Europe. “I was in Finland for holidays. At 6 p.m. a paving train with Wirtgen Group machines arrived in front of my hotel in Helsinki. The next morning when I got up, all the equipment was gone and the road was perfectly paved. We want our jobs in Mexico to be done just as fast and efficient, with minimal impact on regular transit and in high quality.”

To achieve optimum milling results, the W 150 CF offers state-of the art features. These include one of Wirtgen‘s core technologies — levelling. When the surface course is removed, the LEVEL PRO leveling system continually compares the actual milling depth with the present target milling depth. LEVEL PRO can work with different sensors — cable, hydraulic cylinder, ultrasonic and slope sensors or laser and sonic ski sensors as well as multiplex systems — and can be extended as required. 3D levelling is also possible with installed interfaces that are compatible with 3D systems from common manufacturers. 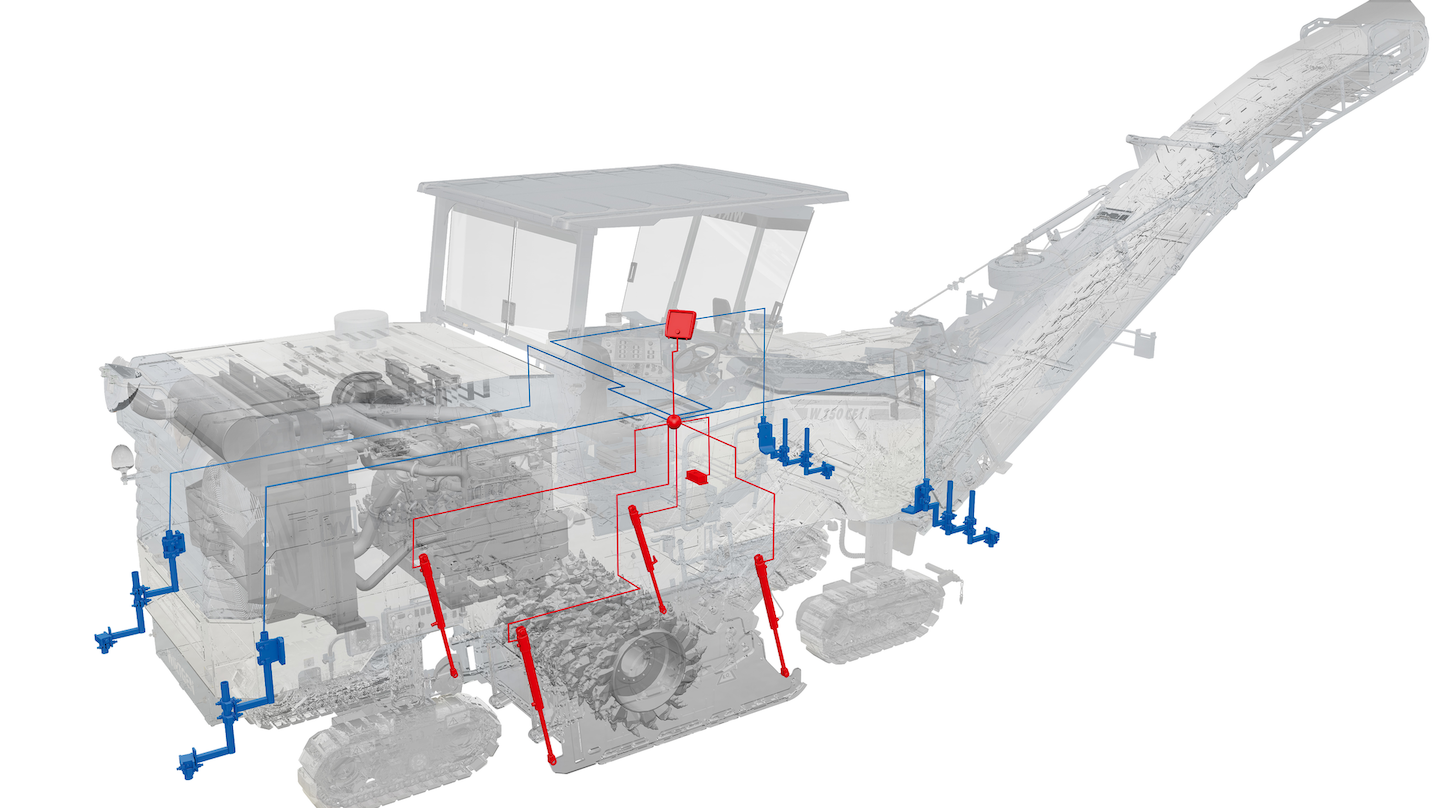 Wirtgen's Multiplex system with up to four ultrasonic sensors.WirtgenIn Torreón, TATSA used the multiplex system. In this system, three sensors on each side of the machine scan the height. The automatic leveling system factors all three measurements into its analysis so that the pre-set target milling depth is met exactly, while ensuring that any unevenness in the road surface is not copied. “The work with Wirtgen’s leveling system the Level Pro Plus and Multiplex systems is intuitive and comfortable, the milling results showed an evenly milled surface, true to line and level. This is a crucial factor when it comes to paving the new surface courses and avoiding costly correction measures in the form of asphalt leveling courses” says Eng. Liborio Frias Estrada, milling jobsite coordinator for the BRT project in Torreón. And Ruben Tinoco adds: “Cold milling has a key impact on the quality of road rehabilitation. That’s the reason why we rely on Wirtgen cold milling machines.”