High-performance milling tools from Wirtgen with a polycrystalline diamond (PCD) tip have significantly increased the productivity of a major road builder from New England. 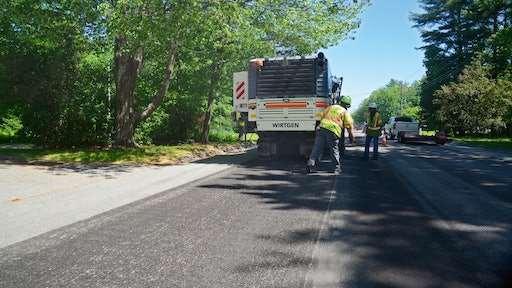 Wirtgen PCD cutting tools have a polycrystalline diamond tip and produce an extremely uniform milled surface, as was the case on State Route 202 in Gorham, Maine.

Pike Industries, which currently produces over three million tons of asphalt and processes over six million tons of aggregates, switched from picks with carbide tips to PCD milling tools in 2017. The result: Extremely even milled surfaces and considerable time saved during milling operations.

Due to their current tool geometry and materials, PCD milling tools are primarily suitable for surface layer rehabilitation and are predominantly used in fine milling applications. When fine milling road surfaces, milling drums with a tool spacing of 6 mm or 8 mm (LA6 or LA8) are used. In comparison, a standard milling drum for conventional milling has a tool spacing of 15 mm (LA15).

Fine milling drums with LA6 produce an even finer milling pattern than with LA8. Maine’s Department of Transportation accepts both tool spacings.

“We can therefore alternate between the milling drums,” explains Tom Quinn, head of cold milling and pavement removal at Pike Industries. "The smaller tool spacing also affects the advance rate of the machine, which means that we work with a lower speed at larger milling depths.”

Fine Milling in Demand for Paving Thin Layers Hot, among Other Applications

Fine milling removes ruts or unevenness in the road surface, improves the grip of roads that were cleared for traffic before the surface layer was paved and ensures a better bond between the layers when paving thin layers hot.

At Pike Industries, the fine milling process plays a major role. This is because it allows the company to produce a particularly even sub-base for the ultra-thin bonded surface layers that it paves on behalf of the state of Maine. The requirements of the Maine Department of Transportation (MaineDOT) stipulate fine milling and in some cases standard milling as preparation for paving thin layers hot. “We are currently working on a project in which we are milling a cross slope with fine milling drums and even removing the pavement at a depth of 15 cm,” says Quinn. “One reason for requiring the small tool spacings is the durability of the milling pattern when the road is driven on without a surface layer for a longer period of time. The pavement is expected to better withstand the effects of traffic as a result.”

Use of PCD Milling Tools Depends on Application

As part of another rehabilitation project, Pike Industries recently completed fine milling on State Route 202 in Gorham, approximately 20 km west of Portland, ME. The company used a Wirtgen W 220 cold milling machine equipped with a 2.50-meter-wide fine milling drum and PCD milling tools with LA8. According to Mark Williams, the site manager responsible for the project, the surface layer was removed 2 cm deep over a length of 3 km on two lanes and the adjacent shoulders.

In this context, switching from standard picks to PCD milling tools significantly increased Pike Industries’ productivity. Previously, the team had to completely replace the set of picks at the end of each workday – now the new milling tools can be used for an entire season or even longer.

“Picks with carbide tips wear out over the course of the day, which means that the milling pattern is not absolutely uniform and individual picks have to be replaced more frequently," Quinn says. "In contrast, PCD milling tools have a diamond tip and an optimized cutting geometry, guaranteeing consistent results. Even if a PCD tool has to be changed every now and then, it doesn’t have a negative effect on the pattern because the PCD tools used exhibit hardly any length wear. A uniform milling pattern is extremely important to us, and a single set of PCD milling tools is enough to guarantee this each and every day for a long period of time.”

The type of application is the main factor that determines which pick is the most cost-effective for the job (carbide or PCD). Independent of this, cold milling machine specialist Wirtgen has created a useful addition to its existing range of picks with PCD milling tools, thus tailoring its range of solutions in cutting technology to meet specific requirements.

Pike Industries is certain that the work it saves during day-to-day milling operations more than offsets the higher cost of PCD milling tools, as one set of tools can be used for an entire milling season, eliminating the need to replace picks.

Last year, the company milled a total area of approx. 1.7 million square meters with two milling drums. The PCD tools on the drum with tool spacing LA6 already removed over 400,000 square meters during the previous season, while the drum with tool spacing LA8 used on State Route 202 in Maine was fitted with new PCD tools at the beginning of the 2019 season.