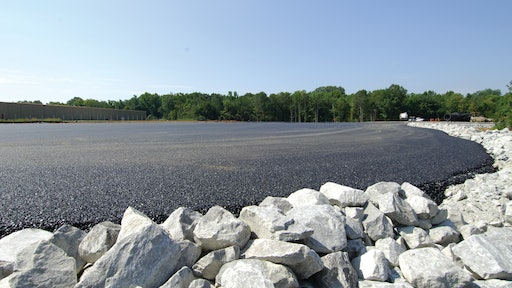 CHATTANOOGA, TN – Astec, Inc., an Astec Industries company, in conjunction with Talley Construction Co., paved a three-acre lot with pervious pavement. The paving was an opportunity to showcase an innovative technology for achieving pervious pavement. For this paving project, the lot was paved using warm-mix asphalt produced at Talley with the Astec Double Barrel Green System.

For the Astec project, the lot was paved with warm mix asphalt containing RAP. After the land was cleared and graded, a non-woven filter fabric was placed over the subgrade. A 14-inch layer of #3 stone was placed next, followed by a four-inch lift of #57 “choke” stone. The asphalt was applied in two four-inch lifts of AS binder containing 10% RAP. The layers were capped with 1.25 inches of Open Graded Friction Course (OGFC) surrounded by riprap. View a video of the paving project here.

Astec’s paved lot design can retain three inches of water, preventing runoff from being released into storm drain systems. Rainfall goes straight through the asphalt into the stone layer, and is then leached into the subgrade. Hold basins, retention ponds, or piping are not needed with pervious pavement. It allows the full space to be used and a larger area to be developed since additional space for storm water management systems is not required.