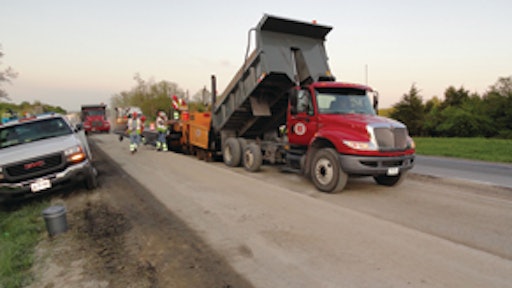 VDOT and its prime contractor Lanford Brothers Company, Inc. of Roanoke rebuilt a section of Interstate 81 in Augusta County by recycling existing road material back into the new pavement structure. This paving method reduced construction time by about two-thirds and saved millions of dollars, earning VDOT a national award by the asphalt recycling industry.

"Using these pavement recycling methods has the potential to revolutionize how we rehabilitate our aging roads, both in Virginia and nationally," said Governor McDonnell. "We expect to continue using these processes, where appropriate, to save money and materials as we rebuild older roads throughout the commonwealth. VDOT next plans to use cold in-place recycling to rebuild a section of U.S. 17 in Isle of Wight County in Hampton Roads during the 2012 paving season."

VDOT rehabilitated a 3.7-mile southbound section of I-81 near Staunton in 2011 using three processes known in the paving industry as:

This was the first time these three processes were used together on a single interstate project in the United States. The processes were performed both "in place" within the roadbed and adjacent to the highway, and they reused existing material from the underlying road structure. The driving surface received a new overlay of hot-mix asphalt.

"Savings on the I-81 in-place pavement recycling project go beyond time, money and materials," said VDOT Commissioner Greg Whirley. "It saved fuel because it reduced the need to transport as much new and old materials. It increased safety for drivers and road workers on the project, because it reduced work-zone congestion. This section of rebuilt pavement also will be stronger from bottom to top, extending its service life and reducing the need for such complex maintenance for many years."

The project used a novel traffic-management plan that detoured cars onto U.S. 11 away from the construction, while large trucks used one lane on I-81 while the other lane was under construction. VDOT alerted motorists to the construction several hundred miles from the project via on-road, Web and other communication tools.

The Asphalt Recycling & Reclaiming Association (ARRA) will present VDOT with the 2012 Recycling Award in the "Cold in-Place" category at the ARRA annual meeting in late February. The awards recognize the top asphalt road recycling projects in North America. Winners are selected based on the amount of recycled pavement material used, cost savings and project challenges.