Professional Pavement Products' president develops scale to determine if material should be applied that day. 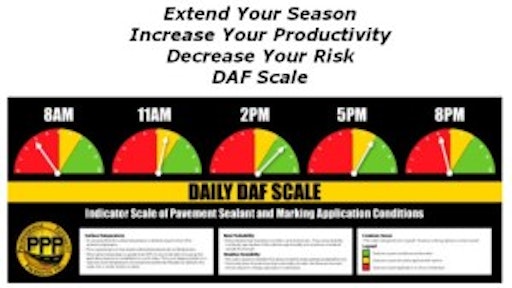 Greg Driskell, president of Professional Pavement Products, has known for a while that contractors needed a tool to help them decide if and when to schedule pavement maintenance work, and after two years of work and application PPP has developed the Driskell Application Factoring (DAF) scale.

"We wanted to come up with some type of objective numerical formula that would be consistent and accurate and that would indicate if this is a good day or a bad day to apply material," Driskell says. "The purpose is to provide some guidance that never existed before for sealer and paint applications."

He started by researching evaporation, eventually identifying four factors that play a primary role in the evaporation process: Humidity, temperature, sunlight and wind. Then he developed a formula that integrates the four aspects of the dry/cure process and results in a single-digit rating.

"We established a value and weight for each of the factors in a formula," Driskell says. "Wind, for example, compared to humidity, is much less significant, but it is a part of the drying process. We have determined that humidity is the Number One factor in drying and curing of sealer and paint. Temperature is Number Two, sunlight is Number Three, and wind speed is Number Four.

Driskell says rain is also tracked and projected but not within the DAF formulation. "The problem with rain is rain is predictable in general and unpredictable specifically," he says. "It can rain here and two blocks away it won't be raining. So because it's so unpredictable we created a separate rain advisory." The rain advisory is updated daily with a rating of 0-29% chance every day; 30-74% chance yields a rain advisory; and a chance of 75% and more is a severe rain advisory

"The specific weights we're giving the four evaporation factors in the formula is proprietary, and though we've made some minor corrective adjustments to the formula we have had a 96% accuracy in the past 12 months."

Weights and values for humidity, temperature, sunlight and wind are combined in the formula, and the result is a numeric rating (1-10) which translates into a color code: Red (0-4.99) sealcoating and painting is not recommended; yellow (5.0-6.99) sealer and paint should be applied with caution; and green (7.0-10.0) weather conditions are favorable for application. The scale is calculated for every three hours Monday through Saturday from 8:00 a.m. to 8:00 p.m. EST with updates posted on the website and in the each PPP facility.

"We wanted a 1-10 scale for each day but when I realized how dramatically the weather changed from one hour to the next we decided to calculate at a greater frequency," Driskell says. "Updating it during the day is important because there are days when it looks like you can't work but you can actually find 'pockets of opportunity' where you can put material down. It might be bad at 8:00 and 11:00 but the DAF might indicate conditions will be favorable at 2:00 so you call tell your crew to come in at noon and be ready to fire up at 2:00."

Driskell says the scale also can help as a historical reference. "Any time we have a problem I ask the contractor what day he put the material down, then I pull a DAF for that day" he says. "Well, if that day was a DAF of 2.2 I ask him 'Why would you do that?'

"This is important both for the contractor and for a sealer supplier because the first thing we want to find out is if it is a material failure or application failure. If it's a material failure that's a bigger problem and we're probably going to get more calls. If it's an application failure we can hopefully help the contractor avoid that problem in the future."

He says it can also help contractors better communicate with their customers. "If a customer insists on a contractor putting material down the contractor can use the DAF as a reference to evaluate the conditions and explain to the customer why this might not be the best day and the risk they're taking," Driskell says.

But ultimately the DAF scale is a planning tool.

"The best thing about this is the ability, especially in early spring or late in the season, to identify pockets of opportunity," Driskell says. "With this system it's not just a shot in the dark that it might be okay to put it down. " Ultimately we are trying to help the contractor to put more profit in their pocket!

Read more from Driskell about "Sealcoating, Striping & the Weather," from Pavement's August/September issue.