A service, not a product

It seems that the recent concerns about the future of the sealcoating industry need to be put in some perspective because the "sky is falling" hectoring coming from various contractors and even some sealer producers ignores the reality of the issue. The fact is, sealcoating is a service, not a product. If, as many people suggest, the product being put down will change, exactly how does that affect the service - or your sealcoating business?

The driving force behind these concerns is the feeling that sooner or later contractors won't be able to rely on coal tar sealer as their sealcoating product of choice. That remains to be seen, of course, but as of early March the signs are good that coal tar sealer will be around for a while. Sealer producers are expecting to be able to get the RT-12 they need to produce coal tar sealer this year (though at substantially higher prices), and the U.S. Geological Survey, which authored a study supporting the 2005 coal tar ban in Austin, TX, has admitted mistakes and has agreed to revise its report (see Hot Mix, page 6). The revision and its impact also remain to be seen, but the much-discussed demise of coal tar might not be as imminent as some insist.

But what if, at some point in the future, coal tar sealer becomes unavailable, whether because of shortages, environmental concerns, or simply because it becomes too expensive to use? What's a sealcoating contractor to do?

The answer is simple: Adapt. There are a number of sealer materials on the market, asphalt-based product being the most common, that can get the job done, and sealer producers are working to develop new products that might be used in the future. So while the product itself might change, the service contractors offer will remain substantially the same: They will clean and prepare pavement to accept a sealcoat that will both make the property look better and protect the asphalt, thereby extending the life of the pavement.

And sealcoaters shouldn't feel too put-upon if they have to make this change - they're not the first contractors to have to adapt to material restrictions in the market. Just a few years ago, for example, pavement marking contractors had to adjust their business and reduce their reliance on solvent-based paint. And even though that happened there aren't too many roads or parking lots out there that have gone unstriped. 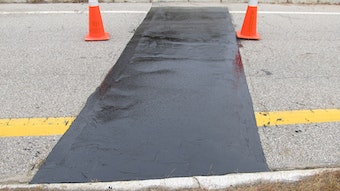