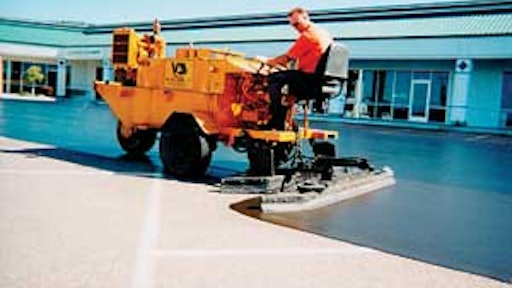 The Asphalt Sealcoat Manufacturers Association (ASMA) continues its efforts to develop the sealcoating industry through a variety of accomplishments in 2005 and plans for 2006.

President Cliff Clowers, VSS Emultech, a division of Valley Slurry Seal, said the 13-year-old ASMA is making a concerted effort to educate the industry, primarily the property manager end users of the material, of how and why to maintain asphalt pavements.

Three years ago ASMA completed its "Why Sealcoat" brochure. This year the association completed a troubleshooting brochure, titled "10 Common Problems Found on Sealcoating Jobs," directed at contractors and property managers. The brochure, which Clowers said will be available on the association's website (www.sealcoatmfg.org) November 1, contains example photos and explanations of a number of sealcoating-related concerns.

"We considered the common complaints we get as sealer producers and the problems contractors encounter," Clowers said. "Then we took photos of the problems, described the problem, explained what might have caused it to occur, and the best ways to treat or avoid it in the future."

One example is why sealer can turn white in certain areas after it dries. ASMA's troubleshooting guide offers three possible explanations for the whiteness: 1) high mineral content of the water used in the sealcoat, 2) Too much salt in the sealer's clay additive, 3) If a heavy fog rolls in shortly after the sealer is applied, the fog can bring out the mineral content of the sealer. The paper explains that in many cases the whiteness easily can be washed away.

"This is a basic and straightforward explanation of some of the things that can happen when sealcoating a parking lot," Clowers said. "It's a tool contractors can use and they can even refer their customer's to the site for an explanation if they need to."

Clowers said another accomplishment this year, one the organization has been working toward for more than six years, is acceptance by Caltrans of ASMA's sealcoating specification for some California pavements. Caltrans approved ASMA-specified sealcoating material for use on roadway asphalt shoulders and asphalt park-and-ride drives and parking areas.

"That's been a goal of ASMA for a number of years, we finally reached it this year," Clowers said.

Plans for 2006
Clowers said that in addition to developing educational brochures, the association is writing articles to be published in various property management trade magazines. The articles will cover the benefits of pavement maintenance in addition to explaining the value of sealcoating.

Workshops are planned for San Diego, Ontario, San Jose, and Sacramento. The first workshop is scheduled for April 2006.

Contractors join up
ASMA also is continuing its push to increase contractor membership. In the last year 10 contractors from four states have joined the organization, and ASMA hopes to more than double that number by the end of this year.

"As manufacturers we would like to know what contractors would like out of our sealcoating product. We want to know what they like, what they don't like, problems they're hearing about from property managers," he says. "We need their feedback on what we can do to improve our sealer. As manufacturers, they are our customers and we want to bring them into this setting."

Clowers said ASMA has also surveyed its members to determine what other actions member would like to take in the future.