When Perrysburg Sealcoating was sealcoating 3,500 driveways each season in the late 1990s, partners Eric Seaman and Troy Heckman decided it was time to reassess the company's direction. 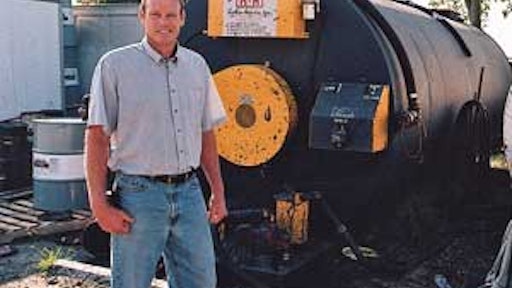 When Perrysburg Sealcoating was sealcoating 3,500 driveways each season in the late 1990s, partners Eric Seaman and Troy Heckman decided it was time to reassess the company's direction.

"Residential was our bread and butter and commercial was just extra, a bonus for us when we got it," says Seaman, who started the business out of the back of a station wagon in 1979. "But that's a lot of driveways every year, and it requires a lot of planning, scheduling, and employees."

So in 2000 they sold the residential business to concentrate on the commercial market.

"We got out of residential work for the same reason many paving contractors get out of doing driveways," Seaman says. "You get to a certain point and it becomes very complex. In commercial work we bid less per square foot but there are more square feet, so the margins are better."

Seaman and Heckman had been competitors, deciding in 1993 to join forces because Seaman needed equipment help and Heckman needed office assistance.

"We complement each other real well," Seaman says.

Initially business slowed following the sale, which was fine with the two partners.

"We had been working awfully hard and our goal when we sold the residential side was actually to slow down and have a life, but that hasn't happened yet," he says.

In fact, since the sale Perrysburg Sealcoating has doubled its volume on the commercial side. This year the company will sealcoat more than 300 parking lots, ranging from 12-unit apartment buildings to large shopping centers.

"By this year we were back up to the same number of employees we had but we're grossing more than we did then," Seaman says.

Today Perrysburg employs 15 people and generates 80% of sales from sealcoating, 15% from cracksealing, 5% from striping, and a minimal amount from small patch repairs.

"If you're going to be in this business you have to offer the basic pavement maintenance services, whether you do them yourself or sub them out to someone else," he says. "In a lot of ways it's easier to do them yourself because you have more control over when and how it gets done. It also generates more income from the same job, which is nice."

Perrysburg relies on menu proposals, giving customers a choice of a "standard" and "best" option, with 40% of customers opting for the slightly more expensive "best" job.

"I always hear people say ‘If you're not growing you're losing ground' but I don't believe that," Seaman says. "When you grow you increase your expenses, and unless you pick up a lot more work and improve productivity the gap between your expenses and your profit decreases, so what is the advantage of growing?"

He adds the company has considered getting into paving but has "successfully fought that urge. This is a good niche we've got here."

While Seaman is content with the state of the business, there is one thing he would like to change.

"I'd like to get out in the field, working on the jobs more. I really enjoy it," he says. "But I'm still able to get out there once a week or so, and even more often early and late in the season."