"Tanks" For The Help 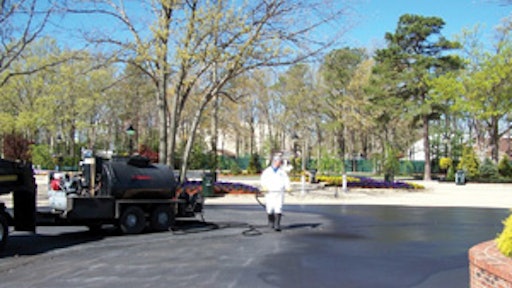 The job Advanced Pavement Technologies (APT) took on last year for Six Flags Great Adventure is a perfect example. Not only was the high-profile project large, encompassing more than 2.2 million square feet of parking lot, but it involved significant labor-intensive work that had to be done before the sealcoating and striping could occur—and it all had to be done in a tight time frame so the park could open on schedule.

As APT owner Ted Wilson knows, the only way to get this type of job completed under such tight deadlines is to plan and organize it so crews can be as productive as possible. And those are three attributes APT prides themselves on.

"After an overwhelming winter I decided to get an early start on the upcoming season," Wilson says. "I came up with a top ten list of potential customers and started making cold calls."

One of the return calls was from Six Flags, giving APT a chance to bid on a job that required repairing, sealcoating, re-designing the layout, and striping of its huge parking lot in Jackson, NJ.

"They had built a new roller coaster, the Kingda Ka (standing 456 feet tall, it goes from 0-128 mph in 3.5 seconds) and had used part of the old lot for the footprint of the coaster," Wilson says. "A number of parking spaces were lost, so the lot needed to be redesigned to regain those spaces before the season began."

But to redesign the layout, Six Flags had to remove all the parking stops, signage, concrete curbs, and concrete tramways, pave over some areas, fill cracks, mill parking stops, and then sealcoat it so a new layout could be marked and striped for 7,000 parking stalls.

"When we were bidding on the job, we were going up against some of the larger paving companies, and we know they do not normally do this kind of work themselves. They subcontract it out to sealcoating contractors," Wilson says. "We believed we had a good chance because this was our expertise. It was this expertise and our experience with sealcoating that got us the 2.2 million square-foot job."

Six Flags didn't pull the trigger on the job until April 20, which gave APT only a two-week window before the park opened in May. To complicate matters, Six Flags was shooting a television commercial to kick-off their season, and the park was open on a limited pre-season schedule.

"It was a challenge for us to coordinate with Six Flags' schedule and still be productive in such a short amount of time," says Andrew Muller, APT owner.

A sense of professionalism

Started in 1986, APT has grown into the successful, productive company they are today because of their employees, including four office administrators, one full-time sales rep, and four crews (21 field employees) at peek season. They generate 40% of sales from sealcoating, 20% from crack sealing, 20% from paving and asphalt repairs, 10% from sweeping, and the rest from snow removal and concrete repair.

Wilson said that with a job this big and with many elements, APT had to be organized to be as productive as possible. So APT set up a staging area in one corner of the lot.

"We wanted to make an impact from Day One, so we planned out the staging area and just kept everything moving," Wilson says. "It also made the job production go much more smoothly, which our crews enjoyed, leading us to completion upon deadline."

Once the staging area was set up, APT's crews coordinated the various types of work that needed to be done simultaneously to meet the schedule. APT had 12 workers on the site every day, so production became a matter of scheduling and coordination.

Some work that began on the first day continued throughout the job. A sweeper kept the pavement clean and dust down, workers cleaned areas by hand that the sweeper couldn't reach, and sign and parking stop removal kept crews busy and productive even through early rainy days. Sign removal posed a problem because the posts were buried 3 feet deep in the asphalt pavement. APT used a Bobcat equipped with a fork attachment to remove the signs and eventually all the parking bumpers as well.

A 3-person APT crew milled the concrete tramways beginning the second day on the job, and Wilson decided to pave the milled areas on his own. "All Six Flags wanted was for us to remove the concrete of the tramways, but if we did that the pavement would be slightly lower in spots," Wilson says. "In the end I felt if we repaved the area it would make for a better transition."

"We originally thought we'd just use a backhoe, removing big chunks of the curbing, which we'd then have to haul to the staging area and then pay to dispose of," Wilson says. "But we decided to mill it and that worked great. We put the milling machine right on top and it went right through the curbing. It was so much quicker and much less labor-intensive than using a backhoe."

For the next three days APT had to deal with rain and wet pavement, but they were still productive: A 5-person crew milled more than 50 speed bumps, a 4-person crew using the skid steer with forks removed 650 concrete bumpers and metal stakes, a 3-person crew removed signs and posts and filled the holes left in the pavement, and APT accepted a delivery of Sherwin Williams paint.

To make sure they could sealcoat with the park open and with a variety of other work that needed to be done, APT divided the lot into four 500,000-square-foot sections. Sealcoating proceeded in one area while other work continued throughout the rest of the lot.

Mike Tarvin, SealMaster sales manager for New Jersey and eastern Pennsylvania, says APT ordered all additives, sand, and spray tips delivered to the job before it started. APT also ordered eight tankers filled with pre-mixed coal tar sealer to be delivered to the staging area on an as-needed basis.

"A tanker was ordered and would arrive ahead of the emptying of the existing one, allowing APT to continue to spray during every hour available to them," Tarvin says. "Communication between the property manager, contractor, and sealer manufacturer was critical to allow such timing to occur. We had a plan and we executed it well."

Tarvin says SealMaster delivered the ready-to-use sealer with the water already metered to the customer's specifications in 4,800-gallon tankers, which are equipped with agitators. All APT's crew had to do was add the sand and additive.

"This dramatically improved the accuracy and the time it took to prepare a mix compared to traditional methods," Tarvin says.

Sealcoating began on Day Six, when SealMaster delivered its first pre-mix tank in the late morning and a second tank in the afternoon. Two 4-person crews sealcoated 500,000 square feet. Sealcoating was done over six days, and on one day APT went through four tankers of sealer. APT waited at least a day before applying the second sealer coat.

Rain slowed work again on the seventh day, halfway to the completion deadline, but because APT had planned for sign removal work to continue throughout the job that work could be done and the crews could stay productive. On Day 8, APT got a late start because the pavement was still wet, but once it dried a 3-person crew worked to edge and hand seal hard-to-reach areas. Then two 4-person crews applied two sealcoats to 350,000 square feet of pavement, and SealMaster delivered another tank to the site.

Over the next five days APT continued sealcoating and other work. On Day 12, the job got a little easier as the park was closed, and on Day 13, two 4-person APT crews finished sealcoating the final 250,000 square feet of pavement. The final day of work was, as scheduled, May 5.

"I assured the management at Six Flags that the job would be completed on time. After all the rain delays I was thrilled to deliver," Muller says. "It was a challenge. We put down a lot of sealer in a very short time."

Wilson says the job could not have been done on time without the cooperation of its SealMaster supplier.

"We were in constant communication with Tarvin, it was like he was on the job site with us. Over the course of the job APT put down 40,000 gallons of premix sealer and 18 pallets of sand and additives," Wilson says. "Having ready-to-use sealer was very important for getting the job done on time, for saving labor costs, and for making the work easier on our employees. It saved the time of going to the hydrant, putting the water in, and working to get the right mix every time. Having that premix tank there made for a faster, easier job with a more consistent result."

SealMaster's Tarvin adds that a job like this illustrates a key point.

"The price you pay for the sealer doesn't matter nearly as much as the efficiency in which you can put the product on the ground—that truly determines your profitability," Tarvin says. "APT understands this and that is part of the reason their business is doing so well."

Setting the Stage on Big Jobs

APT relies on staging areas to improve organization, safety, and to increase production on large and complex jobs, but it always plans the job before determining where to place the staging area. Andrew Muller, APT owner, told Six Flags it would be easier to meet the deadline if APT could have a staging area, and location of the area is most important.

"We determined where it would be most efficient to us, then we considered where the easiest access would be so the sealer tankers could most easily pull in and out," he says. "We put it where we felt it offered the easiest access for the way we broke up the job for each individual stage."

The staging area on the Six Flags Great Adventure job measured 200 feet x 70 feet and was in a corner just off a main entry road to the park. The area eventually contained a 20-yard dumpster, a portable toilet (which kept employees on site), SealMaster's 4,800-gallon premix tank, two Bobcats with a bucket and forks, an enclosed container for equipment security, a CMI 800-7 milling machine, a Mauldin 1750 C paver, a Tymco sweeper, sand, sealer additives, and spray tips. The area was planned so that each day when work was completed all equipment was backed into the staging area for easy out the next morning and packed in tightly to protect it during the night. "It was neat, organized, and well maintained," Muller says. "It saved us so much time. There weren't trucks all over the job, everything was contained in one area, and our employees were always on site. It made life simple."