For Sealcoating, 'Why You Buy' as Important as 'What You Buy' 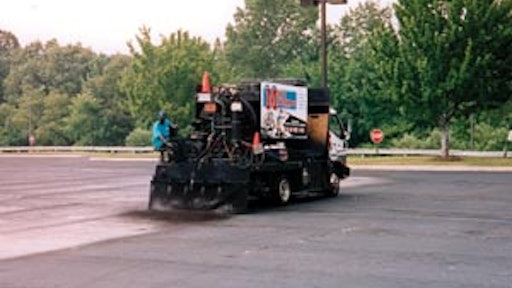 As with every piece of equipment, it’s essential contractors understand why they are buying equipment and what that particular piece of equipment is expected to do for them. Is it going to enable you to add a second crew? Take on large commercial jobs? Add a new service to your business?

“What’s your objective as a sealcoater?” asks John Capretz, vice president at Equipt Mfg. “Are you a college kid looking for some summer income or are you someone looking for a fulltime job or to develop a business? How much effort are you going to be putting in? If you’re doing huge jobs or if you’re marketing for commercial work you’ll want a higher-capacity machine. If you’re doing driveways you can get by with a small capacity piece of equipment.”

“The most important thing contractors need to consider – and many first-time buyers don’t think about this – is what you want to accomplish in sealcoating down the road,” Neal says. “Do you want to make a fast buck in a short time? Do you want to develop a long-term business? There is equipment out there for both of those goals but it’s not necessarily the same equipment.

Manufacturers almost universally agree that too many contractors buy too small a machine, especially for their first piece of sealcoating equipment. That happens because smaller tanks are less expensive and give a contractor an opportunity to dip his toe into the sealcoating market without making a big commitment. But size does offer flexibility, which can mean the difference between profitable and money-losing jobs and making it or breaking it in the sealcoating business.

“Most people wish they’d purchased the next size up machine,” says Steve Rapp, SealMaster equipment division manager. “After one season most people find they’ve outgrown that first machine they bought. Most buy the 300-gallon unit because its price is really good, but most also find they should have moved to the 550 gallon at least.”

Brent Loutzenhiser, Seal-Rite, says limiting the size of equipment you buy limits the size and amount of work you can do.

“It’s hard enough to get any business going and make it successful, and I hate to see people set themselves up to fail,” Loutzenhiser says. “If you limit the size of your equipment you limit the size and number of the jobs you can do. There are people who make a successful business out of sealcoating driveways, but what do you do if you’re sealcoating a driveway and the homeowner wants you to sealcoat the parking lot of his business? You might start out planning to only do residential driveways, but may find the demand for larger jobs changes your plans.

“It’s often hard to convince contractors, especially first-time buyers, that you just can’t have too much sealer and that’s something that contractors really need to realize,” he says. “Sealer doesn’t go bad, so having sealer sit for a month in your tank won’t hurt anything, it will only save you trips to the sealer provider.”

Manufacturers say contractors generally think they know how much money they need to spend on a sealcoating unit—and sometimes they are right. Loutzenhiser says, for example, that many contractors come in thinking they only want to spend around $5,000 for the equipment they need. But when a manufacturer starts crunching the numbers with the contractor the size of tank needed often changes.

“Once we explain the square footage they can expect to get from one gallon of sealer, they start to rethink what they need,” Loutzenhiser says. “Now this is for the beginning contractors, the ones who are just getting into the business or who have only done a little sealing here and there but are planning on making this a business. They often don’t understand; they don’t realize that sealer doesn’t go as far as they think it does.”

“Every first-time buyer is going to be happy if he thinks he can do 11 driveways a day,” Loutzenhiser says. “But what if you do land that big job? If you‘re going to be successful and make good money in this business you need to just go. You need to fill up, go to the job, go like crazy on the job, finish and move on to the next one.”

Capretz says tank size also is important because it affects how many times you need to return to your yard (or sealer producer) to pick up more sealer.

“Contractors should determine how large the tank needs to be partly by how far they are away from their sealer provider,” he says. “The farther away you are, the larger the tank you should consider.”

He adds that contractors should discuss having a sealer producer place a tank in their yard, so the sealer is easier to access. “But that depends primarily on the amount of sealer you’re using, so contractors need to talk with their suppliers.”

One of the recent concerns manufacturers are encountering has to do with higher gasoline prices, so contractors want a smaller tank because it will use less fuel to haul.

“But they’re not looking at the bigger picture,” Capretz says. “Sure, the more weight you are hauling the more fuel it will take. But there are other factors to consider: Your proximity to the sealer producer, the wear and tear on the trailer as it makes the extra trips to and from the producer, the wear and tear on the vehicle hauling the trailer, lost productivity on the job when you leave to get more material, labor costs to transport material, and even the loss of professionalism customers see when you keep coming and going on the jobsite.”

Loutzenhiser says contractors look more professional, especially on large commercial jobs, when they apply the first coat, go to lunch and then return to shoot the second coat. That way the job is done--instead of leaving the job three or four times just to fill up with sealer. He says it also is less disruptive to the client and less inconvenient for the client’s customers/tenants, if you can close the lot or areas of lot for shorter times because you can complete sealcoating more quickly.

“After talking with us a little while and discussing how they are thinking of approaching the sealcoating business, we might end up selling them a unit that is twice the size of what they had in mind in the beginning. And although from a business perspective, selling them a small unit first and then selling them a larger unit when they outgrow that one would mean the possibility of two sales instead of just the one, it’s not the way we look at it,” Loutzenhiser says. “We want to treat our customers how we’d want to be treated if we were in their shoes and most of the time that means a bigger tank so they don’t start out by hampering their growth potential.”

How to Plan for a High-profile Sealcoating Job

Your Equipment & Your Employees