TLG Paving works hard to make jobs easier for its customers — and its crews. 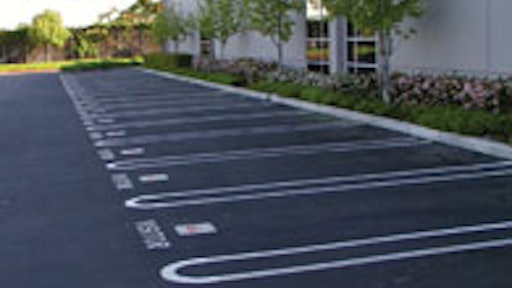 In an age governed by the customer inconveniences of computer-generated sales calls, answering machines, and multi-level telephone menu programs, TLG Paving Co. has made its mark by recognizing that the customer is king — and treating him that way.

Whether it's explaining the job process, changing a sealcoating schedule, or simply keeping property managers and their tenants informed about the job, TLG has the customer's needs in mind.

"Some companies have lost sight of relationships," says Tom Gilchriese, president of TLG Paving Co., Santa Ana, CA. "They're only into production and they don't care about inconveniencing the customer. We try to be very accommodating."

And laying the ground work for TLG's accommodation are the contractor's efforts to prepare the customers — both property owners and managers and their tenants and residents — for the sealcoating job that is going to take place. Gilchriese says preparation is a big part of TLG's process — and a big part of its sealcoating success.

Gilchriese had been working for another contractor when he decided to start his own company in July 1999.

"I had some clients built up but I couldn't get some of the work that I thought I could get, for whatever reason," he says. "So we struggled the first couple of years."

He says he spent most of his time at the beginning "pounding the pavement," driving through parking lots, finding out who owns or manages them, and calling on the phone. "Once I made that contact I started working to find out what other clients they had or properties they managed."

He credits his wife and TLG vice president, Franchesca, with encouraging him to stay the course.

"It got to one point where I didn't know if we could make it," he says. "I had a couple of offers to buy out the company and we considered the offers very seriously. But my wife is a stronger person than I am and she convinced me to turn down the offers."

And the company, which employed eight people at that time, turned around in one month. Today TLG works with a database of more than 1,000 past customers, 100 of whom are regular clients, each with multiple properties and all of whom have been repeat customers. The contractor employs 12 people and Gilchriese doesn't want to get bigger than about 20 people "so we can keep control of what's going on."

"I don't see any need to get any bigger than that," he says. "We'd just like to keep it small and keep it personal and hopefully have fun along the way."

He says the company is a true pavement maintenance specialist, focusing on pavement repair, concrete repair, sealcoating, and striping.

Rather than buy a standard sealcoating machine, TLG built 12-ft. squeegees that attach to the back of its John Deere and New Holland tractors.

He says the company has enough equipment, and the crew is cross-trained on all types of work the company does, that he can split the crew to handle as many as four simultaneous jobs if necessary.

Gilchriese credits Salomon Sandoval, a foreman with the company since 1999, as a key figure of the crew's effectiveness. Most other members have been with the crew about three years.

"I believe the crew is very happy where they're at," Gilchriese says. "In this market there's a lot of bouncing around from company to company and these guys have stayed with me. I try to pay them no matter what, even if we get six weeks of rain like we did last year. It's hurting them, too, so I do what I can to keep them happy and keep them from going in the unemployment line or on welfare."

"We're very hands on," Gilchriese says. "It's a lot of extra work but I'll tell you what: It saves a lot of headaches on the days the guys are there trying to get their work done. When my guys show up on the job we don't want calls because there are eight cars left on the lot. That's where you can make or break your job on — how much time are you wasting."

One of Gilchriese's first steps when working with a prospective customer is asking for an 8 ½ in. x 11 in. site diagram of the property, which he then scans onto a TLG diagram sheet that contains TLG Paving's contact information and phone numbers.

"I spend a lot of time on the diagram, but when we get our proposal and that diagram to a customer or in front of a homeowners' association board, and they see our proposal with a nice clear diagram, that goes a long way toward winning the bid," he says.

That diagram will become a crucial element of TLG Paving's efforts to keep residents, tenants, and the property manager informed about what's going to happen on the job. But before anything can happen, TLG asks a lot of questions

"We try to gather as much information we can about what happens at the property we're going to sealcoat, whether it's an office complex, a retail complex, or a property managed by a homeowners' association," Gilchriese says. "The more information we have about what their days are like, the better job of planning we can do to make the work easiest on all of us. So we ask them 'What is your lightest day?' 'What days will work best for office workers?' 'What days will work best for retail stores?' We try to work with them all."

Once TLG has asked its questions it can schedule the work. Then TLG Paving asks the property manager to send out two pieces of paper. The first is a notice of sealcoating, informing tenants what work will be done and which days it will be done. The second piece of paper is the diagram that shows what areas will be sealcoated on which days, where the traffic will flow, and where the parking will be.

Gilchriese says he works closely with management companies to help them keep their clients in the loop about what's going to happen on their property.

To make things even clearer to tenants TLG also diagrams the stages of the work and includes that diagram with the letter.

Also leave them a contact name and phone number to call and ask questions.

After letters and diagrams have been sent, comments received, and changes in the plan made, Gilchriese visits each property a few days in advance of the job, marking areas of the pavement with paint to remind the crews about the job.

"While I'm out there if I see something that might be able to be done better or should be done differently than we originally planned, we make a change. We alter the diagram and get the revised drawing in the hands of the tenants."

At each property Gilchriese walks through the building, meeting and talking with the tenants, reassuring them, and answering any questions they might have.

"Homeowners' associations are a different ballgame entirely. They have a different mentality altogether and you need to take that into account," he says.

For homeowners' associations TLG uses the sealcoating notice, the diagram, and also marks the pavement well in advance of the work so the residents can see in advance what is going to take place.

"Most contractors go out there and let the residents know the day's sealcoating is going to happen, but that's just our first step," he says. "We do that, we go out and mark the pavement, and then the days before work starts we go door to door to notify residents with door hanger notices with basic information that their area will be closed for sealcoating."

Business is going so well, with marketing manager Kim Bangs bringing in new prospects through direct-mail reminders and other marketing efforts, that Gilchriese needed to bring in Tom Hughes to help sell and work with customers. Like Gilchriese, Hughes is "wearing all hats" including estimating and overseeing his jobs from beginning to end.

"He's going to handle the job the same way I do it, 'the old-fashioned way,'" Gilchriese says. "That's how we do business."