Construction Spending is On the Rise 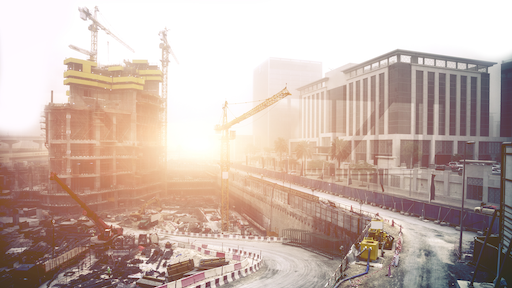 The residential sector has been a high point in the recent months. September is the third consecutive month of gains for the residential segment, which rose 0.6% in the month. According to the National Association of Home Builders (NAHB), the seasonally adjusted annual rate for total private residential construction spending in September was the highest level since December 2018. 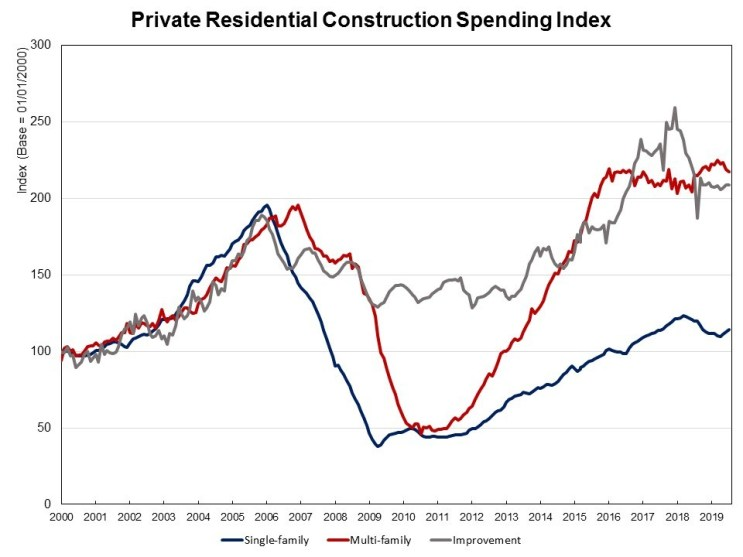 Within the segment, Wells Fargo shows single-family rose 1.3% in each of the past three months. Single-family construction spending was at a $274.6 billion annual pace for the month, according to NAHB — the highest monthly annual rate since December 2018.

The nonresidential sector is not as hot. Total nonresidential spending increased 0.5% in September after a 1.1% drop in August, according to Wells Fargo. Associated Builders and Contractors (ABC) adds that nonresidential construction spending is down 0.9% on a year-ago basis and is 2.4% lower than the cyclical peak in April 2019.

A 1.5% gain in spending in the public construction segment was the reason for the monthly increase. The public spending segment is up 6.6% for the year, according to ABC. Private nonresidential construction spending fell 0.3% for the month, putting that segment down 5.9% over the last three months and 5.7% lower compared to 2018. 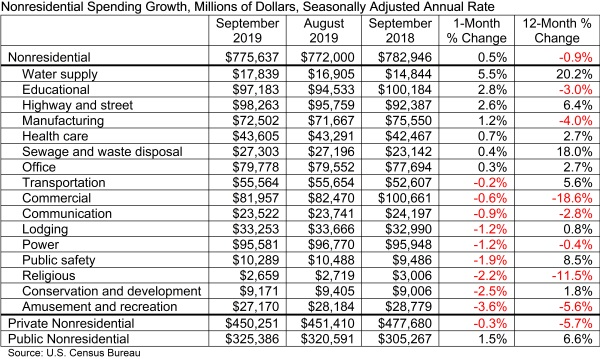 “Construction spending contracted in a number of private segments, including in the commercial and lodging categories,” said ABC Chief Economist Anirban Basu. "While it would be easy to attribute this to a slowing economy and/or growing concerns regarding the saturation of available space in certain private segments, there are also large-scale economic transformations playing a role. Commercial construction spending is down nearly 19%, as traditional retailers continue to contend with the growing presence and capabilities of e-commerce giants, while those in the lodging segment — which dipped in September and is essentially flat year-over-year — are increasingly competing with online platforms such as Airbnb.

“Meanwhile, public construction remains one of the strongest elements of the U.S. economy,” said Basu. “Spending in the water supply category surged nearly 6% in September and is up 20% on a year-over-year basis. Overall, public nonresidential construction is up nearly 7% over the past 12 months as state and local government finances enjoy their best health in more than a decade. While there were some declines on a monthly basis in certain public segments in September, year-over-year spending is up more than 6% in the highway/street category, by nearly 6% in the transportation segment and by nearly 9% in the public safety category.

“Leading indicators, including the Architecture Billings Index, continue to point toward sluggish growth or worse in private construction,” said Basu. “Public construction spending, by contrast, should remain a source of economic expansion during the months ahead, but the looming insolvency of the Highway Trust Fund must be addressed soon for momentum to persist. In September, nine of 16 nonresidential construction segments experienced a decline in spending, and there has been a negative trend in place since April. Accordingly, viewed from a high-level perspective, the outlook for nonresidential construction spending is becoming increasingly uncertain, though available data regarding backlog suggest that the industry will enter 2020 with residual momentum.”

Business Owners Have to Focus Priorities to Have a Successful Company

If you put long-term priorities first and focus on what will give you the biggest return on energy, you’ll have lots of time for the important things in your business and personal life.
George Hedley
June 17, 2020

Even if you’ve only seen a slight decline in your business income due to COVID-19, it pays to check into these relief programs and the traditional loans available to small businesses.
Caterpillar - Cat
June 8, 2020

Filing proper liens is critical to keep the process from backfiring on the contractor and having a lien declared fraudulent.
June 10, 2020

There’s a “new normal” for hiring and onboarding these days. Try out these five tips if you're looking to hire.
Caterpillar - Cat
June 8, 2020

Most companies stop growing when the business owner reaches their maximum level of what they can do themselves, micromanage, supervise, and control.
George Hedley
June 3, 2020

How Equipment Financing Can Help Contractors Cope with the COVID Economy

Things to consider as you manage liquidity, cash flow and equipment needs in the face of pandemic business conditions.
June 1, 2020

Many workers have been displaced due to the COVID-19 pandemic. Use these tips to find and recruit this pool of potential workers to the construction industry.
Jessica Lombardo
May 29, 2020

At a time where every competitive advantage matters, it’s time to leverage your compliance strategy for growth.
James Gilmer
May 28, 2020

Construction software becomes a competitive advantage when it delivers actionable project insights.
May 25, 2020

When companies don’t get the results they want, it's not the competition, economy, customers or people; it’s usually the leader who isn't willing to change or accept accountability and responsibility.
George Hedley
May 20, 2020
Follow Us