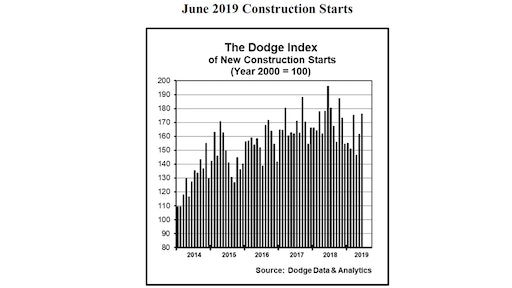 New construction starts in June advanced 9% from the previous month to a seasonally adjusted annual rate of $832.7 billion, according to Dodge Data & Analytics. The increase followed the 10% gain reported for May, as total construction starts continued to strengthen following April’s subdued performance. By major sector, much of the lift in June came from a 16% jump for nonresidential building, which reflected the start of the $1.1 billion expansion to Terminal 5 at Chicago’s O’Hare International Airport, as well as sharp gains for office buildings, public buildings (detention facilities and courthouses), healthcare facilities, and warehouses.

June’s data raised the Dodge Index to 176 (2000=100), compared to an upwardly revised 161 for May. June’s reading was the highest so far for the Dodge Index during 2019, topping the 175 for March, and coming in slightly above the full year 2018 average for the Dodge Index at 172. On a quarterly basis (which helps to lessen the volatility present in the monthly data), the Dodge Index edged up 1% during the second quarter of 2019, helped by the improved activity in May and June after a weak April. This followed a 7% decline during this year’s first quarter compared to the final three months of 2018. “On balance, the pace of construction starts has been sluggish so far in 2019, as activity has been generally lower than the healthy amount reported during the first half of 2018,” stated Robert A. Murray, chief economist for Dodge Data & Analytics. “The improved activity during May and June suggests that the gap relative to last year should narrow in coming months.”

“Several features of the first half of 2019 stand out, as shown by the construction start statistics,” Murray continued. “For nonresidential building, the commercial and institutional building segments have stayed close to their 2018 amounts, but manufacturing plant construction has not seen the same number of very large projects that were reported last year.

For nonbuilding construction, electric utility starts have witnessed renewed growth after several years of decline; but public works construction was generally lackluster in early 2019, and the dollar amount of new pipeline projects is down considerably from last year. 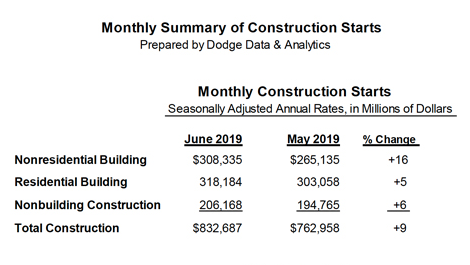 Nonresidential building in June was $308.3 billion (annual rate), up 16% which followed an 8% increase in May. The institutional building categories as a group soared 37% in June, helped in particular by a 348% jump for new transportation terminal starts.

The public buildings category also had a strong June, advancing 242% as the result of these large projects:

Healthcare facilities climbed 22% in June, featuring the start of six hospital projects valued each at $100 million or more that were led by the $305 million Altru Hospital in Grand Forks, ND, and the $245 million University of North Carolina Hospital Surgical Tower in Chapel Hill, NC.

Educational facilities, the largest institutional building category, edged up 1% in June as it registered growth for the third straight month. There were four high school buildings valued each at $100 million or more that reached groundbreaking in June, located in Richmond, TX, ($158 million), Wilkes-Barre, PA, ($137 million), Ames, IA, ($137 million), and Falls Church, VA, ($108 million). The top five states in terms of the dollar amount of educational facility projects that reached the construction start stage during the first half of 2019 were Texas, California, New York, Massachusetts and Ohio.

Decreased activity in June was reported for amusement-related projects, down 7%, and religious buildings, down 43%.

The commercial side of nonresidential building increased 12% in June. The office building category advanced 31%, boosted by the start of these large data centers:

Through the first six months of 2019, the top 10 metropolitan areas in terms of the dollar amount of new office construction starts were:

The other commercial building categories experienced decreased activity in June — stores, down 1%; commercial garages, down 9%; and hotels, down 11%. Despite the decline, the hotel category did include the $86 million hotel portion of the Gateway to Minneapolis mixed-use building.

Nonbuilding construction in June was $206.2 billion (annual rate), up 6% which followed a 32% surge in May. The electric utility/gas plant category continued to see strong activity, advancing 14%. Providing the lift in June was the $1.1 billion Energy Vision 2020 upgrades to wind power facilities in the states of Washington, Wyoming and Oregon. Also contributing were two substantial projects in Wyoming — a $1.0 billion expansion to a wind power complex and a $500 million transmission line project.

The public works categories as a group grew 2% in June after a 1% decline in May. The river/harbor development category provided the lift, rising 164% in June that reflected the start of a $524 million storage reservoir in Labelle, FL, a $243 million dredging project in Massena, NY, and a $100 million waterfront development project in Staten Island, NY.

Through the first half of 2019, the top 10 metropolitan areas ranked by the dollar amount of multifamily starts were: 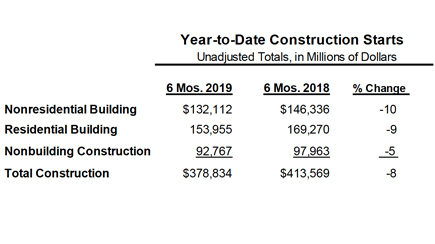 By major region, total construction starts during the first six months of 2019 showed this behavior: