When OPTCO, a Gilbert, AZ-based industrial coating company, was awarded the painting contract for the new $450 million Arizona Cardinals football stadium in Glendale, one of its first tasks was to assess its equipment needs. 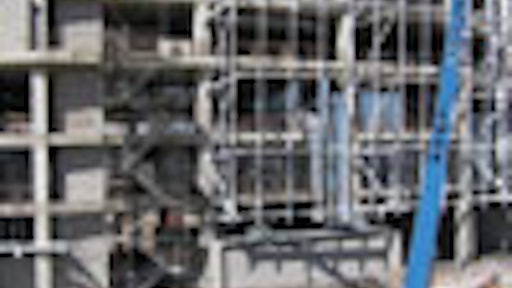 When OPTCO, a Gilbert, AZ-based industrial coating company, was awarded the painting contract for the new $450 million Arizona Cardinals football stadium in Glendale, one of its first tasks was to assess its equipment needs. A primary element of the contract was responsibility for touching up most of the stadium's steel structure once it had been placed into position.

Although OPTCO owned several pieces of access equipment, the size and complexity of this project would require the addition of not only additional machines, but more productive equipment. OPTCO turned to the newly opened United Rentals Aerial Equipment branch in Tempe, AZ, for recommendations.

"They were asking about a product that could keep up with the massive yet fast-paced project they were getting ready to attack,"says Rob Ryan, United branch manager.

After listening to their requirements and analyzing the application, Ryan recognized a unique opportunity. "We had been asked by Genie to evaluate one of the first all-new Z-135/70 articulating boom lifts,"he explains. Ryan believed this would be an ideal place to put it to a true test, while at the same time providing what he felt would be a suitable tool for the customer. Allen Kaufman, OPTCO president, was receptive to the idea and the machine was delivered in early February.

OPTCO's contract calls for the company to inspect and touch up the finish on more than 9,000 tons of pre-painted steel that help make up this enormous structure. While a lot of the work is done on the ground, once the steel is hoisted and either bolted or welded into place, the final work must be completed.

The Genie Z-135/70 was selected by OPTCO for several reasons. First, its 141 ft. of working height is essential for a project of this nature. Equally important is its relatively compact size and the maneuverability afforded by the standard four-wheel steering system. But what really got Kaufman's attention was the fact that the boom could articulate. Its up-and-over clearance of 75 ft. 6 in. and its ability to deliver 70 ft. of horizontal reach was essential to allow access over the lower deck seating from the floor of the interior of the stadium.

Although Frank Guana, OPTCO's field superintendent, likes the flexibility the articulating boom gives his crew, that wasn't as important as the unit's quick and easy operation. OPTCO's contract covers virtually the entire steel framework of the stadium.

"We don't spend much time in any one location,"Guana notes. "Once the lower boom is deployed, the articulating upper section moves up and down quicker than our standard straight telescoping machines."With so much surface area to cover, the quick movement of the upper boom substantially improved OPTCO's productivity.

What has turned out to be the most appreciated aspect of the new lift has been its jib extension. The telescoping extension goes from a retracted 12 ft. to 20 ft. and offers +70° and -40° range of motion. There were many places where OPTCO needed to extend into the labyrinth of cross bracing found throughout the structure. "We would not have been able to access many horizontal locations without the extra-long jib,"says Guana.

Since this particular unit was one of the very first Z-135/70s put into service, the true potential of its features were a bit of an unknown commodity. "What this machine could do was a bit of a learning process for all of us,"says Ryan. "We didn't realize what an advantage the jib would have on this or any job of this nature."

Overall, OPTCO has been pleased with the features and capabilities of the new lift. United Rentals also has been satisfied with the service performance and acceptance of the concept of this machine. Ryan is now looking forward to the delivery of an additional pair.