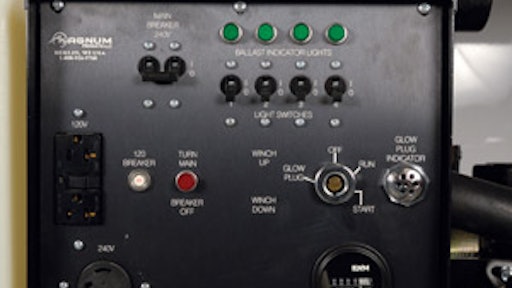 Portable lighting options - both standard light towers and balloon lights - are steady, quiet sentinels on jobsites. When changes occur to these machines, it's not splashy or drastic, but quiet and deliberate.

"The light tower market has been in gradual but constant change for more than 30 years," says John Gibbons, manager of technical sales and market development at Terex. "From the original air-cooled machines sitting on an open base, to the sturdy enclosed liquid-cooled efficient machines we have today, much has changed, but much as stayed the same."

On Ingersoll Rand LightSource units, the Auto Start ? Stop feature has a built-in photocell that allows the unit to turn on automatically at dusk and either run for a specific amount of time (up to 10 hours) or until dawn.

With the flip of a switch on the control panel, the light tower can be changed from manual to auto mode. When it's placed in auto mode, the operator need only set the dial to the desired run time or turn the timer to the "timer off" position for the system to automatically power off at dawn.

Allmand's LSC100 Light Sequence Commander also uses a preset photocell sensor which allows the light tower to be automatically turned on and off as needed without human interaction.

The LSC100 also features an eight-event digital timer that enables the operator to preset different activation and deactivation times each day - allowing up to eight separate sequences daily.

Magnum Products' Auto Light is a seven-day programmable controller option that allows customers to turn the light towers on and off automatically. There are several benefits to auto start options, says Dean Mathison, product manager with Magnum Products.

"The Terex AL4000 currently offers a sound package, consisting of sound dampening foam placed strategically inside the housing," says Gibbons. "We're also looking at other options that would further reduce sound emissions from the machine such as critical grade mufflers and cooling air discharge baffles."

Of course at parties, festivals and events, most people want the light towers to be seen and not heard. Balloon lights are very quiet - or as quiet as the source powering it - and therefore ideal for special events. If noise is an issue with your customers, a balloon light would be their best option.

Packages & parts compatibility
Some of the other news coming from portable lighting manufacturers involves customized packages and universal parts upgrades.

Allmand Bros. has recently introduced specialized configurations to its Maxi-Lite and Night-Lite PRO Series light towers based on geographic needs.

The Maxi-Lite towers come in a standard package, as well as an Arctic Special Package for harsh, cold-weather environments and a CSA-Approved Package that meets Canadian requirements. Additionally, the smaller Maxi-Lite models, which are powered by 6- and 8-kilowatt generators, come with a Hydraulic Package, which is constructed for easier set-up and preparation for travel.

The Night-Lite PRO Series also features an Arctic Special Package and CSA-Approved Package, as well as an International Package tailored to meet the needs of countries using 220-volt power.

"These features allow the customer to stock fewer service parts, as both machines now carry the same parts," says Gibbons.

The crystal ball
When manufacturers looked into their crystal balls, they saw several options that could be incorporated into portable lighting options.

Marc James, product manager with Ingersoll Rand, said the light bulb itself might evolve. "There are many different ways to illuminate an area," he says. "Some manufacturers are looking at using LEDs (light-emitting diodes), such as car manufacturers use in taillights. LEDs are inexpensive and they last quite a while."

James also said that news from the recent BAUMA show held in Europe included light towers with cable-over-hydraulic actuated towers; these towers collapse in on themselves and are stored in the units. "While these light towers might be a bit more expensive, you'll be able to fit more units on a truck for transportation."

Some units will become more compact. Balloon lights, for example, will have decreased package sizes for increased mobility, says James, and standard light towers will also start to become smaller.

Some standard light towers are already becoming more compact. Magnum offers its Compact 3000 series that helps save space in storage and transport. "Transport costs - including fuel and labor - are reduced every time these light towers are moved to and from the jobsite," says Mathison.

Any changes to portable lighting will only refine these quiet sentinels. The bottom line, however, is that customers want reliable lighting at the lowest possible cost. Manufacturers will continue to strive to get you the brightest, quietest portable lighting option they can.

Streamlight's FlipMate is a USB rechargeable light with a blade that rotates 270 degrees on its body to provide area lighting as well as color matching
Streamlight Inc.
November 5, 2019
Follow Us