The Fundamentals of Generator Selection

A look at the basics of selecting mobile generators for your jobsites. 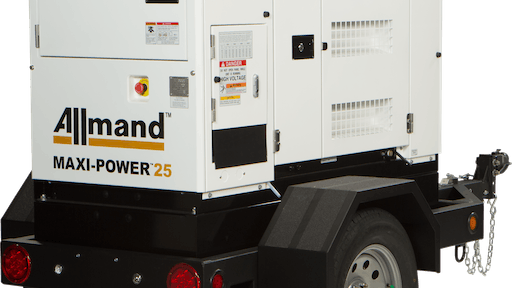 Many generators offer the ability to switch between 50- and 60-Hz frequencies to accommodate different equipment.

There are a number of things to consider when selecting a mobile generator for your application. The jobsite, required capacity and generator features are among those items to consider in order to make an informed and profitable decision.

“In most cases, rental centers and equipment dealers can provide excellent guidance for customers looking to rent or buy a generator,” states Brian Northway, product manager, Allmand Bros. Inc. “Their suggestions, however, are only as useful as the information they’re provided. Only with a comprehensive understanding of the equipment a customer will be powering, along with any other job-specific factors, can they determine the ideal generator.”

Clayton Costello, operations manager at CK Power, agrees, noting, “Because jobsite applications vary so widely, mobile generator selection should be taken on a case-by-case basis. A small commercial remodel, for example, will require a much different mobile generator than a big bridge refurbishment or road construction job.”

While some jobs may require a unit capable of handling significant surge loads, others may call for the ability to switch frequency or run on an external fuel supply. “The most important factor to consider — and the most common mistake that individuals make — is selecting a unit that doesn’t match the power required for the job,” Northway cautions.

“That’s why it’s so important to work closely with your supplier in order to select the mobile generator that best fits your jobsite’s particular requirements,” Costello emphasizes. “If needed, some suppliers can even customize a genset with the necessary load requirements, safety precautions and innovative features you need to be successful day in and day out.”

Read next: What to Consider When Selecting a Generator

Size It to demand

When it comes to generators, it’s important to pay careful attention to sizing. “An under-sized generator, or one too small to handle the load, will place strain on the unit and cause a shutdown or, at worst, damage to the unit,” says Todd Howe, global generator products manager, Doosan Portable Power. “A generator that is too large for the load will eventually result in ‘wet stacking,’ or a carbon buildup in the engine, causing a power loss.”

According to Costello, a generator should have a rated and maximum output just high enough to support the application. Rated output is the number of watts the machine can produce for an indefinite period of time, while maximum output is typically viewed as the highest number of watts the generator can produce for brief periods.

“Take those numbers and add a 10% buffer as a safety precaution,” Costello advises. “If you choose a genset that doesn’t meet the demands of its application, the generator will fail to power your site adequately and wear out faster.”

However, it’s important not to build too large a buffer, since having more power than needed can be detrimental. “Ideally, a generator should have enough power to run everything at a site, but not so much that it will be running significantly below its rated load capacity,” Northway states. Diesel generators operated below 50% to 60% capacity are at risk of wet stacking.

To minimize this risk, some contractors may opt to run two smaller generators in parallel. Paralleling is when two or more generators are electrically coupled together using special equipment to form a larger capacity power source. If the two generators are the same size, it effectively doubles the power output.

“The basic premise behind paralleling is to take two generators and connect them together in such a way that they combine their output to make a theoretically bigger generator,” says Howe.

“This provides workers the option of shutting down one unit to adjust for demand,” Northway points out. “Although this may increase initial costs, it can deliver savings for some jobs by reducing downtime and improving application flexibility.”

Although a generator’s primary purpose is to deliver electricity, multiple output settings can increase its versatility.

“Units equipped with a frequency switch are beneficial if the generator will be used with both 50- and 60-Hz equipment,” notes Northway. “Many generators can switch between both frequencies to accommodate different equipment. Similarly, generators that offer multiple voltage settings, as well as the ability to switch between single- and three-phase electric power, provide owners and operators with improved versatility.”

An automatic voltage regulator (AVR) can further expand the generator’s flexibility. “A surge of power is required as equipment starts and then the power need tapers off as equipment runs normally. An AVR helps ensure the output voltage remains consistent, even under varying loads as you start and turn off your equipment throughout the workday,” Costello indicates.

Read next: Don't Let Generator Sizing Trip You Up

Runtime refers to the amount of time a generator can run before refueling. “In general, you’ll want to choose a generator that meets your jobsite’s load requirements at 100% throughout a typical workday,” Costello advises. “Anything beyond that is extra. Anything less, and you’re losing precious work time while your crew stands around [waiting] for the generator to be refueled.”

For situations where more time between fuel fills is needed, generators are available equipped with large fuel tanks and offering runtimes exceeding 24 hours. There are also generators capable of switching from the onboard fuel source to an external one.

“Drawing from an external source can drastically extend runtime compared to units that are limited to an onboard fuel supply,” Northway comments. “While this option is available from many manufacturers, some have made it standard, while others do not offer it at all.”

Another option worth consideration is an automatic fuel priming system. “This system allows the operator to simply turn the key back to start and the system will prime itself,” Northway points out. “Although no one plans to run a generator completely out of fuel, it does happen, and having a self-priming generator can cut downtime significantly.”

Here are some other common factors to consider when choosing a generator for your jobsites.

Diesel-powered generators continue to be the most prevalent due to the common fuel source with most equipment on site. However, models such as Doosan’s gasoline-powered C-185 and VP900 electric portable generator have made inroads in certain applications.

Other power options tend to find use where fuel is more application specific. “Using natural gas is commonplace in oil and gas sectors where fuel comes directly from the wellhead,” Todd Howe, Doosan Portable Power, notes. “In North Dakota, West Texas and Oklahoma, 60% to 70% of generator fleets are powered by natural gas.”

“Some commercial and residential areas have strict noise control regulations,  and you need to make sure you abide by them,” CK Power’s Clayton Costello emphasizes. “Industry standard for the sound level on a generator is about 70 dBA heard at 23 ft. Most generators meet this standard, but depending on the location or application of your jobsite, you may require a generator with more sound attenuation.”

Site contamination can also be a concern in some areas. “Certain locations require extra precautions be taken to prevent the risk of site contamination,” Brian Northway, Allmand Bros., points out. “When working at a site with strict guidelines, look for a unit with an internal leakage reservoir. Some provide full fluid containment with a reservoir capable of holding more than 100% of the system’s total volume, ensuring there is no risk of environmental damage.”

Consider a generator with curbside maintenance access. “This increases accessibility for maintenance by plumbing all fluids and service points to the curbside,” Northway explains.

To further improve accessibility, many models come with large side access doors. “These large doors, combined with the benefits of having all service points located on one side, help simplify maintenance,” Northway states, “and reduce the amount of time spent working on the unit.”

How To Get the Right-Sized Generator for the Job