Materials prices up 4.4% compared to February 2011 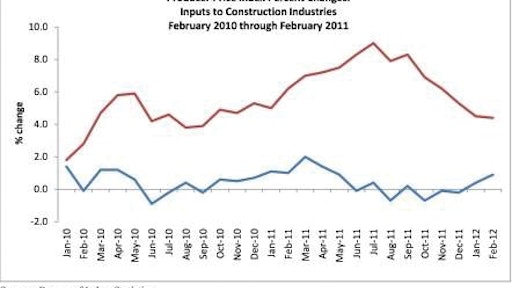 For the second consecutive month, prices for construction materials and supplies increased, rising 0.9 percent in February after an increase of 0.4 percent in January, according to the U.S. Labor Department’s March 15 producer price index report. Materials prices are up 4.4 percent compared to February 2011. Similarly, nonresidential construction materials prices rose by 0.8 percent last month and are up 4.6 percent from the same time last year.

Leading the increase were non-ferrous wire products, up 3.4 percent last month but down 3.1 percent on a year-over-year basis. Steel mill prices rose 0.6 percent from the previous month and are up 4 percent from February 2011. Prices for fabricated structural materials increased 0.9 percent last month and are 3.6 percent higher than one year ago. Concrete product prices remained unchanged in February but are up 1.5 percent compared to a year ago.

In contrast, February plumbing fixtures and fittings prices declined 0.1 percent on a seasonally adjusted basis but are up 2.9 percent from February 2011. Softwood lumber prices fell by 0.1 percent last month and are down 1.3 percent on a year-over-year basis. Prices of prepared asphalt, tar roofing, and siding slid 0.5 percent in February and are down 1.9 percent from one year ago. Iron and steel prices declined 1.2 percent last month but have risen 1.9 percent during the past year.

“Various leading indicators of construction – including Associated Builders and Contractors’ (ABC) Construction Backlog Indicator – point to rising demand for construction services in the year ahead,” said ABC Chief Economist Anirban Basu. “While there are many reasons to remain cautious, recent performance in the broader economy, along with rebounding financial markets, suggests that a genuine, potentially sustained construction recovery is approaching.

“However, this also implies growing demand for construction materials, and with that comes an increase in materials prices,” Basu said. “The pace of construction price increases nearly doubled from January to February of this year. All things being equal, the ongoing expansion of the U.S. economy, which has been associated with average monthly employment growth of 244,000 during the past three months, should translate into steadily rising input prices during the course of 2012.

“While the U.S. economy has been firming, there continue to be signs of economic softening elsewhere in the world, including China, India and much of Europe,” said Basu. “This economic slowdown would limit the growth in global demand for construction materials, which opens up the possibility that U.S. construction could recover without corresponding increases in certain input prices.