Hilti is teaming up with Mike Holmes on his new series Holmes Makes it Right by providing Mike and his crew with a full line of Hilti cordless tools as well as drills, breakers, measuring tools and consumables. 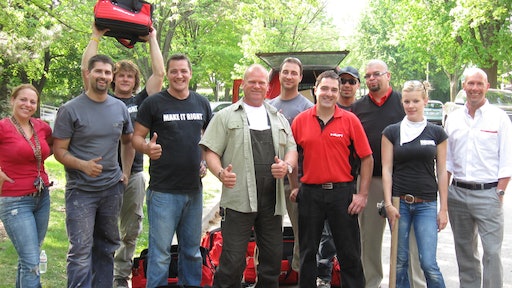 Hilti teams up with Mike Holmes on his new show "Holmes Makes It Right."

Hilti is teaming up with Mike Holmes on his new series "Holmes Makes it Right" by providing Mike and his crew with a full line of  Hilti cordless tools as well as drills, breakers, measuring tools and consumables.

Mike will use Hilti tools in his new series, Holmes Makes it Right, to help desperate homeowners whose homes, lives and finances have been compromised by disastrous events and renovations.

“We’re doing huge jobs on the new show. And for what I need, my crew needs, and what these jobs need, there’s nothing better. Hilti performs, bottom line,” said Mike Holmes.  “We put these tools to the test every day. They’re tough tools for tough jobs. And they’re helping us make it right.”

Teaming up with the Holmes Makes it Right series is a good fit since Hilti’s purpose is to help build a better future.

“We are excited to provide products for the Holmes Makes it Right series and to help show that doing a job right starts with selecting the right tools,” stated Ted Przybylowicz, senior vice president of marketing for Hilti. “We are committed to providing high-performing, innovative products to the market to help professionals like Mike Holmes to build a better future.”

Currently in production, the new "Holmes Makes it Right" series is scheduled to air on HGTV in Canada October 16, 2012 and in the United States in early 2013.