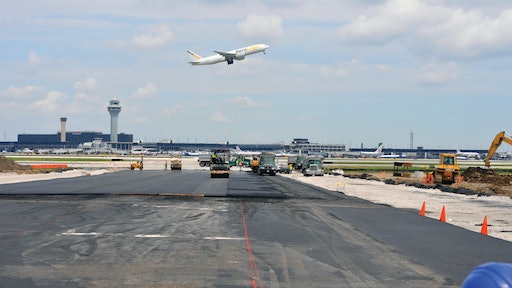 O'Hare International is among the first in the United States to produce and place warm mix asphalt as part of the construction of new taxiways.

The world’s second busiest airport in terms of flight operations behind Atlanta’s Hartsfield-Jackson International is undergoing some major changes. The O’Hare Modernization Program (OMP), as the expansion and upgrading project is named, is one of the country’s largest current construction projects.

The OMP is reconfiguring O’Hare’s airfield into a modern parallel runway configuration from the original system of intersecting runways. This new configuration will reduce flight delays and increase capacity.

Upon completion of the OMP there will be a total of eight runways; six will be east-west parallel and two will be crosswind. Two relocated runways will have been constructed to accommodate new larger aircraft. Several miles of new taxiways will have been built as well. Also included in the plan is the eventual construction of a new passenger terminal on the west side of the airport.

The CDA has continually emphasized the importance of incorporating and utilizing sustainability practices in the design and construction of all projects related to the OMP. Roughly two years ago members of the OMP team evaluated the use of more environmentally friendly warm mix asphalt (WMA) as opposed to hot mix asphalt (HMA).

The CDA had extensive consultations with the Civil Engineering Department of the University of Illinois and with representatives from the Federal Aviation Administration (FAA). Based on research, the CDA concluded that WMA was an appropriate substitute for HMA on O’Hare’s taxiway projects.

O’Hare International as a result of the above research and testing is the first airport in the Great Lakes Region and among the first in the United States to produce and place WMA as part of the construction of new taxiways for the OMP.

During 2011 OMP contractors placed more than 7,100 tons of WMA to construct the asphalt-treated permeable base (ATPB), binder course and shoulders for Taxiway ZS. This work was done from late July to early August 2011, and the overall Taxiway ZS project was completed in the fall of 2011.

This new taxiway is a component of the OMP Completion Phase 2A and was constructed as a Group V category taxiway. Group V status can accommodate Group VI aircraft (NLAs) with certain operating restrictions. Taxiway ZS is located on O’Hare’s south airfield near the Southwest Cargo area and runs in a north/south orientation between future Runways 10C-28C and 10R-28L.

This work is being conducted at the northeastern corner of the airfield and is part of future Runway 9C-27C. The WMA work is slated to be completed in the spring of 2012. The Runway 9C-27C Northeast project consists of new taxiways and the realignment of existing taxiways.

Anatomy of the runway

The anatomy of the runway and taxiway components and materials will be discussed starting with the deepest layer which is the lime stabilized subgrade. This establishes a solid and consistent foundation for the asphalt and concrete components of both the runway and taxiway cross sections. The top 12 inches of the soil subgrade is stabilized in the OMP with a mix of lime and water.

The next component is the asphalt treated permeable base (ATPB) which is open graded asphaltic cement concrete. This section is typically placed in one or two lifts to build the 6-inch section. In addition this layer is constructed or compacted from 100 degrees F to 150 degrees F to maintain the voids between the aggregate. The ATPB allows for drainage of water through the pavement section. The Performance Grade (PG) for this layer is 58-22.

The next layer is the asphalt binder which consists of an asphaltic blended aggregate mix based on Illinois Department of Transportation (IDOT) specifications. The PG for this material was 64-22. An approved chemical additive is included in the mix which allows for the lower temperatures and creates WMA. This 6-inch section is also typically placed in two lifts similar to the ATPB. This asphalt binder has fewer air voids than the ATPB. Asphaltic cement is used in this layer in lieu of Portland cement concrete (PCC) to reduce the cost of the pavement section.

Lastly the top surface layer is reinforced PCC. The thickness of the reinforced PCC layer varies from 16 to 21 inches depending on the runway.

Airfield pavement designs are similar to the typical Interstate highway design. However, airfield cross sections are typically thicker due to the weight of aircraft and the stress of aircraft touchdowns upon landing on runways.

The Chicago Department of Aviation has been and continues to be very committed to incorporating green best practices into all aspects of O’Hare International and to Chicago’s smaller but well utilized second airport, Midway International. This includes airport design, construction, operations, terminal maintenance and day-to-day management.

The CDA developed a Sustainable Airport Manual (SAM) to establish guidelines, policy and procedure for airport operations including construction and is applying this to the OMP. The exploration and research that went into the decision of using WMA follows the sustainability practices. The incorporation of WMA as a component in O’Hare’s taxiway design and construction meets the triple bottom line.

WMA is proven to be a paving method that has less of an environmental impact than HMA for example. WMA also has the potential to save time and expenses. In relation to a project with the scope of the OMP, the savings of time, labor and materials cost, as well as the lesser environmental impact, are significant.

The benefits of using WMA are related to sustainable development and improved working conditions. Included in this are environmental benefits from reduced fuel consumption, and reduced asphalt plant emissions. There are physical benefits that relate to the paving process such as increased workability for transporting and placing asphalt and potentially extending the length of the paving season. Using this innovative and more eco-friendly paving technology is one of the many industry leading sustainability initiatives that continue to be incorporated at Chicago’s airports.