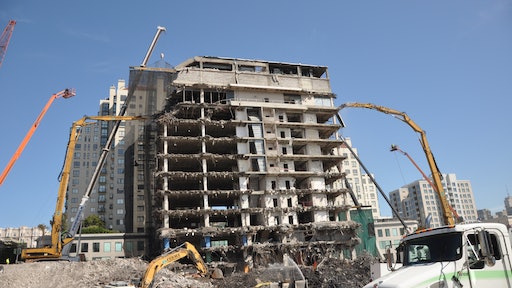 At the end of December, FERMA began the hard demolition of the office and hotel buildings, starting with the 12-story structure. The team carefully removed the top four floors of the structure with the CAT 385CL high reach. For the demolition of the remaining eight floors, the team used the Volvo EC460CL HR. On the street level, FERMA used a CAT 336EL with a Labounty MDP 50 second member processing to demolish the columns and concrete.

NDA member FERMA Corp. began demolishing the 53-year-old The Jack Tar Hotel in San Francisco in November 2013 to make way for California Pacific Medical Center’s (CPMC) new medical facility that would reach 226 feet tall and contain 274 beds. Just like the Jack Tar itself, however, the project was anything but normal. With its fleet of equipment and emphasis on safety behind it, FERMA was up to the challenge.

FERMA was the chosen contractor after CPMC conducted a competitive bid, with the stipulation that at least 30% of the team be local San Francisco residents. Furthermore, FERMA’s vast array of high reach and specialty equipment was necessary in the completion of this complex project.

Once deemed “the world’s most modern hotel,” Jack Tar provided guests with such innovations as a closed-circuit television, a swimming pool, air conditioning and an ice rink on the roof. Occupying a full city block at the intersection of Geary Boulevard and Van Ness Avenue and boasting 403 rooms, a 450-car garage and 680,000 square feet, this modernist San Francisco hotel underwent drastic changes since its opening in 1960. In 1982, the hotel took on the name Cathedral Hill Hotel. Shortly thereafter, a fire killed two people and injured 37 more. Though the hotel was rebuilt, it ultimately closed its doors to the public in 2009. It served as a home for various squatters until Occupy San Francisco — an activist collaboration based on the Occupy Wall Street movement that began in New York City in 2011 — took it over.

Before the demolition could begin, the team planned the project in sections to efficiently and safely remove the massive 15-story, 165-foot-tall hotel; five-story, 450-car parking garage; and 12-story adjacent office building within the CPMC’s eight-month time frame. The team also had to account for the buildings’ public-facing location in the heart of downtown San Francisco. To complete the project, FERMA used a dozen machines in tandem, all of which qualified in a tier 3 or higher rating in engine compliance.

Due to the jobsite’s highly public location, the team’s first concern revolved around safety. They encircled the site with fencing and closed the adjacent sidewalks, in addition to adding a public transportation and car traffic lane control for the perimeter of the project. The team also had to prep the building for the demolition, taping the windows to ensure they didn’t shatter into the live the traffic below. The elevator and air duct shafts aided in containment, as they became funnels for removing debris from the building without contaminating the air surrounding the jobsite with dust. Finally, the FERMA team implemented ramps for staging areas to conduct proper equipment leveling and a pattered haul road for load out.

From the ground up

The actual demolition began in November 2013, with the FERMA team first demolishing four stories, two of which were below grade, to give access to the site. Due to the solid construction design of the hotel and surrounding structures, the team got to work with the soft demolition of Jack Tar interiors, while simultaneously demolishing the five-story, reinforced concrete parking lot.

The soft demolition necessitated the use of a 90-ton Link Belt crane with OSHA-approved skidder basket, which elevated the CAT 246D skid steers to all the floors. Crews began demolishing and loading each floor of the 12-story structure with the help of two CAT 246D skid steers per floor, working six floors at a time. Each skidder then pushed all the debris through an abandoned elevator shaft, and a ground skidder pulled the material through the elevator shaft and loaded it into trucks removing the debris from the jobsite.

The team also used CAT 301.8 excavators on the roof with a skid steer to remove foam and tar paper, later to be disposed of or recycled. Once crews completed the soft demolition of the 12-story building, all 12 skidders moved over to begin the whole process again on the 15-story hotel.

Meanwhile, the crews brought out the “big guns” to demolish the five-story parking structure. Using a Volvo EC340CL HR equipped with a Labounty MDP50 Cruncher third member, three CAT 336 excavators, two with hammers and one with bucket, FERMA was able to crush tons of concrete for use on site, in addition to shipping rebar off to the recycle yard to make room for more equipment planned for arrival at the start of January.

At the end of December, FERMA began the hard demolition of the office and hotel buildings, starting with the 12-story structure. With the added complication of the four busy roads surrounding the jobsite, FERMA protected the vehicles by installing 140-foot by 50-foot fabric and heavy mesh curtains held in place by a 90-ton altering crane.

Then, starting at the corner of Van Ness Avenue and Post Street, the FERMA team carefully removed the top four floors of the structure with the CAT 385CL high reach. For the demolition of the remaining eight floors, the team used the Volvo EC460CL HR. On the street level, FERMA used a CAT 336EL with a Labounty MDP 50 second member processing to demolish the columns and concrete.

In early February, the demolition of the 12-story building was complete, and the team turned its attention to the last standing structure: the 15-story Jack Tar itself. With a constant flow of sightseeing tour buses and pedestrians frequenting the area each day, FERMA added a second curtain measuring 50 feet by 175 feet, which the team installed on Post Street at Van Ness Avenue. The team secured the curtain with a 75-ton Link Belt truck crane at Post Street, and a 90-ton altering Link Belt at Franklin Street held an additional 40-foot by 50-foot curtain. A 150-ton lattice boom crane held a third curtain at Post Street.

In addition to allowing for the pedestrian problem, FERMA also dealt with strong winds, which halted demolition as containment measures moved too close to street areas. In order to stabilize the curtains, FERMA laced them with cables and attached skid steers as anchors. Added wind load required the use of larger cranes, and the 35-ton Link Belt was swapped out for a 350-ton Link Belt.

With the wind complications under control, the team continued demolition with a CAT 385CL working off a 40-foot elevated pad at Post and Franklin streets and a CAT 5110BL high reach machine working off street grade at Van Ness Avenue.

The CAT 385 and CAT 5110 demolished the eighth floor, and the Volvo EC460CL with high-reach configuration alongside the CAT 365CL tore down the remaining floors. By the end of May, the FERMA crew finalized demolition of the hotel and began to process rebar and load out concrete to clear the site for the foundation pad demolition.

To finish in June, FERMA began demolition of the 200 foundation pads, measured at 16 feet by 16 feet square, 5 feet thick and 10 feet below sand grade. FERMA used a CAT 385CL to excavate and pull them out of the ground, and a CAT 336EL excavator with hammer attachment crushed the concrete.

The team removed the steel rebar using the CAT 336EL, while a CAT 365CL with a Labounty MDP 30 attachment loaded out the processed material. In total, 65 trucks removed debris, each carrying three loads away from the site daily.

Ultimately, the FERMA team chalked this complex project into the “success” column, not least for its ability to recycle 99.1% of all recyclable concrete, rebar and steel beams — all while keeping to CPMC’s designated timeframe. Moreover, FERMA completed the project with zero safety incidents, which it considers a critical benchmark of success in any project. Despite the traffic, public and environmental factors that threatened the safety of the jobsite, FERMA expresses that safety was always the most important aspect of completing this job.