The canopy contains approximately 5,000 solar panels, producing 1.3 MW of electricity and is part of the plant target to reduce energy intensity by 25% over a 10-year period. 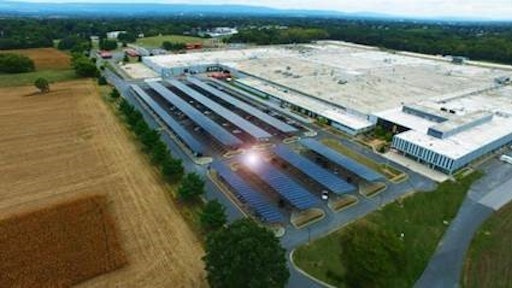 Volvo Group North America’s Hagerstown powertrain manufacturing facility today dedicated a new parking lot solar canopy structure that generates clean, renewable electricity, while keeping vehicles protected from the weather. The Volvo Group partnered with ConEdison Solutions and Entropy Solar Integrators on the design and installation of the solar canopy, which is among the largest on the U.S. east coast.

“The solar canopy is a great example of the importance the Volvo Group places on environmental care, which has been one of our core values for many years,” said Pierre Jenny, Volvo Group vice president of powertrain production. “Working together with ConEdison Solutions and Entropy, we’re now able to convert energy from the sun into clean electricity to help power some of our operations.”

Covering the plant’s entire north parking lot, the solar canopy contains approximately 5,000 solar panels and produces 1.3 megawatts of electricity. Electricity generated by the canopy is delivered directly to the facility, helping to offset the plant’s electrical demand. Because solar panels emit zero emissions, energy produced by the solar canopy is equivalent to eliminating the annual greenhouse gas emissions of 236 average passenger vehicles, according to Entropy.

Entropy began installation and construction of the solar canopy in the fall of 2014. The solar canopy was completed during the summer of 2015. The Volvo Group entered into a 20-year contract with ConEdison Solutions to purchase electricity generated by the solar canopy.

“We are proud to work with Volvo Group and to help the company move a step forward in their vision to become a world leader in sustainable transportation through this significant project,” said Michael Gibson, vice president, energy services for ConEdison Solutions. “Volvo is setting an excellent example for  manufacturers nationwide regarding the benefits of renewable energy installations like this solar canopy in Hagerstown, which will help reduce greenhouse gas emissions and the use of fossil fuels.”

Solar canopies are one of the fastest-growing segments of the solar market today. They take advantage of large expanses of parking lot space, typically available at commercial or industrial facilities, to produce electricity from solar photovoltaic panels. The panels are mounted to carport-like frames situated over parking spaces to provide parked vehicles shelter from the elements.

“Entropy is proud to have delivered this great project for Volvo Group North America’s Hagerstown facility. By converting their parking area to a solar energy system, they are not only generating clean energy, they are also keeping the hot sun off of their employees cars and protecting them from snow and ice in the winter months,” said Erik Lensch, managing director at Entropy. “As one of the largest solar parking canopies on the east coast, this complex project will be providing benefits to Volvo for decades to come.”

The Volvo Group’s Hagerstown facility has been active in improving its energy efficiency. In late 2014, the site was named a Superior Energy Performance® Platinum-Certified Partner, the highest level in the U.S. Department of Energy (DOE) program. The facility also participates in the DOE’s Better Buildings, Better Plants program, which has a target to reduce energy intensity by 25% over a 10-year period.