How to choose equipment trailers for the long haul 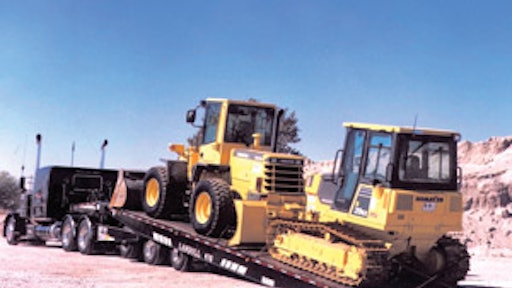 With increased steel prices, equipment trailers have become a major investment. "Today, you have to pay more attention to the details because you are investing $75,000, $100,000 or $200,000," says Jim Ladner, national sales manager, Landoll Corp. "It isn't like 20 years ago when they were a third the price."

The decisions you make now can have consequences well into the future. "In most cases, we have life cycle on our product of 15 to 18 years," says Ladner. "If you look back 18 years, what did the equipment look like? Keep in mind that the equipment in the construction field always tends to grow and get heavier. You need to look down the road and buy a trailer that is probably more than you really need, but will do the job for you tomorrow."

Ladner adds that no single trailer is likely to haul all of your equipment. You should designate trailers to groups of equipment suited to that trailer design.

As equipment designs change, it may also be more of a challenge to get by with the trailers you have used in the past. Fred McClure, engineering manager, Eager Beaver Trailers cites its 10-ton tag trailer as a unique example. "When we started building it almost 30 years ago, the typical backhoe that was put on it weighed 14,000 lbs. Today, the same series of backhoe literally grew in weight from 14,000 lbs. to closer to 18,000 lbs."

However, many contractors resist going up to a 12-ton trailer since they have to pay Federal Excise Tax (FET). "The private contractor is still trying to hold onto the 10-ton trailer and not pay the FET on it," says McClure. "He has to be very critical on how he loads it so he is not overloading the tires and axles."

Understand ratings
It is important to understand trailer ratings and industry standards when comparing equipment trailers. "There is an important balance between the tare weight, the weight of the trailer and its ultimate load capacity," says Ladner. "If you build a trailer too light, it may not be able to haul the payload. But if you go too heavy, then you lessen the legal payload it can handle."

But there are often trade-offs between weight and durability. According to Odegaard, with lighter trailers, you have to keep the safety factor in mind. Trail King builds to Truck Trailer Manufacturer (TTMA) guidelines, which include a 2 to 2.5 times safety factor. "There are some trailer manufacturers that don't live by that safety factor," he points out. Their trailers can be constructed lighter because they are forfeiting the safety factor.

In addition, you need to make sure the load is compatible with the trailer's concentrated weight rating. "The contractor has to fully understand what he is going to haul - what it weighs and how much deck space it is going to consume," says Ladner. The weight over a given area determines the necessary concentrated weight rating. "If the contractor has a forklift that weighs 10,000 lbs. in 10 ft., he needs to know the frame is going to hold it."

Next, you need to consider how the trailer will be loaded. The entire GVWR is not intended to be carried by the tires and axles. A portion of the weight is actually assigned to the hitch. Deck length and axle placement need to allow the weight to be distributed so the weight at the hitch and over the axles is within acceptable limits.

You may also run across speed ratings. This is an area for caution. Some tires are rated for higher loads at a reduced speed. Even though federal law permits placing a dual rating on the trailer, McClure notes that many states do not recognize these ratings. So this is something you might want to avoid. He adds, "In most of our applications, the tire rating exceeds the axle capacity."

"I think the dual rating is kind of misleading to the customer," comments Odegaard. Dynamic forces on the trailer are greater at higher speeds. "The capacity of the trailer does go up at slower speeds, but we will not rate it that way. We rate ours at highway speeds."

Ladner agrees, adding, "If the road is safe at 70 mph, then that driver is going to want to travel safely at 70 mph. When you start to throw restriction in, then typically you get customer abuse on the product."

Finally, you have to realize that trailer ratings are absolute. "Operators sometimes think, 'I am only going to [exceed the rating] once a month,' " says Ladner. "It is just not safe when you exceed the ratings on the trailer, truck or piece of equipment."

By moving to a larger trailer that will handle the most demanding jobs, you will actually get longer life. "Even though you might invest a little more money up front, you will get the return back with the service out of that product," says Ladner.

Trailer weight is not as critical as load capacity. "For example, a lot of people will buy our 20-ton tag trailer, but will only be putting from 10 to 15 tons on it," says McClure. "They can probably put only 17 tons on it legally before they are exceeding legal requirements of the tandem on the trailer."

The same trend occurs with lowboy trailers. "People will buy our 50-ton trailer, but they will put anywhere from 70,000 to 100,000 lbs. on it," says McClure. "They will have multiple pieces of equipment, and they buy the slightly bigger trailer just to have a trailer that could handle anything."

Deck materials expand
Oak and Apitong are traditional deck materials. "Oak is still the most common, replenishable wood you can put on it," says McClure. "Apitong is a significant upgrade. It is pre-dried and it doesn't warp."

But there are advancements taking place in alternate materials. "We are trying to get into some different kinds of decking for trailers," says Odegaard. "One is called Rumber; it is a rubber compound decking. Hopefully, with tracked equipment, the decks will last a little bit longer."

Another option is a bamboo composite. "We are testing both of these alternatives to Apitong," says Ladner.

The goal is to increase the deck life to more closely match the trailer life. "When you are talking about equipment that will last 15 to 20 years, if you stay with Apitong, you might be talking about two to four deck replacements," says Ladner. "Rumber is in the same 15- to 20-year life cycle. So the decking might last the life of the trailer."

Low cg and load angle
Low load angles benefit all equipment. This has led to innovations such as the traveling (or sliding) axle trailer, which was introduced in 1970. "It has been well accepted in the construction industry as a transport for 80% of the equipment used," says Ladner. "You can load low-clearance equipment really well, and you can haul multiple pieces on a deck that is up to 53 ft. long."

"The big advantage to the sliding axle is load angle," says Odegaard. "You get a much better loading angle than you do with a beavertail or a tilt bed."

However, the center of gravity (cg) is always a concern when moving equipment. "It makes the load a lot more stable and it is safer for the equipment operator to load if you keep the cg down," says Odegaard.

While tag and sliding axle trailers are popular with many contractors, there are issues with equipment that has a high cg. "With a tag trailer, you are loading above the tires," says Odegaard. "So you are probably starting out at 3 ft. high."

For example, about five years ago, Eager Beaver introduced a detachable trailer initially earmarked for paving equipment. It had a much lower approach angle in the front. "We are selling a good number of those trailers, and not just to the paving industry," says McClure. They are being used to haul multiple equipment, including excavators and graders that can climb the steeper angles of a regular trailer. "They find it is just much nicer to load on these lower profile trailers."

How to Tie Down Equipment on Trailers