Burschville Construction, Inc. turned to Felling Trailers to build a custom trailer to store its utility crews' tools and equipment on jobsites. 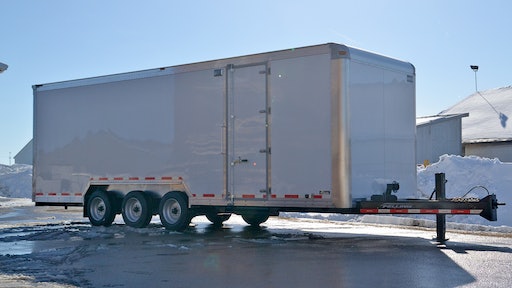 Burschville Construction, Inc. wanted a custom-built trailer chassis that would then be taken to a commercial truck bodybuilder to have an all-aluminum, enclosed body installed.
Felling Trailers, Inc

Burschville Construction, Inc., an underground utility contractor, needed a custom enclosed trailer solution. It would be used for their utility crews to store tools and equipment on jobsites along with having the ability to move it easily and quickly. In the past, their crews had semi-van trailers for this purpose. The semi vans did the job but were cumbersome to use as they required stairs to get in and out and when it was time to move on to the next jobsite a semi-truck had to be scheduled for the move.

The solution was to be a custom-built trailer chassis that would then be taken to a commercial truck bodybuilder to have an all-aluminum, enclosed body installed. A challenging build, too much flex and twisting of the frame would transfer to the structure leading to the eventual failure of the aluminum body, a stiff frame would be needed.  A typical drop deck trailer has most of the load centered on, or near the mainframe rails. Another challenge to overcome would be making sure the perimeter of the chassis' frame would be strong enough to support the weight of the body as well as shelving units and other items that would likely be placed along the side walls.

Burschville looked to Felling, currently having five deck over Felling Trailers and have owned several in the past including other brands. "Felling Trailers have held up very well, they pull great down the road, and when we have any issues, they always take care of us. That is why we chose them to build the underbody of the enclosed trailer. This trailer had many hours of thoughts and ideas put into it before it was put into production. Mark Rapp, Felling' utility/telecom product manager, met with me to go over ideas, several e-mails went back and forth, in the end, Mark made sure all our expectations were met," said Richard Schendel, vice president of Burschville Construction, Inc.

The trailer chassis needed a GVWR of 24,000 lbs. so a triple 8,000 lb. axle set up was chosen. "With a 26.5 ft. bed length the 8,000 lb. triple axle set-up would be more forgiving in obtaining the proper tongue weight required for good towing characteristics than a 12,000 lb. tandem axle set up," said Mark Rapp. To ensure the strength of the perimeter of the chassis frame, Felling laser cut 3/8 in. steel plate and formed it for the structural support needed. Outriggers were installed every 16 in. – 18 in. being sure to line up with the cross-members between the mainframe rails. The structural plate also served as the floor outside of the mainframe rails as well as providing the strength to tie the body to the chassis. Along with this pull-out step, heavy expanded metal surfaces were provided at the side door as well as the full width of the rear roll-up door.

Once Felling completed the build of the trailer chassis it was taken to Ohnsorg Truck Body in Belle Plaine, Minnesota for the upper enclosure. “John Ohnsorg and his crew did an exceptional job on their portion of the trailer. I have had many people ask, where did you buy that trailer? With this new trailer, we can move the same tools and equipment with a Super Duty truck (as they did with the semi van). Our Foreman's have a company truck that can pull the trailer from job to job rather than having to schedule a semi-truck to move the trailer. The new enclosed trailer is much easier to get in and out of the job site using a pick up if conditions are not favorable. The tools are always with the foreman, so if something changes or an emergency comes up, they can take care of our emergency repair calls in a timely manner. Our municipal customers appreciate the prompt service," said Schendel.

With many trailer manufacturers located in the upper Midwest, when Schendel was asked why Felling was his brand of choice? He replied, "It is pretty simple. We have a local dealership 10 minutes up the road in Loretto, Minnesota called Lano Equipment that handles Felling Trailers. Our salesman at the time we bought the custom enclosed trailer was Bill Lano. Bill does a great job of making sure that his customers are taken care of. Bill is also the person that sold us our first new Felling trailer, and they have been great to deal with. Another bonus for us is that Felling is a Minnesota-based company that is only 70 miles from our office. We can get parts fast if needed, and they always make sure our trailers are built to our satisfaction. We own many pieces of construction equipment, and no matter which machine we own it eventually will have a breakdown or some minor issue. Lano and Felling both have taken care of us anytime we have had any problems."

Since the purchase of the custom enclosed trailer, Burschville purchased another Felling deck-over trailer. "We had some custom things added, and the trailer turned out the exactly how we expected," Said Schendel.