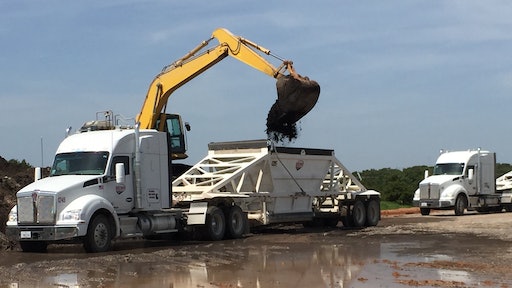 Brown Transportation’s 43 Kenworth T880s are equipped with 52-in. mid-roof sleepers. Owner Wayne Brown says it eliminates the need for drivers to deadhead back to company facilities each day from distant sites. 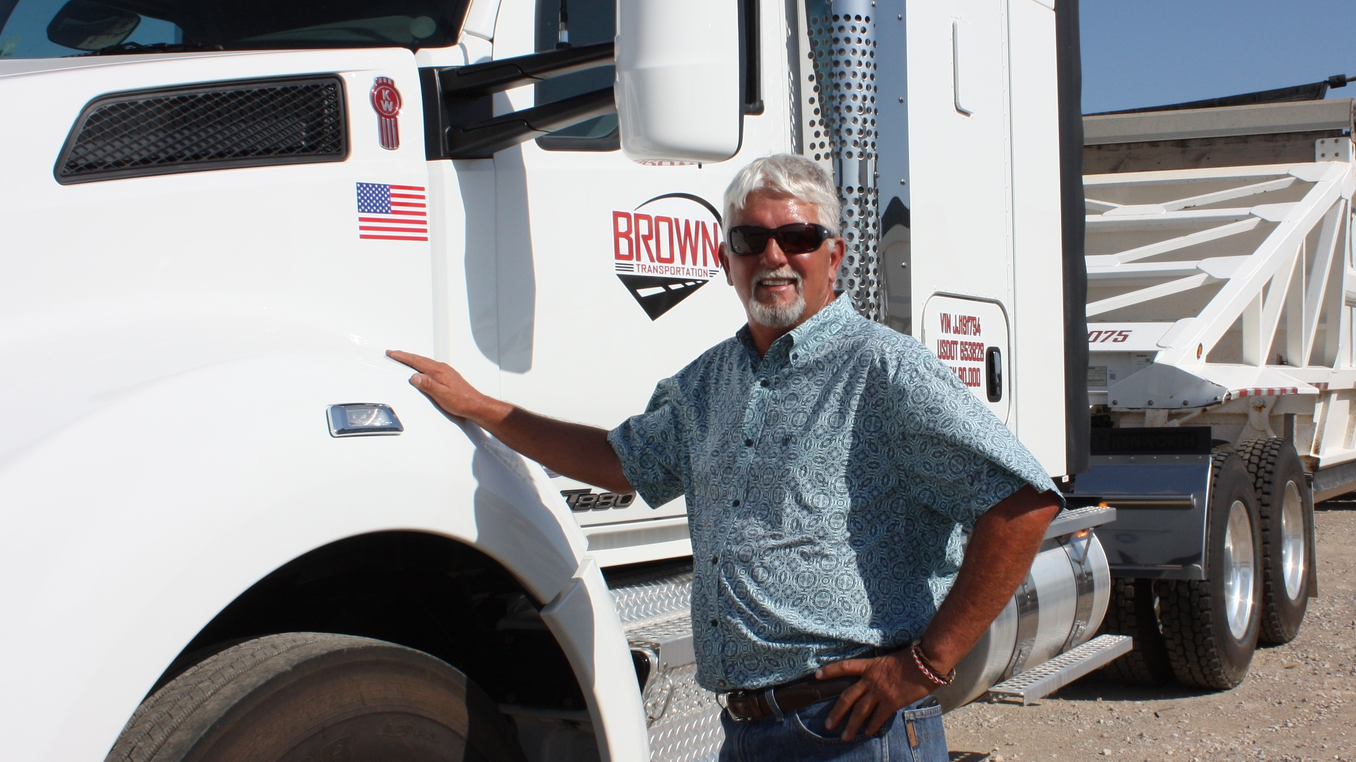 Wayne Brown specs T880s with 455-hp PACCAR MX-13 engines and Eaton Ultrashift transmissions to replace high-hood trucks.Wayne Brown started in the construction industry 43 years ago. His first job was as a truck driver for his family-owned aggregate hauler and he enjoyed his time behind the wheel. “I drove the traditional high hood,” he recalled. “I was always very fond of the look.”

So, it wasn’t surprising that when Brown bought his own rock/aggregate hauling operation in 2010 from his uncle, he went with the big hood to join others in the fleet.

The company operated 24 trucks when Brown purchased the Oklahoma City-based company. “Now we’re up to 80 trucks,” he said. “And we’ve made the transition from the high-hood to the Kenworth T880 with the PACCAR MX-13 engine. That decision is really paying us back. We’re getting up to 1.5 mpg improved fuel economy* and the trucks weigh in at nearly 900 lbs. lighter. When you run fully loaded with between four to 10 runs per day to a rock crusher, that extra payload really adds up.”

Brown Transportation’s operation is a little unusual in the aggregate business. “We’re very diverse, which helps us weather any changes in the business climate,” Brown explained. “We have 11 pneumatic trailers and provide sand for the oil industry in fracking operations. But that business can go up and down – it’s soft 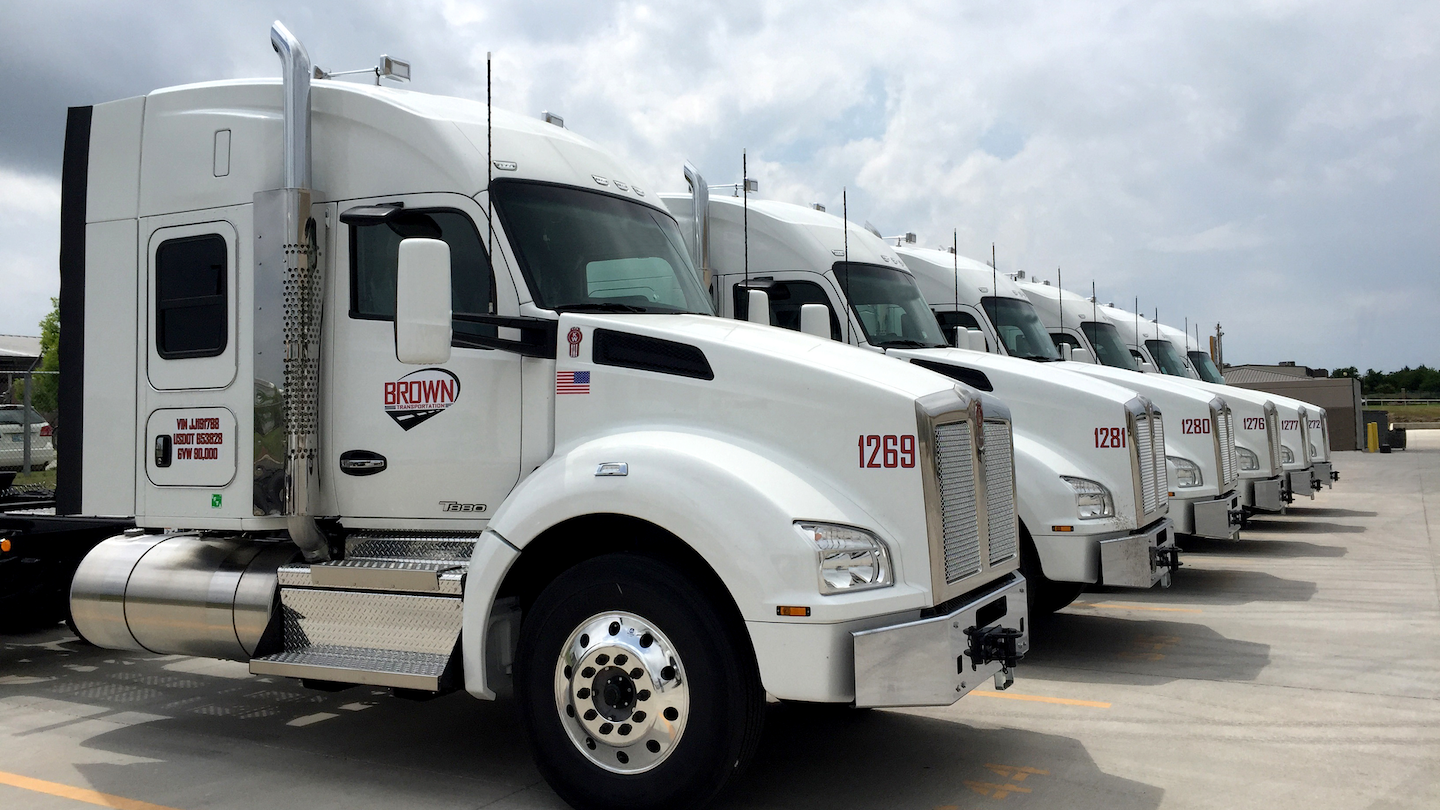 The T880s average around 100,000 miles annually. With up to 1.5 mpg improved fuel economy, each truck is saving Brown Transportation close to $10,000 in fuel per year. right now. So we switch over to highway construction, delivering aggregate and rock in our belly and end-dump trailers. And since we’re a large aggregate hauler in our region, we can handle jobs others can’t. It’s not uncommon for us to get a call requesting a large delivery. Due to our size, we can put more trucks on the job and complete a project in one day vs. three for our competitors.”

Another competitive advantage for the company is its decision on how to spec its trucks. “On our 43 T880s, we’re running the 52-in. mid-roof sleeper,” Brown said. “While our headquarters are in Ardmore, we have our trucks domiciled in Krum, TX, and in Davis, (OK), and Oklahoma City. On a Monday, the trucks might have a job 100 or more miles away, so they’ll work that site all week, making runs to a crusher or pit nearby. It doesn’t make sense to deadhead back to our facility every day. So, that’s why the need for a sleeper. This size gives our drivers the comfort they need, plus it’s tall enough so they can stand inside the sleeper.”

The sleepers feature a liftable lower bunk with a comfortable 32" x 80" pocket coil mattress and storage underneath. There is also upper storage on the back wall, including a place for drivers to hang their clothes and jackets.

Delivering Both Cost Savings and Comfort

Brown’s trucks average around 100,000 miles annually. “With the fuel savings we’re seeing with the T880, it means each truck is saving us close to $10,000 in fuel per year,” he said. “That factors into our total cost of ownership. We also look at cost of operation – and the T880s have been very reliable. Since we pay our 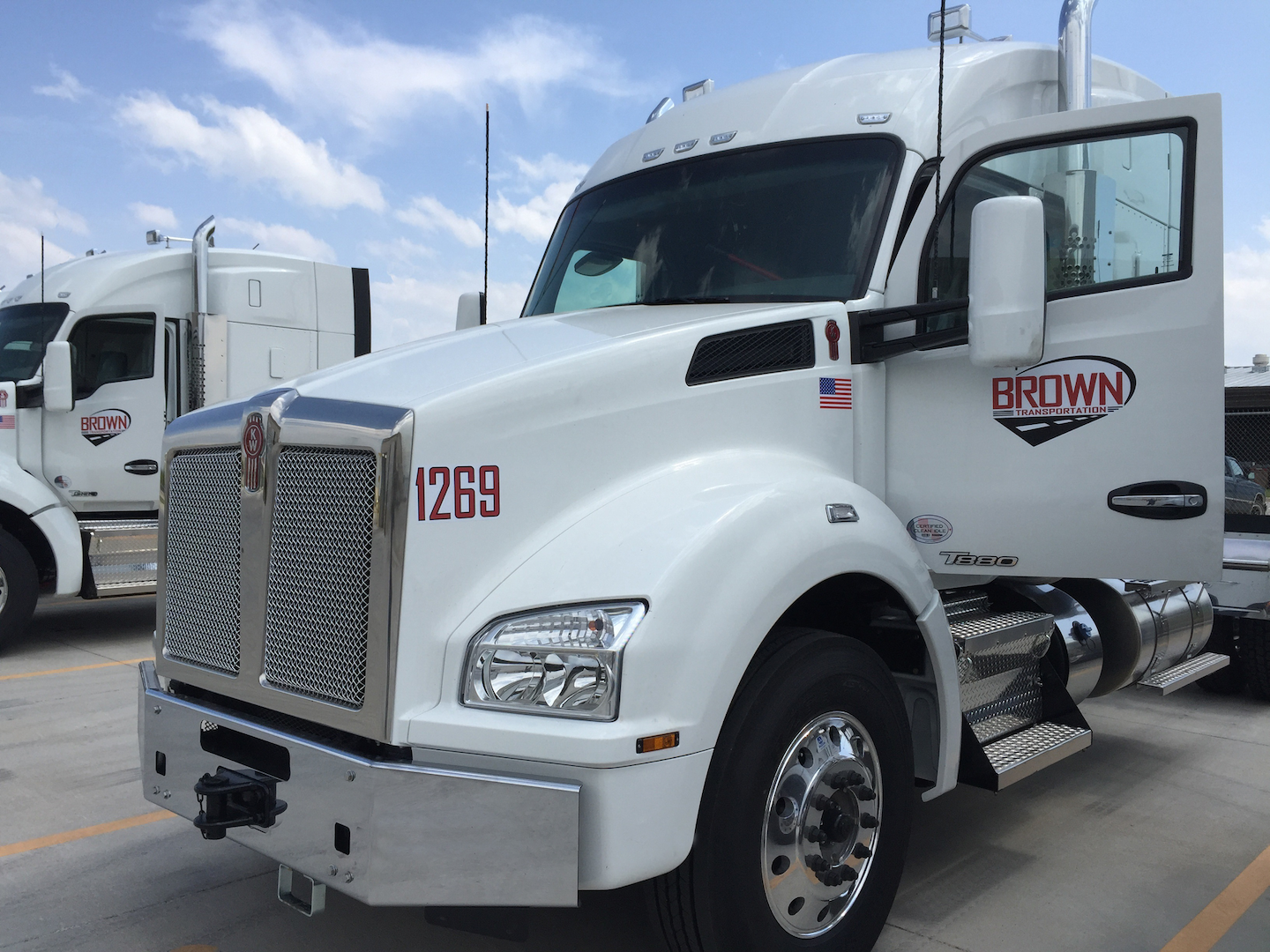 Trucks are washed every two weeks to ensure drivers always climb into a truck that looks brand new. This encourages them to take better care of the vehicles.drivers a percentage of the load, they have as much riding on the deliveries as we do. We expect our Kenworths to perform and we haven’t been disappointed.”

One spec change the company recently made was the move to the Eaton UltraShift transmission and disc brakes. “Our more senior drivers were used to driving 13 and 18 speeds and voiced concern when they heard we were switching to an automated manual,” said Brown. “But now, you couldn’t get them out of the truck – they’d never go back to a manual. They’re no longer using their left foot and right hand all day long shifting. They’re less fatigued at the end of the day.”

Helping even further is the quietness of the engine. “That (455-hp) PACCAR MX-13 engine is so quiet,” Brown said. “There is a big difference compared to the other engine we were running.”

Brown also said the trucks bring a sense of pride to his drivers. “We make sure the trucks are washed – even the engines – every two weeks. One of my pet peeves is I like to have a nice looking fleet, so every other Monday, our drivers climb into a truck that looks brand new. I like it and they like it. And they in turn take better care of the trucks.

"We really have a special relationship with our drivers," he continued. "We’re family-owned here, too. My son Chad is vice president of operations, and his wife, Sara, is our CFO. We’re small enough where we know everyone and have a true family culture. That, along with our equipment, helps keep our driver turnover significantly lower than others in our industry.”

*Individual fuel economy improvement will vary depending on use, road conditions and other factors.

Fleet Cost Management Starts with the Trucks You Buy

This record comes just six months after the lowest TCI reading ever recorded during the initial phases of the pandemic.
Dec 18th, 2020

Ritchie Bros. offers this list of inspection items to check out before you purchase your next used dump truck
Curt Bennink
Nov 30th, 2020

Looking toward uncertain pace of recession recovery in 2021, here are some ways to overcome the many unknowns that influence construction truck purchase decisions.
Curt Bennink
Nov 30th, 2020

The manufacturing plant recently marked two milestones, its 41st anniversary and the production of its 700,000th truck.
Nov 24th, 2020

This is the first product released under the Navistar 4.0 strategy and its Project Compass initiative – which focuses on flexible, modular design to meet customer needs, streamline the customer experience and deliver the very best support and service.
Navistar International Corporation
Nov 17th, 2020

TRATON will become the owner of all of the outstanding common shares of Navistar not already owned by TRATON at a price of USD 44.50 per share in cash.
Navistar International Corporation
Nov 12th, 2020

The group will define the next set of Daimler’s connectivity solutions and set up the framework for fast and scalable software development and product management.
Daimler Trucks North America
Nov 11th, 2020

These heavy-duty diesel engines from Cummins were built upon the proven architecture of their EPA 2017 versions.
Cummins Inc.
Oct 19th, 2020