December 2020 Class 8 order activity was the best performance since August 2018. 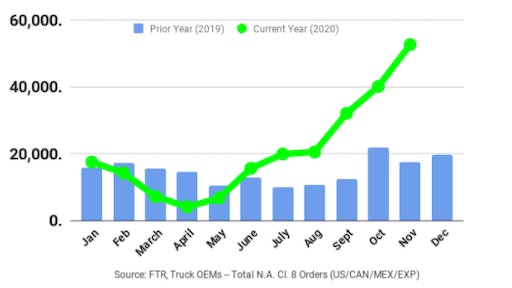 FTR reports preliminary North American Class 8 net orders exploded in November to the third-highest total ever at 52,600 units. December 2020 Class 8 order activity was the best performance since August 2018. Orders were +31% m/m and almost three times the level of November 2019. Class 8 orders for the past twelve months continue to increase and now stand at 250,000 units. ]

The tremendous volume reflects several large fleets placing their requirement orders for the entirety of 2021 to lock up build slots, which they perceive could be in short supply next year. Fleet confidence remains solid entering 2021, as carriers are getting their truck orders in early for next year's deliveries. Consumer-oriented freight remains vibrant and industrial freight is expected to improve in the coming months. Fleets are placing big orders anticipating needing more trucks throughout next year.

Orders should begin to wind down in the next several months as the large fleets conclude their seasonal ordering. The November orders are great news for the industry. These orders are pumping up the backlog which had dropped to a 3-year low in September. The higher backlog would indicate that the industry will have a stable, positive year in 2021. This will be a welcome relief after the shock and chaos of 2020.

Don Ake, vice president of commercial vehicles for FTR commented, “The Class 8 market is trying to rebalance after suffering through woeful order numbers early in the pandemic. The huge November orders mean that Q4 will be a fabulous one, regardless of what comes in for December and that portends well for the expected increase in production early next year.

“Fleets are still trying to catch-up with the jump in freight volumes resulting from the economic restart and the generous stimulus money which is being spent predominately on consumer goods and food. This will only intensify if there is a second round of payouts.”

Final data for November will be available from FTR later in the month as part of its North American Commercial Truck & Trailer Outlook service.