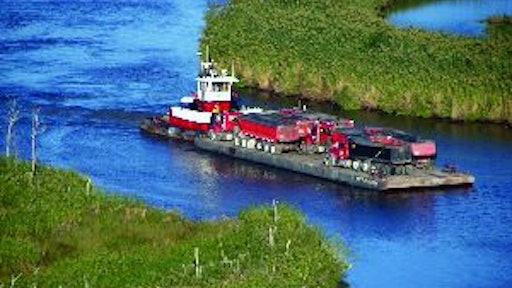 Initially, the client's tug and barge looked like the best way to transport hot mix to the island paving site. On closer examination, however, it was decided to rent a second barge to more efficiently carry twice as many trucks to the site at one time.

The secret to successfully completing a difficult project on time and within budget is due as much to the proper prior planning that you invest in a job as to the actual execution of the job,? says Shannon Elliot.

The senior vice president of H&S Construction Co., Lafayette, LA, says that a case in point would be a 2,000-ton Superpave airport project they recently completed in an isolated portion of Cameron Parish. In a post-

project analysis, Elliot said that the firm had invested twice as much time in planning as they did doing the actual work.

When the owner and management team of an exclusive private hunting lodge encountered a problem that needed to be resolved, they contacted H&S Construction ? not only an experienced asphalt paving contractor but a firm that owns and flies some of its own aircraft. Both President Gerald Hanchey and Elliot are FAA licensed pilots with many flying hours logged in various aircraft. So they had actual experience in flying in and out of similar airports.

The lodge is situated on an isolated island in the marshland south of Cameron Parish and is accessible only by boat or air. There are no roads to it from the mainland. The lodge is positioned on a natural ridge on Little Pecan Island, and because of it?s location and sturdy construction it was spared from the major ravages of Hurricane Rita in 2005.

The owner had decided to undertake some improvements on the property, which included some preliminary work upgrading the island?s 3,000-foot airstrip. The problem they were encountering was not with the runway. Its length and surface were satisfactory for the typical user?s aircraft size, weight, and horsepower.

The problem was the parking apron. When aircraft remained on the unpaved crushed shell-rock surface for several days they would tend to settle in. In addition, at the unpaved turnaround area at the end of the runway, aircraft preparing to take off (especially after or during a not-infrequent rain, particularly during duck hunting season) tended to slip or slide on the grassy surface.

H&S Construction understood this well, often flying their own aircraft to various jobsites. So they flew in several of their representatives to study the situation first hand and to design and propose a solution.

The proposal to fix these problems involved asphalt paving a parking apron large enough to hold two aircraft for several days at a time and to build, compact, and pave a well-drained turn-around pad for preflight preparation.

Logistics were about the only foreseeable hitch in the plan. Transporting the hot mix asphalt (HMA) at its optimal temperature to the site was the first. It would be a several hour one-way trip from the asphalt plant by both highway and water, assuming that everything went as scheduled. The lodge already owned a tug and barge for transporting comestibles and other necessities to its facility.

Normally, this would be no problem. Simply use the barge and towboat to shuttle everything including the paving crew back and forth. The glitch in this was the water; the tide fluctuates significantly in the marsh. While this might be perfect for waterfowl hunting, the planning would have to be exact, the execution of it precise, and, even then, it would require a bit of luck from Mother Nature.

The total asphalt involved would be approximately 2,000 tons. The material would be a Superpave mix in order to provide the facilities? owner with the best density, strength and pavement longevity. Initially, the client?s tug and barge looked like the way to go. On closer examination, however, it was decided to rent a second barge to more efficiently carry double the amount of trucks to the site. This proved to be a successful plan. At the end of the day, the roller crew would stay to finish the final compaction and then be ferried back to the mainland in a smaller boat.

H&S Construction elected to use their Caterpillar AP-655C for the job. This is a 41,000-lb. (working weight) rubber-tracked laydown machine with a 215-cu.-ft. hopper. It was outfitted with a Carlson EZ IV, 8-ft.-wide, electrically heated screed that extends out to 15 feet.

?As I said, the proper pre-project planning, with everyone involved in the job including the customer, made the difference,? Elliot says.

Dan McKain passed away last May at the age of 76. His ashes were spread over Lake Martin in the heart of Louisiana?s Cajun Country. ?It is a place we?ve enjoyed the sunset, photographing the moss hanging from the trees, and the water?s glorious colors, reflecting the sunset,? Gini said. Gini and Dan McKain wrote about a broad variety of topics, and were regular contributors to Pavement. Look for another article by Gini in the first quarter of 2009.