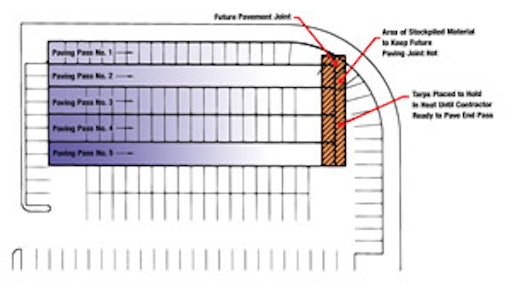 Contractors are constantly battling the elements to get their work done on their clients' schedules, but sometimes conditions are such that perhaps the job shouldn't be done. Or, even if it is done, the result will be a less-than-optimum job.

Such was the case when Spokane Rock Products had contracted to overlay a 50,000-sq.-ft. parking lot at NorthTown Mall in Spokane, WA. The parking lot was being used as the staging area for materials during construction of an addition to the mall, and it experienced a lot of construction traffic throughout the construction process. The mall addition was scheduled to open in mid-September; work on the parking lot overlay couldn't begin until late October; and the hot mix plant (owned by the contractor) was scheduled for shutdown on Thanksgiving Day.

So the first challenge was scheduling pavement repair and preparation, followed by actual paving, in a constricted time frame that the contractor knew was going to be upset throughout by inclement weather.

So the mall hired CHEC Management Systems, and through communication with Robert Vander Linden, operations manager for NorthTown Mall, the contractor decided on a plan.

"The main concern any time you're paving in cool weather is the amount of time from when you place the hot mix to when it gets too cool and you can't get anymore compaction," says James Curtis, president, CHEC Management Systems.

Cracksealing and patching
Curtis says work to prepare the 50,000-sq.-ft. area for an overlay was similar to any other job. The contractor handled more than 10 remove-and-replace repairs ranging from smaller patches to patches as large as 19 ft. x 19 ft. and 18 ft. x 28 ft. Curtis says shrinkage cracks are common in the northern Washington climate, and this job had its share at 10 feet apart and in 10 ft. x 10 ft. squares.

Spokane Rock Products started the repairs the last week of October, but because of rain the repairs weren't completed until early November. Eventually the pavement was ready: Cracks had been sealed, patches were done, and manhole risers had been installed throughout the area. It was time to pave - but Spokane Rock Products had only two weeks before its plant would shut down, and the last day it could get mix was the Wednesday before Thanksgiving.

Curtis says Spokane Rock Products was able to succeed on this job because it understood the challenges of the job, it was willing to adapt its paving practices to a new situation, and the crew was able to make the changes necessary and stick to them throughout the job.

"The primary concern is to keep the heat in the mat long enough to get the compaction you need," he says. "If you don't do that and you have low density you have air voids in the mix, and that allows water to get in there, and it can freeze and cause the pavement to fail prematurely."

The first part of the process involves scheduling, which was made easier by the fact that Spokane Rock operates its own plant and by the fact that there was not a lot of other paving taking place at that time of year.

"They had their own haul truck and full control of their own plant, which helped with scheduling," Curtis says. "But because of the temperature we had to make sure the trucks were on site and ready to pave when the crew was ready for them. At the same time we didn't want so many trucks on site that they were stacked up with the hot mix just sitting there cooling, even though they were tarped."

Then, once the process started, everything had to be compressed.

"They couldn't let the paver get too far ahead," Curtis says. "They slowed it down so the breakdown and intermediate rollers could achieve even compaction." He says two rollers were used on the job with the breakdown roller hitting the new mix 30 to 45 seconds after it was placed by the paver. He says that on a 2-inch overlay at that temperature the roller operators have less than 10 minutes to achieve proper compaction, "So you need to get the breakdown and intermediate rollers on it right away."

Preventing a cold joint
"When you're paving up against a cold joint, the new asphalt you place is trying to interlock and mesh against a joint that's already cooled to 150°F or so," Curtis says. "It's very hard to get the new mix to intermingle and mesh with that cold joint and that's where shrinkage cracks occur."

On some jobs the longitudinal joint is a concern because if the paving run is long enough the edge of the pull has time to cool before the paver makes its next pass. Curtis says longitudinal joints were not a concern on this job, though they could be on other jobs in similar conditions.

"The paving runs in the parking lot were not so long that the edge of the paving run would cool off before the next pass was made," Curtis says. "They were short enough so they could make the run, then back up and pave the next lane right away before that joint was cool. It was just not that big or that long a parking lot."

But the end joints of the run were a different issue completely and CHEC and Spokane Rock came up with an innovative solution that worked very well.

Where under good paving conditions the contractor could have left those ends open and simply paved across them on the last pass, that wasn't an option on this job. The joints would have been ice cold, and Curtis says shrinkage cracks would have been built into the pavement.

So to keep those ends hot to eliminate cold joints, Spokane Rock Products simply stockpiled material on top of the end of each run, then it tarped the stockpile. This was done at the end of each of nine pulls.

When the crew was done with three or four pulls and ready to tie those ends together, they simply removed the tarps and shoveled off the stockpiled material, which was tossed into a truck and disposed of because you don't want any cold mix into the hopper where it would chunk up. The stockpiled material kept the ends of the 2-inch overlay warm, and the paver tied the ends together in passes perpendicular to the initial runs. Then they paved another three runs and repeated the process.

"Because of the way they had placed and tarped the hot mix the end joints were kept hot so they essentially were paving against a hot joint," Curtis says.

Curtis says the tarping did take extra time and did slow the paving operation slightly, but at this point there are no joint cracks at this time, almost two years after the project

"The tarping took a little more effort but resulted in a superior product than what would otherwise have been placed out there," Curtis says.

"It was nice to work with a contractor who understands the problems he is facing and is willing to work with us to modify his typical paving operation to get the quality product that all of us were working toward for the mall."