How to prevent or deal with concrete freezing in the concrete pump, which can stop the flow of concrete through the pipeline 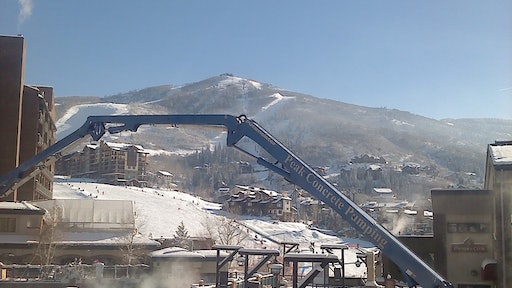 Peak Concrete Pumping worked on a concrete pumping project in Colorado where the temperatures were consistently below 0.

Cold weather pumping can present a variety of problems as compared to pumping in moderate temperatures. Most obvious, of course, is if the concrete freezes in the boom or other parts of the unit such as the hopper - thus stopping the flow of concrete through the pipeline.

One way to avoid this from happening is to mix the concrete using very hot water to keep the concrete from freezing during the delivery and waiting period. When priming, slurry should also be mixed with hot water. If the slurry freezes against the walls of the pipeline, it can restrict the flow of concrete causing a blockage. The pumping company can contact the ready mixed company and arrange for the first driver to be loaded with hot water for use when mixing the slurry.

Some companies will also wrap their boom pipeline with insulation. In most cases, the insulation is a foam tube cut to accommodate the pipeline, placed around the pipe, and taped together. The foam holds in the heat of the concrete allowing it to flow as normal.

Another way to keep the pipeline from freezing is to pre-heat the boom pipeline using the exhaust stack from the unit’s engine. Using an exhaust hose specifically made to withstand high temperatures, the boom operator slips the heat resistant hose over the exhaust pipe and places the other end into the tip hose of the boom - allowing its warm air to flow through the pipeline and exit from the hopper. With this procedure, it is important that airflow has an open pathway for exiting. Without an open path, the hot air from the exhaust will be forced backward and create excessive back pressure on the engine of the truck.

Concrete can also freeze in the unit’s hopper preventing it from entering the pipeline. When this happens, the consequences will be the same as if concrete froze in the boom. The concrete must be allowed to thaw and the hopper cleaned out before fresh concrete can be added.

Calcium chloride or other similar type additives are typically used to accelerate the setting of concrete. When using an accelerator, the concrete must be kept alive using the same techniques used for pumping on hot days. As temperatures during the day begin to rise, you should consider decreasing or stopping the use of an accelerator because the concrete can “flash” just like in hot weather.

Although calcium chloride accelerates the setting of concrete, if it freezes, the setting stops. Once the machine begins to thaw, the concrete will begin to set again even more quickly than when on the job because it is now in a warm area. Time should not be wasted when cleaning a machine under these circumstances.

When using a separately laid pipeline in extreme temperatures, the pipeline should be covered with insulated blankets or disassembled and stored inside at night. Preferably, the pipeline should not be left uncovered on the ground for more than an hour prior to pumping. If left exposed, there is a good chance the slurry will freeze against the walls of the pipe. Once the concrete flow is restricted, the remaining concrete will be pushed through the next pipe dry (without slurry). This could result in a blockage also called a “flash freeze”. To clear the line, all normal procedures for removing a blockage should be observed.

It is also possible to pre-heat a separately laid pipeline in much the same manner as pre-heating boom pipe. Using a high-temperature resistant hose, warm air is diverted from the truck’s exhaust into the pipeline allowing it to flow throughout the system and escape out the end.

If the motion of the concrete is stopped in a frosted pipe, the heat will radiate from the concrete so quickly that the entire line can freeze completely in a matter of moments. Usually if this happens, the pour cannot be completed until the slick line is replaced, and the concrete sitting on the job will often be rejected before it can be pumped. Many dollars can be lost when this occurs.

Never stand on ice-coated pipes or other round objects and use caution on the pumping unit’s decks and steps. Workers are reminded to wear the appropriate cold weather personal protective equipment and to always wear insulated gloves when handling icy pipes and clamps that can slip causing injury.

Extreme caution is especially needed during and after cleanout as all areas surrounding the pumping unit might be coated with ice as a result from the water that was used to clean out the pipes and accessories. Serious injury can occur as result from slips and falls.

Pumping concrete in temperatures as low as -10° Fahrenheit, and even lower, is not only possible but routine in many parts of the world. However, the pump’s manufacturer may prohibit use of the boom when temperatures fall well below sub-degree temperatures and the pumping company should be aware of the specific temperature restriction of their respective manufacturers. Use of the boom in extreme cold conditions will cause the steel of the boom to become brittle and cause it to crack from normal boom bounce.

Prior to the pump arriving on the jobsite, it is a good idea to communicate with your employees and/or the pumping company to discuss any conditions, such as extreme temperatures, which may have an effect on the safety and performance of the pour. Work to develop a plan which will not only ensure a successful pour but one that enables you to obtain the maximum benefits of placing concrete with a concrete pump.

Whether you're pumping concrete or using another placing system, if you're working in cold weather conditions you'll want to have products designed for that type of concrete work. Here is a small roundup of jobsite products for cold weather concrete placing.