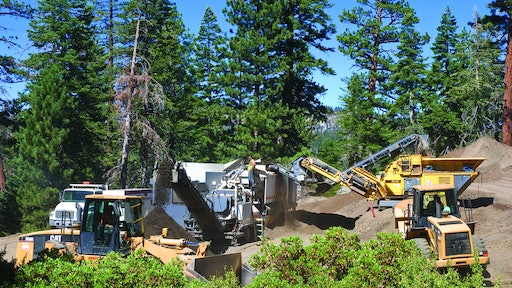 There, Pavement Recycling Systems (PRS) of Mira Loma, CA, hauled its KMA 220 nearly 8,400 feet above sea level to a clearing on Sherman Pass Road in the Sequoia National Forest.

After a quick set-up amid towering conifers, the unit began recycling reclaimed pavement of Sherman Pass Road, mixing it with cement and water prior to replacement of the material on the same stretch of road before the cement began to harden.

Because the material would cure within an hour and a half, workers were removing failed pavement, trucking it to the KMA 220, and then hauling and placing the cement-bound material to very close where it had excavated. After compaction the recycled material would serve as the driving surface on the former logging road, now used strictly for recreational access.

Aside from offering drivers the chance to see pine forests, mountain streams, and lands recovering from a 2002 forest fire, Sherman Pass Road provides visitor access to Troy Meadows, Fish Creek and Kennedy Meadows campgrounds. As the road climbs 4,000 feet, it winds between the northern boundary of the Domeland Wilderness and the southern edge of the South Sierra Wilderness.

During reconstruction, the lightly traveled road was subject to single lane closures at the sites where work was being done. However, reconstruction was limited to only the worst areas, where failed pavement was being milled out 6 inches deep.

"The U.S. Forest Service picked out the worst locations of the highway to be repaired," said Marty Castaneda, Jr., superintendent for PRS. "We mill about a thousand feet ahead of where the pavers start each day. Trucks bring the milled material to a stockpile next to our small crusher, which reduces it to 2-inch-minus gradation. It's placed into the KMA 220, processed with cement and water, and trucked right back to the paver."

The same trucks that brought the millings were loading up with processed material on their way back to the paving site, in a continuous round-trip that at one point was 14 miles one-way. "We're averaging 2,700 linear feet per day, 24 feet wide, in 6-inch-deep sections," Castaneda said.

While the hydrated, cement-bound material had a limited period of workability, PRS allowed the KMA 220 to keep a stockpile current from which it could load haul trucks headed back down the road. "We have about 45 minutes before the material starts to set up," he said. "We will keep milling 1,000 feet ahead, pave 500 feet at a time, and then back up, so we remain within our 45-minute window."

Part of the time utilization is keeping a stockpile of limited size handy at the KMA 220. "Instead of loading directly into the trucks, we are building a big enough stockpile so trucks can continually circulate back to the paver with full loads," Castaneda said. "But we won't allow it to sit any more than a few minutes on the ground or it will lose too much moisture."

To the crushed material within the KMA 220, PRS was adding 5% cement and 5% to 6% water. "We have storage tanks in back of the plant and water is being continuously trucked to the site," Castaneda said. As the machine produces 225 tons of cement-bound material per hour, a total of 18,000 to 20,000 tons of material will have been recycled by the end of the project.

Because the project provided 100% recycling of the existing road surface into a rebuilt, cement-bound pavement, it would appear to be the perfect "green" application for this environmentally sensitive location. But in fact, the owner had no choice but to recycle, as the two-hour haul times through winding mountain roads made anything other than recycling impossible.

"Due to the area's distance from any hot mix asphalt or concrete plants, it's more advantageous to recycle and reuse the existing roadway and subbase, and rebuild the surface," Castaneda said. "The KMA 220 makes it cost-effective and eliminates the logistics of having to move large quantities of material from lower elevations or the desert to the high Sierras."

While the reconstruction project was taking place miles on either side of the clearing where the KMA 220 was situated, the plant would stay right where it was, with trucks bringing and removing material no matter what their location was.

"We won't move the machine until we're complete," Castaneda said. "The portable plant is remaining stationary until the end of the project."

But moving the machine to that high elevation, while not effortless, was done without much ado. "It took some work, but it wasn't as bad as some other places we've hauled it, despite some hairpin turns," Castaneda said. "The KMA 220 is towable, and we just towed it up here and set it up. We then set up a cement silo and water system, and started processing."

The difficulty for the crews has been fighting narrow roads and mountain switchbacks daily, without a lot of room to work in, he said. "But we have been lucky in that we don't have a lot of traffic," Castaneda said.

PRS uses its KMA 220 to the fullest extent, for cement-, foamed asphalt- and asphalt emulsion-stabilized bases. It's employed for both cold in-place and cold foam processes.

"Throughout the year we will use it equally for emulsion, foam and cement stabilized recycling," Castaneda said. "In fact, it just came from an emulsion project for the city of Palm Desert, CA.

The KMA 220 is powered by diesel fuel, which runs a generator for the electrical processes of the KMA 220. "It's been very reliable," he said. "We use it around the year." The same KMA 220 was used in Yosemite National Park last year.

The new KMA 220 from Wirtgen America, Inc. builds on the success of its predecessor, the KMA 200, by adding a third axle to enhance the roadability of this popular portable cold mix plant. All three air-suspension axles have raising and lowering capability, as well as automatic, load-dependent all-wheel air brakes.

The KMA 220 portable cold mixing plant from Wirtgen will mix 220 tph of cold mix asphalt, without visible emissions and without requiring any EPA operating permits. Virgin and/or reclaimed materials can be processed using emulsions, foamed asphalt, lime, cement, polymer additives, fly ash and other materials. Because no heating is required, the mixing plant is virtually emission-free.

To make foamed asphalt Green Mix with the KMA 220, milled reclaimed asphalt pavement (RAP), excavated road base, and crushed recycled concrete aggregate (RCA) all can be incorporated up to 100 percent in cold Green Mix from the KMA 220.

“In many ways, Wirtgen's self-contained KMA 220, like its predecessor, the KMA 200, is the ultimate 'Green Machine'," said Wayne Evans, Wirtgen vice president, business development. "Its productivity is such that it can produce a 20-ton truck load of up to 100 percent recycled asphalt cold mix every six minutes. Contractors can locate this permit-free portable plant at or near their projects and cut dozens of trucks from long hauls, slashing traffic congestion and truck diesel exhaust."

Its features include its fully diesel-hydraulic drive of all components. Driving the KMA 220 is a completely modified, low-wear, twin-shaft continuous mixer, allowing a mixing capacity of 220 tph. The mixing plant is driven by a powerful diesel engine with an output of 175 hp, and all components are fully diesel-hydraulic driven. To ensure an ample supply of water, the capacity of the water tank is 1,188 gallons.

The precise sequence of the mixing process and all cold mix recipes are easily monitored and controlled by the Cockpit Graphics Center (CGC), an exceptionally user-friendly operating and control panel.

The KMA 220 is powerful when in operation, but can be completely transported on its low-bed trailer. The loading conveyor is simply folded for transport, and the operator's cabin is slewed into its transport position at the end of the low-bed.