There’s only one to make sure the 2010 Daytona 500 pothole fiasco doesn’t make a repeat performance in 2011 and that requires 50,000 tons of hot mix asphalt 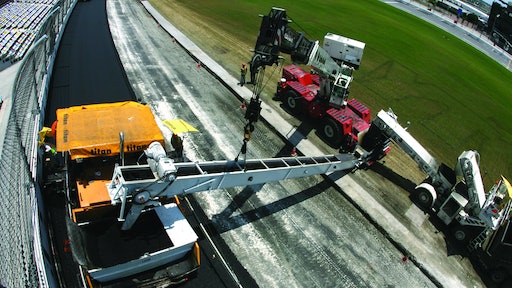 When completed, approximately 50,000 tons of mix produced at the track with a portable plant will be used to construct the new track, which must be completed by Jan. 1 to allow enough time for tire testing and preparations for the 2011 running of the Daytona 500 in February.

If you’re a big NASCAR fan, the pothole that stopped the iconic running of the Daytona 500 this past February was undoubtedly one of those “not-suppose-to-happen” moments in sports history.
It took nearly two hours to fix before anxious racers and fans could continue their annual ritual, and it sent track and race officials into emergency deployment mode on initiating a more permanent fix. The track was not scheduled for repaving until 2012, but the pothole incident proved to be all that was needed to move the rehabilitation work up two years.
Immediately following The Coca-Cola 400 race on July 4, Lane Construction Corp. began working on the Daytona International Speedway, the ninth racetrack the paving contractor has been contracted to rebuild.
The demolition of the most well-known racetrack in NASCAR consists of milling 42,833 square yards at seven inches deep in the front stretch, back stretch and pit road, as well as 36,000 square yards at five inches deep on the aprons. In turns one through four, 5,185 cubic yards of asphalt and lime rock will be raked off with a long stick Hitachi 450 and then hauled off for crushing.
Roughly 20,000 cubic yards of material will comprise the access roads being built behind the crash walls in the turns. This road is utilized by the Cat D-9s required to support the paving equipment in the 31 degree turns.
The competitive areas of the track will have four lifts of HMA placed during the construction process. The first bottom lift will be a 2-inch open-graded drainage layer that ends at the hinge point of the track. Running parallel to the drainage course will be a 6-inch perforated under drain. Placed over the drainage course will be a 2-inch base course, followed by a 1 1/2-inch leveling course, and a 1 1/2-inch wearing course. The skid pads and road course tie-ins will each receive a 1 1/2-inch overlay.
When completed, approximately 50,000 tons of mix produced at the track with a portable plant will be used to construct the new track, which must be completed by Jan. 1 to allow enough time for tire testing and preparations for the 2011 running of the Daytona 500 in February.
Equipment and personnel support from Lane’s Florida District, along with the previous track paving experience of the crew working on the project will ultimately guarantee a successful completion, according to company officials. John Rauer is project manager, Daniel Snow is project engineer, and Danny James is senior mechanical supervisor.
James has been in charge of the plant operation at the track and he’s well aware of the unique challenges in paving a racetrack. While his experience includes other well-know venues, like Darlington Raceway, Richmond International Raceway, and Talladega Superspeedway, which has steeper banked turns, James was informed that this particular track was different simply because it’s Daytona. What James quickly realized is that expectations were high. Numerous test strips and lab reports were required before one ounce, let alone 50,000 tons, of mix produce at the 400 tph mobile plant could be placed on the sacred 2.5-mile tri-oval.
The track was first paved in 1959 and then again in 1978. But the third and most extensive paving of the racetrack requires full removal of the two previous pavement structures, replacing the old asphalt with 7 inches of high performance HMA. The drainage, base and leveling courses are all constructed with mix containing a PG 76-22 binder. The wearing course will be constructed with a PG 82-22 binder with polymer modified additive to provide a more durable performance for the high-speed environment.
Lane’s experience in racetrack paving is evident by the ingenuity the company employs to execute banked curves.
With safety fencing removed and backfill placed along the outer safety wall to serve as a roadway for dozers, which are used to anchor paving equipment with a cable system, Lanes grading and paving crews can safely and effectively operate the heavy equipment on those 31-degree banked curves.
On this particular project, Lane employed an ABG Titan paver with tamping bars on screed, a material transfer vehicle to maintain a constant flow of material to the paver and accommodate easier transfer of material to the paver while working on the steep banked portion of the project.

Unique challenges
While paving high-profile racetracks is nothing new to the folks at Lane, Daytona did present its own set of unique challenges, according to Rauer.
“Working on a banked surface is always a challenge and while Daytona is not the steepest banked surface we’ve paved (Talladega has 32-degree banked turns and Daytona has 31-degree banked turns), we were required to pave from the top down,” Rauer notes. “Like any other track we’ve worked on, building the access road along the outside of the wall to accommodate the dozers we use to anchor equipment working on the banked areas is pretty straight forward. Having to pave from the wall down to the inside of the track is a bit of a challenge, but that’s what we were required to do because of the inconsistent joint we had to construct along the safety wall at Daytona.
“It’s generally easier to begin from the bottom because that lift helps hold equipment in place on subsequent pulls going up to the wall,” Rauer adds. “And it usually helps in achieving a tighter longitudinal joint just with the natural gravity pulling the mix down the slope. But on this particular track we had to place our first pull from the top in order to achieve a clean and consistent joint (longitudinal) for the second pull.”
As for mix design, the project called for a standard Florida Department of Transportation Superpave MS-2 design with a little more binder (similar to a 75 blow Marshall Mix design). The extra AC binder content was required to provide the performance characteristics of an asphalt structure subjected to the racing environment conditions.
Using a heavy-duty ABG Titan paver to construct the lifts, paving crews pulled 24-foot-wide mats to minimize structural longitudinal joints to achieve the smoothest surface possible.
“We were working with conventional PG 76-22 mix for the drainage and base courses and then we switched to PG 82-22 for the leveling and wearing courses for more stability and greater tire sheer wear performance of the track’s surface,” Rauer notes.
Achieving adequate compaction without excessive rolling of the various lifts was also a crucial requirement Lane crews had to meet, and they did with the tamper-bar screed used in the paving operation.
“We were able to achieve most of the density requirement with the tamper bars and that helped to minimize the number of passes required in our rolling pattern to achieve final density,” Rauer says. “The key to achieving the best (smooth and compacted) pavement quality on this project was to limit the amount of compaction required by our roller operators. Because of the stiffer PG binder required for the leveling and wearing mix designs, we’re using a Sasobit additive (usually associated with warm mix production) to aid in the compaction process. It just allows us the time needed to achieve full compaction before the mat firms up without having to work it real hard with our rollers.”
It’s that type of racetrack paving expertise Lane relies on to deliver the high expectations required for a project like Daytona.
When the green flag is waved signaling the start of the 53rd annual Daytona 500 on Sunday, Feb. 20, 2011, you can be sure racers and fans alike will certainly appreciate the performance the new track surface will undoubtedly deliver. ¦