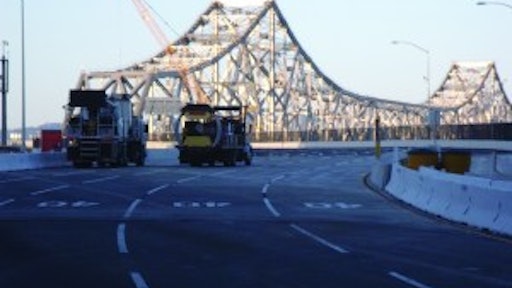 Chrisp Company was in charge of all pavement markings for the detour of the San Francisco-Oakland Bay Bridge. The detour is set to be in place until 2014.

The safety of bridges in the United States has become an increasing concern for both U.S. citizens and construction firms. One bridge that has been making recent headlines is the San Francisco-Oakland Bay Bridge. The bridge, which spans approximately 8.4 miles, was built in 1936. The bridge has two decks, an upper and a lower. Originally, the upper was for automobile traffic while the lower was for trains. In 1958, the lower deck was reconfigured for vehicular traffic.

In 1989, the Loma Prieta Earthquake caused major damage to the east side of the bridge. Now, the bridge is under a major reconstruction for seismic upgrades so history will not repeat itself. The upgrading project, commissioned by California's Department of Transportation (Caltrans) is the largest public works project currently under construction in the United States as of late 2009.

In the fall of 2009, the bridge was shut down for a span of five days in order to install a temporary detour to allow construction on the new section of the bridge, which is being built immediately to the north. To achieve this, the detour features a "slide in" section to the existing bridge to direct traffic away from the construction and onto the temporary bypass structure.

"The slide in section created an 'S' curve which would allow for demolition of the remaining structure of the existing Bay Bridge and allow for construction of the new bridge to Yerba Buena Island," says Paul Anderson, Chrisp Company's marketing and development manager.

Chrisp Company, Fremont, CA, was selected as the pavement marking contractor for the job - one of two dozen subcontractors working on the bridge, according to Anderson. The entire detour spans half a mile including 700 ft. of both the upper and lower decks of the bridge. Chrisp did some striping on the existing bridge in order to conform the striping to the detour markings.

Chrisp was commissioned to install lane lines, raised markers and reflective thermoplastic directional arrows and speed messages. During the project, Caltrans also asked Chrisp to install supplemental legends and symbols to help direct detour traffic. These included wrong way arrows and a speed limit legend striped onto the pavement. These markings were added as another way to alert motorists of the detour, Anderson says. Chrisp, which had additional material supply trucks on the job just in case, was able to complete this extra work during some unexpected downtime.

Because of the complexity of work and the number of subcontractors on the job, one week before the scheduled closure, C.C. Myers Inc., the general contractor, held a dry run. "This was a valuable opportunity for all involved to meet and understand how their operations fit into the overall plan and address any last minute issues," Anderson says. Chrisp decided to stagger the start times for its portions of the job to allow other contractors to finish their work before striping was done.

To work efficiently and on schedule Chrisp decided to mobilize its crews in two stages, Anderson says. The crews worked in a series of 12 hour shifts. On the second day of closure, a crew of five Chrisp employees started on the west end of the project, on Yerba Buena Island, to remove the old lane markings, layout, and install new lane delineation on both the upper and lower decks of the slide in section and the rest of the detour. Chrisp used two skid-steer loaders with removal head tools to remove the existing pavement markings. On the fourth day of closure a crew of 11 Chrisp employees was on site to install the rest of the lane delineation and the additional work Caltrans had requested.

In order to achieve the requested pavement markings, Chrisp used some unique equipment for the Bay Bridge striping. "Chrisp Company came up with a proprietary pre-marking design that evolved from a dune buggy frame. We decided to build what had been on a dune buggy onto a truck so that the operators were safer, had communication, and they could travel more easily," Anderson says.

These trucks feature an air compressor, paint tanks, and a computerized skip timer. The skip timer allows the operator to select a specific pattern for layout. "Raised pavement markers were specified for a special skip-dash pattern which required thermoplastic application for motorist recognition and durability on pavement surfaces," Anderson says. The specially-designed layout trucks allowed the operator to set that specific pattern before starting.

The layout trucks also feature a series of multiple booms and paint guns so the operators can select a pattern in the skip timer and layout multiple lines in one pass, Anderson adds. For this project, the operator lowered a boom to the left and one to the right and was able to layout three lines at once. A long line truck and a raised pavement marker truck followed, applying the thermoplastic striping and reflective and nonreflective markers according to the skip-dash layout. An airless walk-behind striper was used to install contrast striping for lane lines.

Striping was the final stage of the closure, so once all marking were installed Chrisp conducted one final drive through and then the bridge was reopened - only 90 minutes past the projected opening time.