Recognizing RAP for What It's Worth 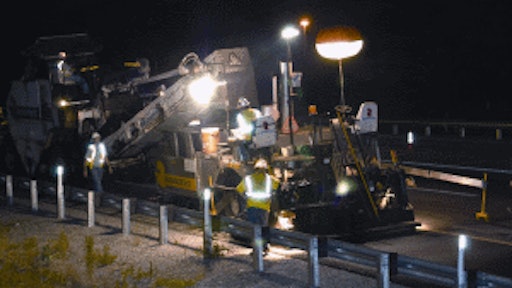 It's a proven fact that the use of reclaimed asphalt pavement (RAP) saves states money - big money. That's because RAP is worth the same as the virgin materials it replaces. And to mill, haul and process RAP costs only a fraction of the cost of virgin mixtures. Virgin binder costs are not expected to drop by much anytime soon. But with RAP, contractors can produce a lower cost hot mix and pass along savings to owner agencies.

Savings of up to $10 per ton of hot mix are possible by using 20% RAP and figuring the cost of virgin binder at $678 per ton, says Dale Rand, P.E., director of the flexible pavements branch at the Texas Department of Transportation (TxDOT).

Last year was a down year for new asphalt tonnage in the state of Texas; contractors placed 5 million tons of hot mix.

Prior to last January, producers in Texas did not use much RAP at all.

That's because RAP was only allowed if project plans specifically called for it. Only about 3% of the state's hot mix tonnage included RAP.

Beginning in January, though, the state is allowing 20%, 30% and 40% RAP in surface, intermediate and base courses respectively, if the RAP is fractionated, or divided into specific sizes. For unfractionated RAP, Texas is allowing 10%, 20% and 30% RAP, from the surface down.

Texas is not alone. State transportation departments including those in New Jersey, Arizona, Missouri, and Illinois either have increased their specified limits on RAP or are considering it.

And in the Tucson, AZ area, several local agencies have recently opened up their specifications to allow RAP.

It doesn't cost much to mill up asphalt. Working in soft aggregates and milling 2 inches deep, a Roadtec RX 700 (a half-lane machine) costs $340 per hour to operate. It can produce 334 tons per hour of RAP, for a milling cost of $1.02 per ton. If the aggregate is harder and labor costs more, the milling cost per ton of RAP goes to $1.45, says John Irvine, Roadtec's vice president of sales and marketing.

The national average RAP content for surface mixtures is about 15%, and the average for base and intermediate courses is about 20%, says Randy West, director at the National Center for Asphalt Technology at Auburn University in Alabama.

"Today, there is an opportunity to go much higher in RAP contents," says West. "Fifty percent is doable, or even more. Over the past few years, a number of new projects have been built with RAP contents between 25% and 50%."

One practice that makes higher percentages of RAP more successful, West says, is fractionation of the material. A producer separates the material into two or more stockpiles based on the size of the RAP particles. It's becoming more common to separate RAP into a coarse pile, with particles of more than ½ or 3/8-inch in size, and a fine pile with particles of ½-inch minus or so. That lets contractors use fine RAP in finer asphalt mixtures and coarse RAP in coarse mixtures.

"We range between 1.25 million and 2 million tons of hot mix per year," says Dennis DeVitto, vice president of asphalt operations. Some mixes are all-virgin materials, some have 10% RAP, and base and shoulder mixes have 30% to 40% RAP.

"All of our asphalt plants have two RAP bins," says DeVitto. "We screen it to 1/2-inch by 3/16 inch, and 3/16 inch minus. The finer material has more asphalt content, so that allows us to increase the RAP and decrease the virgin liquid that we run."

DeVitto explains. Suppose a hot mix design calls for 5% liquid binder. If the binder costs $400 per ton, that's $20 per ton of mix for binder.

In middle Tennessee, LoJac Enterprises Inc. runs 12 asphalt plants, and six of the 12 have been converted with Astec's Double Barrel Green warm mix asphalt (WMA) technology (see Asphalt Contractor, December 2008, p. 54). Don Chambers, LoJac president, figures RAP costs him $2 to $3 a ton for milling, $2 to $3 to haul it, and $1 or $2 per ton to crush the RAP and screen it.

LoJac splits RAP into two sizes: 5/8-inch chips and 3/8 inch-minus material. "You can blend those two sizes back into your mix and use more RAP because of it," says Chambers. He figures that using RAP saves him between $6 and $11 per ton of mix, depending on the percent of RAP added.

NCAT's West says warm mix asphalt technology does not necessarily allow one to use higher percentages of RAP. However, mixes with high RAP contents can be difficult to place and compact - and a WMA technology can help with compactability.

"The advantages of the RAP and WMA combination include enhanced workability of high RAP mixes, big economic savings, plus the triple environmental benefits of reduced (plant) emissions,, reduced energy demand, and conservation of natural resources," says West. (Warm mix asphalt results in a mixture that is about 240 to 270 degrees F, not the 300 degrees used for conventional hot mix asphalt.)

When a conventional hot mix plant runs RAP, the virgin aggregate reaches 500 or 600 degrees F. because it must heat the RAP, says LoJac's Chambers. But with WMA technology, you don't heat the mixture as hot. That means you don't drive off the light oils from the virgin binder or the RAP.

Using warm mix technologies provides a better film thickness of binder on the aggregate, and the RAP is not scorched in the process.

The hot mix was laid on a five-mile stretch of road that serves a regional landfill. The Tennessee DOT wants to see how the mix holds up under heavy truck traffic.

"If that mix holds up, the DOT may raise the percentage of allowable RAP," says Chambers.

On the NCAT Test Track in Alabama, where accelerated loading tests are run on various asphalt mixtures, high RAP pavements have turned in some excellent rutting results. Basically the results show that the more RAP a mixture contains, the less rutting you'll get. For example, under 9 million equivalent single axle loadings (ESALs) a 20%-RAP mixture using a PG 67-22 binder showed a rut depth of 8.6 millimeters. By contrast, a 45%-RAP mixture with PG 76-22 binder showed only 0.5 mm of rut depth after 9 million ESALs.

NCAT's West explains. As RAP percentages increase, the binder stiffness also increases. And stiffer binders are more resistant to rutting. West does, however, express some concern with cracking of high-RAP mixtures.

Dave Newcomb, vice president of research and technology at the National Asphalt Pavement Association, says several factors will contribute to success with increased percentages of RAP.

"Today we have better controls and management of RAP stockpiles and hot mix plants in general," says Newcomb. "We have better plant emissions controls, better heat distribution in the mixing drums, and better ways to size the RAP and feed it into the drums."

View
Ease of machine operation is a huge deciding factor when purchasing a new machine. Learn how VÖGELE Pavers truly work for you.
Follow Us