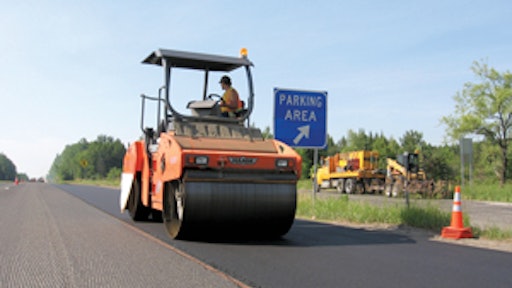 The HD 110 K combination roller joins four pneumatic tires at one end with a 66-inch steel drum with conventional vibration at the other, in an articulated platform with a total operating weight of 10 tons. In addition to the three combination rollers, in 2007 Pike also added a HD 110 VHV ("very high vibration") roller, and a HD O90V Oscillation roller to its fleet, a total of five new Hamms this year.

"We have a lot of tender mixes in this end of the state, and we've been reading up on the new technologies to find a solution," says Mike Mullin, regional coordinator for southern Vermont, Pike Industries Inc., Wallingford, VT, an Oldcastle company. "We've tried the combo rollers and the Ozzie rollers, and they seem to give us a much smoother ride, and we get our compaction a little quicker. They've really been a good tool for us."

Superpave shoving, pushing quelled
Almost all Vermont state jobs use Superpave, Mullin says, and that's a source of tender mixes. "We are seeing a lot of shoving and pushing - and some splitting - of the mixes when trying to compact with the regular vibe rollers," Mullin says. "We've found that, using the combos, we can knead things back together. And the Ozzie, because of its action, doesn't seem to make 'waves' as we've seen with other rollers."

If Pike lets a Superpave mix sit too long - waiting for it to cool down - it results in a lot of "splitting" in the mat, Mullin says. But if Pike uses a combo roller, and the Ozzie, the firm can get on the mat sooner and eliminate the splitting issue.

The splitting resulted in mat cracks varying from 2 inches to a foot long, Mullin says. "In the old days we'd have to put mix back in and roll," Mullin says. "But with the combo roller, the kneading action of the tires seals the cracks up, and the steel drum behind it seals it all off, we get our compaction, and have a good looking mat.

"With the combo roller and the Ozzie, we can get on when it's a little warmer," he says. "We are able to get our marks out, get our backrolling done and achieve our compaction. And here, like everywhere else, the compaction specs are the big number we watch."

Eliminates a roller
And there's another upside: the combination roller lets Pike get rid of a roller in the paving train without sacrificing functionality.

"With a combo we can actually eliminate a roller," Mullin says. "With an all-rubber tired roller, especially in the early spring and late fall, we have a lot of 'picking' problems. We don't seem to have that with the combo roller."

Pike's classic paving train will include the paver, an all-steel, dual-drum vibe breakdown roller right behind the paver, then the combo roller. Sometimes, when tender mixes are problematic, Pike will run a third roller at about 140 degrees F, and then clean up with an all-steel roller at the tail end.

"The Ozzie roller doesn't pound up and down like a regular vibratory roller," Mullin says. "It's a horizontal motion or rocking motion that compacts the mix without making the waves that a regular vibe roller does. It moves the mix around, getting compaction, without us getting bumps in the road."

The ripple or bump is a single "wave", cresting about 1 to 1.5 inches high. The ripple will move with the vibratory drum, but wherever the drum stops, the wave will stand.

"We would have to roll perpendicular to the wave, from the side of pavement, to get the roll back down," Mullin says. "But that itself would create a lot of bumps, because it will lap back over itself. With the Ozzie we don't get those big waves and can progress through the job without going back and fixing the bumps."

Vermont Agency of Transportation's density requirement is 92 to 94 percent compaction, Mullin says. "We've found that the Oscillation roller helps us attain compaction faster than with other rollers. In the future you will see more of them on the road because they do give you a smoother ride."

The Ozzie's ability to get on a Superpave mat at a higher temperature without stressing the mat is a big benefit for a smooth mat.

"You want to be able to get on the mat when it's warmer," he says. "With the other rollers, no matter what temperature we were trying it at, we were still having problems. With the Ozzie, we can get on it when it's still warm and workable, and get the results we need. For the past two years, the Ozzie has been consistent for us. We found we can get more work done, more lane miles done per day with the Ozzie, than we can with the vibes. It's definitely a technology headed in the right direction."