Proven insights that help you get young or inexperienced workers producing as quickly as possible. 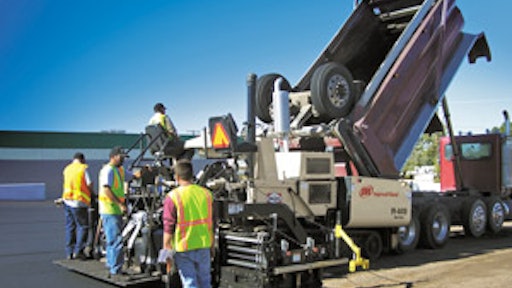 Training is the key to preparing operators of asphalt pavers and compactors for careers that will meet the industry's demands.

As the workforce ages (the Center to Protect Workers' Rights estimates the average age of the national workforce increased from 37.3 to 39.4 years between 1980 and 2000) younger and inexperienced workers will replace those now in the field. These young or inexperienced workers will feel nothing but frustration if they haven't been adequately trained for the job they are expected to do.

"A lot of training is done on the job," says Peter Fleming, training specialist with the Ingersoll Rand Road Institute, an education center for asphalt paver and compactor operators and mechanics. "There will be areas on any construction job that can't be laid by a paver so you have to have a crew that's good with hand tools to lay and shape the mat using lutes and shovels. In general, asphalt is a pretty forgiving material so training on the job doesn't have to be a disaster."

Teach the tools
Fleming says young or inexperienced workers should start their training on the tools.

Young people should begin on the rakes, lutes and shovels so they can see the broader aspects of how asphalt surfaces are constructed," he says. "Starting crews out on hand tools gives them an appreciation and better understanding of everything going on at the site and gives them the opportunity to watch all the different aspects of the job."

Fleming says contractors should start by explaining the purpose of each tool - shovel, rake, lute, hand tamper - making sure to cover the differences between the tools. "Lutes or rakes, for example, are used to move or spread and shape material in bulk over a short distance," he says. "The shovel is used to pick up and carry material in greater bulk over at least a slightly larger distance."

He says lutes weigh less than asphalt rakes, which resemble a steel garden rake. Rakes are open with the tines spaced wide apart. Used more so in Europe, asphalt rakes are used less often in the U.S. and most often seen when work is being done with heavier base material. Fleming says it's important to be careful with rakes because by their design they more easily collect and pull the larger stones through, leaving the fines behind. This can result in segregation and other mat problems. The rake may turned over with the tines pointing up and used as a lute.

Fleming says that once workers understand the tools themselves they need to be taught how to handle them correctly. "When using a shovel to move hot mix asphalt, for example, keep the back straight and use your legs," Fleming says. "This not only protects the back but also reduces fatigue during a long day."

He says contractors should show laborers the technique of how to place the hand holding the shovel against their knee, then use the knee - as opposed to the back or arms - to push off into the pile of hot mix. "Do this rather than arching the back," he says. "Remind them to keep their legs spread apart, with one foot forward and one foot behind to provide leverage."

"One of the main things they need to develop is an eye for levels. This is essential in laborers as one of their primary efforts will be to level off the mat or square it up," Fleming says. "Teach them how to turn the shovel over to use the blade as a lute to spread and shape the material they have just placed or to cast material over the fresh mat to correct any blemishes created by the paver"

Laborers also need to learn how to "bump" or "lute" a joint. Fleming says laborers should work from the cold side of the mat if it is safe to do so, facing the hot or just-placed mat. The hot side is generally overlapped 1/2 to 1-1/2 inches onto the cold mat. 'Bumping' the mat is to use the lute to push the hot mix back at an angle until you can see the joint ready for the compactor to compress the bumped material into the joint to increase the joint density.

"The idea of 'Luting' a joint is to try to seal the joint with the finer mix and remove the larger stones from the joint," Fleming says. "Removing these larger stones from the mat completely is especially important on a wearing course as broadcasting loose stones over the surface of a wearing course may give a segregated appearance to the mat once it is compacted. The mat should be left at a slight angle ready for compaction."

Hand tampers can be another valuable tool, but Fleming says contractors should encourage their crews to use plate compactors as much as possible before resorting to the hand tamper and then only using it to compact areas where the plate compactor can't reach.

"But when they do have to use it remind the crew to wear gloves and let the weight of the tamper do the work in providing the compaction" Fleming says. Workers should lift it and forcefully drop it straight down onto the mat (dropping it down on its edge might leave an indentation in the mat that may be hard to remove).

"But the lifting should be done with the back straight," Fleming says. "Working the hand tamper hard can result in blisters and sore arms even during the relatively short time it is used. It's also important to remind crews to keep their feet out of the way when tamping."

Teach the whole job
Fleming says it's important contractors mentor young or inexperienced workers, adding that contractors need to take the lead in drawing young people to the business.

"I think the industry will have to make working in asphalt more attractive to entice younger workers into the business," says Fleming. "There needs to be a career path for those who want it and are sufficiently intelligent to take it. Young people don't want to think they will be just shoveling asphalt for the rest of their lives. If they can see there are career paths and that maybe one day they can become a foreman, supervisor, superintendent, or even own their own company, it may attract them to the industry."

He says workers need to know that part of their job and training is to pay attention on each job to everything going on throughout the jobsite. "If you have an employee who is doing that, then he's a person to keep an eye on and to develop," Fleming says.

He says the basic path to promotion should be from hand tools to support equipment such as saws, sweepers, skid steers, or tack coat sprayer.

"This should be after they become proficient with tools, have had a good chance to watch how the equipment and team works together, and demonstrates a willingness to advance and assume more responsibility," Fleming says.

Proficiency = promotion
He says the next step, once they become proficient with support equipment, is to become the screed man or paver operator.

"On many crews the foreman is often the screed man and he can teach the employee on the job, showing him how to work the screed, how to keep an eye on the mat going down, how to watch and set material feed and the grade and slope controls.

"Once he sees the worker has learned and is confident with the controls he can ease him into the job and let him operate the screed himself, to match a joint for example," Fleming says.

He says that to be promoted on a crew employees need to demonstrate:

For young people already interested in working in asphalt, Fleming says contractors should gauge what sector of the trade their younger workers are interested in pursuing. "Give them every chance to experience all aspects of paving and compaction and let them take the lead in deciding what they would like to concentrate on," says Fleming.

Why – and How – to Hold Your Crews Accountable