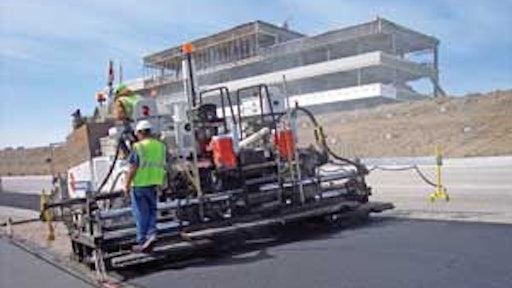 When a race car driver designs his own track you can bet he'll want it to be the smoothest surface possible. That's just what former NASCAR champion Rusty Wallace got when he designed the Iowa Speedway in Newton, IA thanks to the hard work of the paving crew of Manatt's Inc. According to www.iowaspeedway.com, the Iowa Speedway's website, after driving numerous laps around the track, Rusty Wallace said, "This surface is flawless; a great ride. It's simply going to offer a great racing experience and be the best racetrack in the world." The Manatt's crew might have taken an even more special interest than normal in providing the best surface since they are actually the primary owner of the Iowa Speedway.

The Iowa Speedway will be a groundbreaking racetrack in many ways.

"First of all it is the first ever track designed by a driver, and it will feature seven different racing venues including a drag strip, an asphalt road course and the recently completed 7/8 mile main oval track," says Brad Manatt. "The track will also be one of the first tracks to use the SAFER barrier system around the entire outside perimeter of the track and will have cameras with audio mounted into the surface of the track. The race track will have 25,000 permanent seats which can be expanded to 40,000 seats for larger events. It will also feature a unique multi level RV viewing area along the backstretch." It's apparent that the Iowa Speedway will be a model for future generations of racetracks.

To construct this state-of-the-art track Manatt's decided to use windrow paving.

"We do a lot of windrow paving, it's what our crews are used to and we own a fleet of belly dump trucks," says Donn Eide, general manager for Manatt's.

Using windrow paving meant that Manatt's needed a paver that could operate in the banked turns, reaching a maximum of 14 degrees cross slope, while pushing a windrow elevator. To handle this task Manatt's turned to Roadtec who offered their RP-195 10-foot rubber-track paver and its industry leading footprint paired with an Eagle 10 screed.

Roadtec also provided the necessary modifications to operate while sloped 14 degrees. These modifications included extending the fuel fill pipes, as well as adding fuel suction ports to ensure fuel would be drawn from the low side of the tank. Roadtec also extended the hydraulic reservoir fill/vent port. Roadtec made sure the modifications would not interfere with standard operations on future projects. Due to the high tractive effort of the RP-195 paver there were no problems keeping the paver up in the banks with the elevator out front.

Manatt's also made some modifications to the paver to better handle the HMA received from the windrow elevator. These modifications were primarily to stitch weld plate in and around the paver hopper to make the HMA flow through the paver better while in the banks. The modifications of adding a plate to the downhill side hopper wing to bridge the angle at the bottom of the wing also helped to avoid material accumulation in the hopper, and in the process avoid the possibility of material segregation.

An additional plate was also positioned over the dog house between the two conveyers to direct material onto the uphill conveyor and not the downhill conveyor. But modifications were minimal since the paver's anti-segregation design maintains a homogenous mix quality.

The overall pavement design was for three thin lifts and did not leave much room for error. A base course only two inches thick was applied over a tacked 10-inch-thick subbase of crushed stone. The 1 1/2-inch-thick binder course was then applied on top of this followed by a 1 1/2-inch-thick surface course.

These thin lifts did not give much room to correct any bumps in the base or underlying layers so smoothness had to start at the beginning. In order to achieve the highest smoothness possible Manatt's used a contacting ski on the joint side and a sonic non-contacting ski on the other. Compaction was achieved with a Cat CB 634C vibratory steel drum roller for initial breakdown, followed by two oscillatory Hamm HD 120 rollers. On the surface course, one of the Hamms was replaced with a rubber-tired roller.

When asked if the cameras to be implanted in the racing surface were an obstacle, Eide said, "not really at all, we just paved over them and then cut them out when we were finished."

Both the base and binder courses used a PG 76-22 binder and surface course used a polymer modified PG 82-22 binder. The surface course also consisted of 65-percent granite which was imported from Minnesota. The rest of the mix consisted of primarily limestone and sand which were available locally.

Overall the project has been a huge success. All smoothness and density requirements were met and final touches are being made to prepare for Indy Racing League track tests.

There has also been interest from many other race circuits. After all is said and done, there will be almost 85,000 tons of asphalt used at the Iowa Speedway at a cost of $8 million for the material. The first race on the track is scheduled for Sept. 15th.