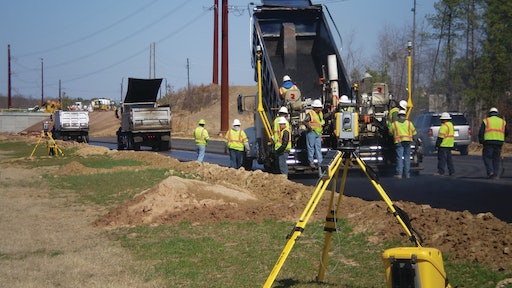 Since the project is fairly complex with Y-lines, frontage roads, and numerous exits and on-ramps, SPS930 Universal Total Stations are used to more-accurately measure position, cross slope, and heading of the screed to automatically handle the transitions, super-elevated curves, and frequently changing cross slopes.

In 1792, the location of Isaac Hunter's Tavern, a popular bar frequented by the state legislators, helped determine the location of Raleigh, NC. Raleigh is one of the few cities in the United States that was planned and built specifically to serve as a state capital.  The city has boomed tremendously from its barroom origins.

An indicator of the city’s swell has been the need for an expanded roadway system to serve Wake County. As early as the 1970s there have been plans for a Western Wake Expressway. This morphed into a 70-mile, interstate-grade beltway, known as the Raleigh Outer Loop, which will encompass Raleigh and the towns of Apex, Cary, Garner, and Morrisville. To complete it, there will be three other segments in addition to the Western Wake Expressway.

“We’re working on an approximately 14-mile stretch of the Western Wake Expressway running from Cary and looping south to Apex,” states Ryan Graham, project engineer for The Lane Construction Corporation, based in Cheshire, CT. “We’re responsible for laying asphalt, which will seal the sub-grade before a finish course of concrete is placed.”

The $30 million project for Lane Construction is part of NCDOT’s $460-million contract for completing the western segment of the Raleigh Outer Loop. The Western Wake Expressway is new construction and will be a toll road when completed. The prime contractor is Raleigh-Durham Roadbuilders, which is a joint venture between Archer Western Contractors and Granite Construction.

Lane’s portion of the project started at the beginning of 2011 and was expected to be completed by mid- to late-summer 2012. Lane has a 12-worker paving crew, a surveyor, a project engineer, and a superintendent out of its approximate 4,300 employees dedicated to the project.

Lane Construction not only is required to produce top-shelf asphalt paving but to coordinate well with the other contractors on the project. “With the help of Trimble technology, we’ve had no problem keeping pace with the contractor establishing the stabilized dirt sub-grade,” Graham states, “We’re using the Trimble PCS900 3D Paving Control System on our paver, supported by four Trimble SPS930 Universal Total Stations.”

Lane has a Roadtec RP-190 10-foot rubber-tire asphalt paver with a hydraulically extendable vibratory screed that will pave as wide as 24 feet with extensions. The Roadtec RP-190 is equipped with the Trimble PCS900 3D Paving Control System. Since the project is fairly complex with Y-lines, frontage roads, and numerous exits and on-ramps, Graham uses the SPS930 Universal Total Stations to more-accurately measure position, cross slope, and heading of the screed to automatically handle the transitions, super-elevated curves, and frequently changing cross slopes. Two of the SPS930 Total Stations are used to grade check the laid mat to confirm accuracy.

“The contract calls for the placement of 200,000 tons of asphalt, so we want to minimize waste and ensure accuracy across the three-lane highway,” Graham says. “We’re looking at two 12-foot lanes and a 14-foot lane, and all the on-ramps and off-ramps and acceleration lanes as well. The expressway widens out to four lanes temporarily in sections, expanding from 38 to 48 feet wide.”

The Trimble PCS900 Paving Control System is a 3D automatic screed control system for paving in a stakeless environment.  Smoothness is said to be improved because the machine is automatically implementing the design.

“The Trimble technology helped us immensely since our tolerances were very tight,” states Graham. “Technically, if we were more than one-eighth inch too high, we’d have to go back and mill and if we were one-quarter inch too low we’d have to pay for the extra concrete. So, we had three-eighths inch of wiggle room. I don’t want to even think about it, but our milling and concrete costs would be substantial without the Trimble systems, just because the road is that complex.”

Lane Construction has complete capability internally to build the digital 3D models, such as the one the Roadtec paver equipped with the Trimble system relies on. “Our company works on $1 billion worth of work annually so we have 10 model builders on staff,” states Joe Grenier, GPS manager for Lane Construction. “We invested the time up front to topo the existing conditions every 25 feet and compared that topo to the theoretical finish grade, and then added in the compaction factor of the asphalt.  We created what we call an ‘un-compacted model’ to ensure we could hit within that three-eighths inch tolerance we had.”

Grenier admits that learning the un-compacted model procedure and getting it ironed out was probably one of the biggest challenges the company faced at first. A second challenge was mastering the Trimble system for pavers. “We’re very familiar with building models and running machine control systems on earth movers, so taking advantage of that technology for asphalt paving was a natural extension, but still new to us,” Grenier says.

“But once we figured it out,” Graham adds, “the tangible benefits were apparent. By far the biggest benefit was to not have to go back and mill stretches of completed asphalt paving. With the tight tolerances on this project and with all of its complexities, it would be expected to have the expense of a milling crew out there all of the time—but we didn’t.  With the success we’re seeing on this project, we literally bought a Trimble PCS900 for a paver we have working in South Carolina and we’re looking at two additional systems.”

Grenier continues the thought: “The big reason why the paving control system is so valuable is that concrete is so expensive. We save a lot of money on milling and concrete material. If we are too low with the asphalt surface, then we would need to fill that with the more expensive concrete material.”

In implementing the Trimble technology on this complex project Lane has relied on the support of its dealer, SITECH Mid-Atlantic. “Our Trimble dealer has supported us every step of the way,” says Graham.

It’s unfortunate that when the Western Wake Expressway section is completed, motorists will never see the asphalt paving that Lane Construction completed. “When people are driving on it, they probably won’t realize all the work that went into what’s under that concrete, because they’re just going to see the concrete surface,” Graham says. “But that’s fine, all of us who worked on it will know.”

In a way, the asphalt subgrade becomes a time capsule created by Lane Construction and sealed in the foundation of the Raleigh Outer Loop that one day in the distant future will be uncovered. Until that day, the crew at Lane might say, “Enjoy the ride!”

Technology Keeps You Ahead of the Curve