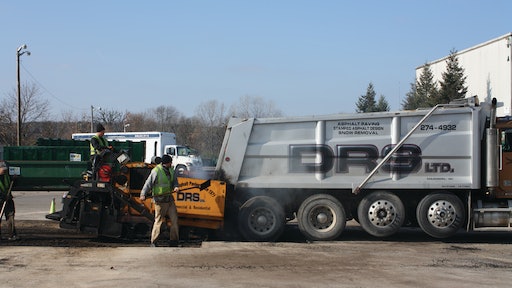 “They can’t shut the whole place down for any period of time so they just fix what they need to get done when they need it,” says Josh Strassman.

In this age of infrared pavement repair, improved cracksealing materials and techniques and the demand for low-cost get-it-done-now pavement improvements the remove-and-replace patching method can be seen as old school.

But often, as is the case with DRS Ltd. and its client Waste Management, full-depth patching has been the repair method of choice for 10 years – and for very good reasons.

“The Waste Management property is a transfer point for all the garbage collected in the Madison area,” says Josh Strassman, general manager and paving foreman, DRS Ltd., a Madison paving contractor that has been working with Waste Management for 10 years. “The quad-axle trucks come here and all the trash is sorted – some goes to a landfill, some to recycling etc. – so there are hundreds of trucks going in and out of here all day long every day. There’s a constant coming and going.”

And that, combined with the type of traffic on the parking lot, is what creates the need for the full-depth repairs though restricting the contractor’s access to the site. Strassman says that on virtually every parking lot it’s easy to identify the path garbage trucks drive on the property.

“In 90% of the parking lots we see the first signs of failure will occur along that path,” he says. “The failures present themselves there usually because the pavement was not designed for heavy garbage truck traffic or because the volume of that type of traffic is greater than what it was designed for. “Multiply that by the hundreds of trucks going in and out of this Waste Management location and this is probably the most abused parking lot you can think of.”

He says that like many properties, Waste Management can’t afford to shut down its entire parking lot (or even a large part of it) for major maintenance or reconstruction – yet they still need to have the maintenance done, as many as 10 R&R patches a year. But when DRS is done with the repair the patches are actually stronger than the surrounding pavement.

A case in point is a two-patch job tackled late last year by DRS (a sister company to Asphalt Reheat Systems which manufactures infrared equipment). The job for Waste Management involved a small 180-sq.-ft. area and a more typical 800-sq.-ft. repair. The contractor, which has been paving for more than 30 years, employs up to 40 people depending on the workload and does paving, cracksealing, infrared repair, and remove-and-replace patching on any pavement smaller than highways including roads, parking lots and residential driveways.

Strassman says the existing pavement has between 4 and 6 inches of asphalt atop a gravel base, but the pavement failures indicate that design isn’t strong enough to withstand the constant barrage of heavy trucks. So when it’s time to repair an area the company designs a full-depth repair to increase the strength of the pavement so the repair will last longer.

“The sheer weight and volume of all the vehicles coming in and out requires full-depth repairs,” he says. “We’re designing these repairs to last 15 or more years.”

DRS makes two specific improvements to increase the strength of the repair. First, DRS increases the depth of the asphalt. Strassman says 1 inch of asphalt provides the same strength as 4 inches of base, so DRS crews excavate an additional 2-4 inches beyond the asphalt to construct patches that are 8 inches thick. If he feels additional strength still is needed DRS installs a geotextile fabric.

On the two recent repairs material was placed by hand into the 180-sq.-ft. patch and compacted using a Wacker plate compactor. On the 800-sq.-ft. repair DRS crews used their more typical approach.

The asphalt and base are removed to a depth of 8 inches; the DRS crew assesses the base using the weight and movement of the skid steer to see if the base moves.

“A Bobcat is obviously not as heavy as an 80,000-lb. garbage truck so if the base moves under the Bobcat it will move under the garbage truck and needs to be reinforced,” he says.

Preparation for the paving took less than three hours.

He says once the base is stabilized DRS crews use a Mauldin 1750-C paver to construct four 2-in. lifts of a rubberized hot mix asphalt – up from three 2-in. lifts a few years ago because the client and the contractor agreed that the extra cost associated with thicker asphalt was easily offset by the added life span.

On large repairs where a paver and roller can be used down in the repair DRS crews construct a hot mix ramp from the surface into the repair to provide access for the equipment. Once the ramp is constructed the paver places the first lift, is removed from the repair, and a Bomag 120 vibratory roller accesses the repair using the ramp and compacts the lift. When density is attained the roller exits, the ramp is removed and reconstructed from the surface to the top of the new lift, and the process is repeated.

“The area is paved to include the ramp, then the ramp is removed so we can compact the entire area equally,” Strassman says. “The size of the ramp decreases as the depth of the repair decreases.

“We don’t want an 8-in. thick ramp where the bottom part of it never gets fully compacted, so we take out what’s there. Then we can make sure each lift is fully compacted,” he says. “You can’t build one ramp and butt 2-in. layers into it because you won’t be able to compact it properly.”

While the constant coming and going causes the pavement failures, it also creates the challenges for DRS of working in the midst of traffic.

“It’s a very, very high-traffic area so we make sure everyone on the crew is very aware of where we’re working and the traffic flow,” Strassman says. “We’re all vested and we try to close off the work area with barricades and cones, but that’s not always possible.”

So DRS tries to schedule the repair work in Waste Management’s off hours.

“We try to schedule work when they’re out on their routes and we try to be done before they get back,” he says. “If we can work around their schedule it makes it easier to get the work done and safer for our employees.”

A Lesson in Pothole Repair Economics