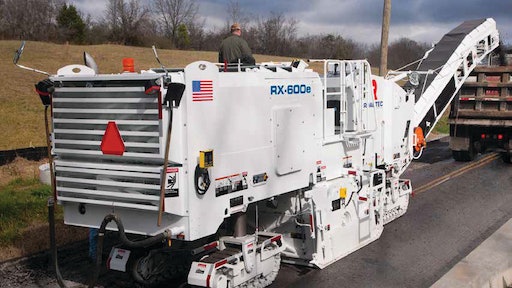 During the World of Asphalt in San Antonio in March, Roadtec had nearly its entire booth filled with its new equipment lineup.

Roadtec's mid-size SX-4e/ex soil stabilizer/reclaimer weighs less than 60,000 pounds and can perform road rehabilitation, cold recycling, or soil stabilization. Designed to be compact, the SX-4 can load and unload quickly and easily. The ergonomic design of the sealed cabin situates the driver in optimal reach of all important controls and offers a soundproofing system that protects the operator from excessive engine noise, as well.

The new Tier4i SP-200e spray paver features improved visibility, fingertip controls, fully adjustable seats, and an automated spray system. The unit offers a 2,100-gal.-capacity product tank which is heated by an on-board hot oil heating system. This high-capacity tank is well insulated so that emulsion does not have to be offloaded overnight.

Available as standard on e-series cold planers and e-series pavers, the Roadtec Guardian Telematics System consists of software, on machine viewing screens, and wireless signal boosters to send and receive data at the machine. Numerous functions such as engine data and fuel consumption can be viewed at the machine or on your computer screen from a remote location. Software is automatically updated when a new version is released.